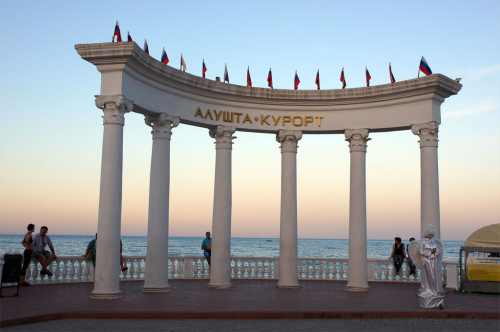 Alushta (Alushta) – a city on the southern coast of the Crimea in fifty kilometers from Simferopol (Simferopol on the map of the Crimea). The city itself is the center of the city district of Alushta (also called Big Alushta), which still includes the popular resort towns and villages of Rybachye, Solnechnogorskiy, Rock, Partenit, Privetnoye, Azure. The city's population is slightly less than 30,000. Despite the small population, the city has an impressive size and stretches for almost seven kilometres.

The history of the city began around the sixth century, built on the site of the fortress Aluston. Its ruins are still one of the main historical attractions of the city, but they little left. The status of a town settlement was granted only in 1902.

Today Alushta is among the most developed beach resorts of Crimea. Rest in Alushta is very popular and is second only to Yalta, while constantly competing with the rest in Feodosia and Yevpatoriya. This is really a good place for those who consider a holiday in Yalta too noisy, besides the beaches, the situation is slightly better, though the perfect of them here can not be called. Another advantage of Alushta - lower prices than in Yalta.

Rest in Alushta beach and entertainment. Of course, to mention here the beaches are good can be a stretch, but thanks to the sea, the promenade, well-developed infrastructure and attractions for tourists, this place has earned the love of tourists.

Beaches in Alushta are mainly pebbled, and not the most beautiful in the region. In the city centre, we can say that the beaches are not even there, so they are unsuitable for comfortable bathing. Along the shore is a concrete promenade, the beach is divided into sections of fifty meters of concrete breakwaters, a portion of which is constantly closed or belongs to sanatoriums and children's camps. The water is predominantly clear, at least clearer than in Yalta. The beach clean of debris. There is a whole range of water activities from rides on bananas and ending with rental motor boats. What was really bad is the lack of beautiful views and some beaches are just unpleasant to watch because of the rickety concrete blocks and rusty rebar sticking out. Cm. read more about the beaches of Alushta... 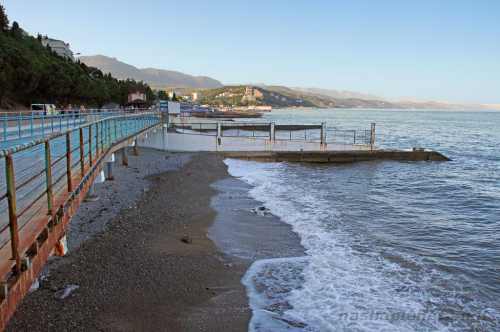 The beach in Alushta
deserted early in the season

But opportunities abound here. In General, for a city with such a small amount of the population of Alushta is a very active place. There's a cinema and a venue for cultural events – "Green theatre", with many restaurants, bars and night clubs; lots of fun for children. You can go to the water Park, aquarium, visit the Dolphinarium, the Park "Crimea in miniature" zoo. In the evening you can walk around the cheerful promenade in the city centre, where there is always something going on. Lovers "hang out" can visit one of the Nightclubs with modern music: "Kivi-Kivi" (Gorkogo str., 96), "the Cave" (Gorkogo str., opposite "Kiwi-kiwi"), Sound Club (Naberezhnaya St.), Archive (Naberezhnaya St., 6A), Morpheus, Disco club El Faro.

Attractions in the city quite a bit. You can see the ruins of the fortress of Aluston, temple, visit a few modest museums. But in the area outside the city there are several really places to visit. It is ruins of fortress Funa, tract Demerdzhi and the valley of ghosts, Alushta Stonehenge, waterfall Jur-Jur, the Museum of accidents on water. All these places can be visited without the help of travel agencies, and can be reached on local public transport. You can take a bus or trolley, and during the day to go see the sights of Yalta, Partenit and even Simferopol. For those who prefer organized tours vacation, travel agencies can arrange local excursions in any point of Crimea. Cm. read more about the attractions of Alushta... 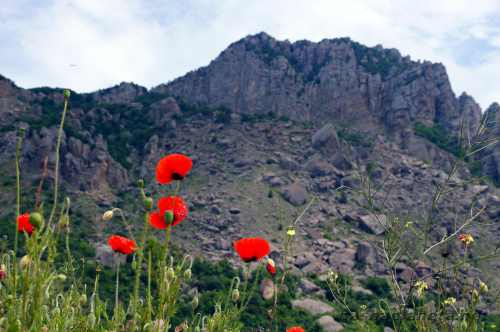 View on Demerdzhi and the valley

Another plus Alushta - excellent transport accessibility. Through the town runs the road from Simferopol airport to Yalta and Sevastopol, and to get here from the airport, spending no more than $ 100. Read more about how and what to get to Alushta...

The infrastructure is well developed, especially in the center. There is public transport (trolleybuses and buses), plenty of taxis. Major shopping centres here, but everything you need can be bought in small stores and shops, or in supermarkets. Prices in supermarkets are cheaper. With food problems will not arise: there are expensive restaurants and budget dining for the whole family. Along the beaches is developed with a promenade with cafes, restaurants, excursions, etc.

Acceptable for a beach holiday in Alushta season begins in may and ends in October. But in may and June the water warmed enough for comfortable swimming. Really warm water is only at the end of June, and then starts the high season actually runs from July to September. The belated tourists appear in Alushta even in October, but the temperature at this time is going down, sometimes the rest becomes uncomfortable.

A feature of the climate in Alushta is a constant wind, and, as a consequence of the wave. During large waves on the beaches are exhibited prohibiting boom.

Seasons in Alushta months, when is the best time to go

Current weather in Alushta and forecast

A storm warning. During a storm along the beach are placed warning signs and barriers prohibiting swimming. Do not neglect these warnings, people often die here because of a sudden onslaught of waves even when the sea seems relatively calm.

Bicycle rental. In Alushta you can rent a bike for 1000 rubles, 150 rubles per hour. Rentals on the waterfront, Lenina str., Gorkogo str. Through the Internet you can take the bike for 700 rubles.

A variety of tours. Almost all sellers discover the same schedule and prices, so there is not much sense to go and choose where it is cheaper and more convenient schedule.

First line. Do not try to settle on the first line of the sea, especially in the center. The prices are much higher but noisier. And no beautiful appearance, only a narrow strip of sea, if you're lucky.

Taxi. Cheaper to order taxi by phone than to catch them on the road.

Thanks for the feedback. Soon information about Alushta and the surrounding area will be renewed and will become even more. And yet, if you are looking for in these parts a place with a quiet, sparsely populated beaches, I recommend another look at Solnechnogorsk. Personally, I like it more than fishing, as something more comfortable out there, the beach is well-groomed, not as "dead" as in fishing. However if you on your car and tent in Solnechnogorskoye no normal camping as in fishing. And not to be confused with solnechnogorskaya Ulitsa. These villages are near, almost merged into one, but the beachfront in Malorechenskoye very tiny. This is my IMHO, of course, just recommend. ...
Re: Alushta and the surrounding areaAndrew Homutovskiy March 20, 2017
Resting in the azure from Rostislav(his phone+79788073534 ). The houses are modest, inexpensive. The nature of valid great. Among the shortcomings there is no infrastructure, the benefit of Alushta 3 km away. ...
Re: Alushta and the surrounding areaBob 13 August, 2017
Villa Alina Slutsky St. 33 Alushta, SC azure, Republic of Crimea does not the village of Azure. Mountain lake Castel? There is no such. There is a lake Mountain for Grape. ...
Re: Alushta and the surrounding areaadmin 13 August, 2017
Thank you for the clarification about the mountain lakes, it is, of course, about the mountain Castel corrected. But Villa Alina is still according to the maps located in the azure, rather than on the edge of the Professorial corner, almost azure. ...
Re: Alushta and the surrounding areaЮлия1209 19 December, 2018
The rest chose to 2018 in the Crimea. Long thought, in what city or village to go, which hotel or hotel to choose, read many reviews, listened to the advice of friends and decided to stay at a wonderful place called the Utes at the hotel Santa Barbara 3**. I want to say, earlier, was vacationing abroad - Turkey, Egypt, Italy, Spain, in the Crimea, in Yalta, Alushta, Gurzuf, traveled on tours the whole of Crimea, but such a heavenly place not seen anywhere else. The village itself attracts with its beauty and atypical. The Utes near Alushta, in my opinion, even, is the town of Alushta to Yalta 30 minutes, i.e. convenient location, You will be able to get in the direction of Alushta is very fast, and in the direction of Yalta. A tiny village located on the mountain attracts with its coziness, little Italy. Who would have thought that in Crimea exists???)))
Regarding, hotels and accommodation. Very responsive, friendly and welcoming staff. Feel every day care of yourself! We lived in a room with a sea view. Every day you Wake up with the sea, fall asleep with the sea! Fantastic! The hotel called Santa Barbara 3**, one of the most famous hotels of the Cliff, the village itself is often called Santa Barbara. The hotel itself is located right on the waterfront, i.e. out of the hotel and here's the sea, the beach! The room has everything you need. Pleased with daily maid service, change of linen and towels every three days! At the front Desk administrators will always help, prompt, advise and not least important, will give You their smiles and warmth. We had two meals - Breakfast and lunch. Breakfast and lunch we had at the restaurant Santa Barbara over the sea, the restaurant is right on ...
To reply or discuss the topic on the forum
POPULAR TICKETS
Sochi(Adler)3 698₽the Crimeafrom 5 791₽SpB3 380₽Kazanfrom 3000₽N. Novgorodfrom 4 400₽Samara3 970₽NvSB7 701₽EKB4 940₽VL-K21 323₽London3 270₽York21 255₽Barcelonafrom 7 318₽Beijingfrom 21 487₽Parisfrom 5 944₽Romefrom 7 864₽Top 100 tickets out of your airport here
⌃
✖Календарь недорогих авиабилетов