The Resort village in the Crimea 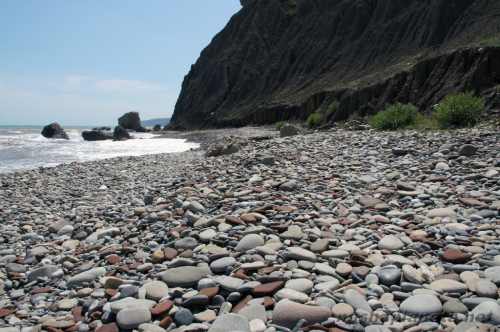 The resort is a tiny village in the Crimea on the Black sea, a part of the big Feodosia. The permanent population of little more than 300 people. Located 30 kilometers from Feodosiya and 15 kilometres from Koktebel (Resort on a map of Crimea), away from the main road. From the point of view of transport is a dead end, and it's very calm and quiet place.

The Resort village is the popular beach resort, and is not suitable for everyone. The place is very quiet, no entertainment, natural beauty and attractions, in addition to being near the Karadag reserve, also. About any nightlife or evening entertainment and to not think. Resort for those who don't need no hassles and entertainment apart from the beach, just want a quiet holiday by the sea. Even as an option – the Resort is suitable for families with children, but keep in mind that for children's entertainment, in addition to the Dolphinarium and several temporary attractions on the waterfront, not here. Young and active people looking for adventure and partying on vacation, here would seem boring. 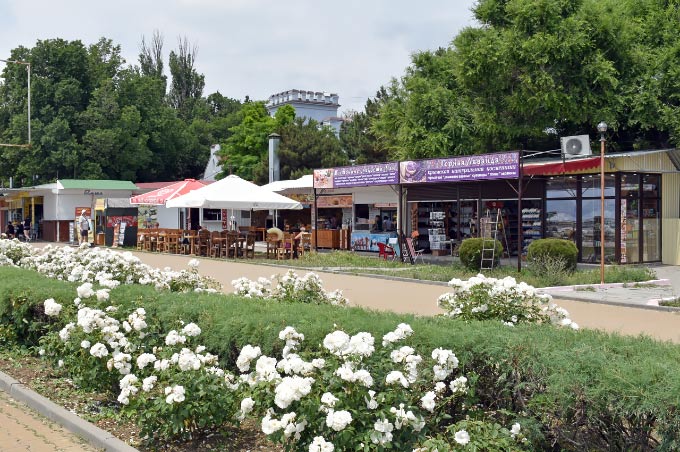 Tourist infrastructure is poorly developed. There is a post office, several shops, a pharmacy, on the waterfront in high season there are cafes and shops with tourist goods and Souvenirs, a simple entertainment for children. Here is just a few houses, opened a couple of budget guesthouses. Basically with tourists while not a lot of choice, and you have to stay in rented housing with a minimum of service. Finding a room or the whole house there is no problem: you just have to appear in the village, as the first counter you will be offered a place to rent.

Find and book hotels, apartments or apartments in the Resort through the following sites or search form Get:

To find hotels in the Resort 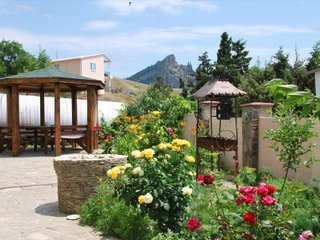 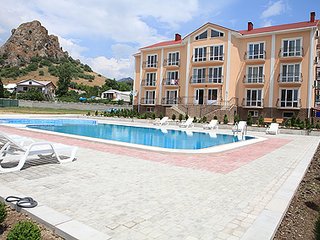 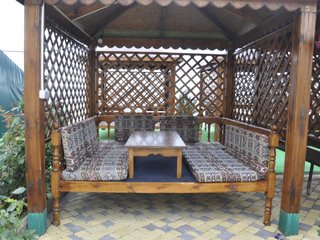 OtuzWhile people nothe price of the room from 1564₽Check price 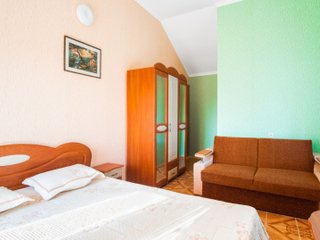 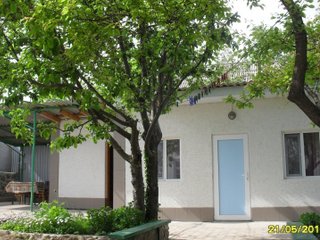 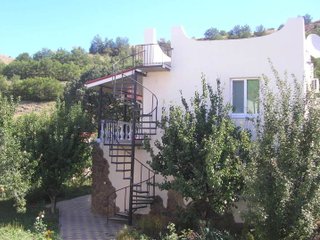 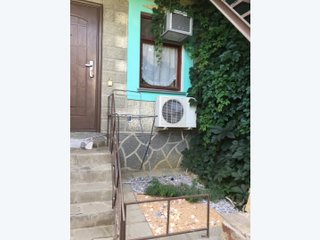 Kurortnoye hotels on the map

Resort is best visited between July to September. Although the first vacationers appear here before, the water in may-June is not yet sufficiently warmed up, besides the tourist infrastructure here takes place only in the high season and outside it, the promenade is almost empty, nothing works.

Seasons Resort months, when is the best time to go

The beaches in the Resort

How to get to the Resort

The resort is 30 kilometers from Feodosiya and 15 kilometres from Koktebel (Resort on a map of Crimea). This is a dead town, and there is not even a bus station. The easiest way to get here by taxi (the taxi ride from the Simferopol airport will cost from 3,000 rubles), but you can do the route by bus, although in most cases you will have to do a transplant.

Can also book a taxi from Simferopol airport to the Resort by using the search box, and driver will be waiting for you upon arrival:

Attractions and entertainment in the Resort

Next to the Spa is one of the most striking natural sights of the Eastern Crimea – Karadag nature reserve, and the village offers the best views of the mountain - an extinct volcano Karadag. The Resort is located the headquarters of the reserve – scientific biological station, from there start almost all the trails on it. On-site headquarters located Dolphinarium, aquarium, Museum and Park. On the other side of the village is the mountain range Echki-Dag is also an interesting place for the trekking trips, and it is possible to visit it independently. All the attractions of the Resort village over. But if you want to see more interesting places, on the waterfront, you can buy tours to all corners of Crimea. Also easy enough on the bus to Feodosia or Koktebel, and become acquainted with its attractions.

PPC still works and Park on site Parking, fine. Although you can pass other paths bypassing the checkpoint, I wouldn't, because the Rangers or I don't know how they go Commission, photographed the vehicles and issue fines, then send in the mail. But at the checkpoint are allowed to drive to camp on the beach for unloading/loading, and then return and leave the car near the checkpoint in the Parking lot. ...
Re: Theodosia and the surrounding areaFinn 6 July, 2017
They is there a law that took that car closer than a hundred meters from the sea impossible. ...
Re: Feodosia and surroundingsYuri 10 July, 2017
The trail along the Kara-Dag is not 300 rubles, and 600, and it is not the reserve has been... ...
To reply or discuss the topic on the forum
POPULAR TICKETS
Sochi(Adler)3 220₽Crimea5 297₽SpB3 380₽Kazanfrom 3 090₽N. Novgorod6 390₽Samara3 970₽NvSB7 880₽EKB6 185₽VL-K21 293₽London3 262₽York21 234₽Barcelonafrom 7 561₽Beijingfrom 21 897₽Parisfrom 5 855₽Romefrom 4 669₽Top 100 tickets out of your airport here
⌃
✖Календарь недорогих авиабилетов