Review of Vietnam in April 2013: Hanoi

Well, finally Asia. Hundred years there has not been (in the autumn 09g). This time the choice fell on Vietnam. Rather, the choice fell long ago, but always something interfered. And interfere always cheap flights to America, with all following from it consequences. Finally ended visa to America and you with peace of mind not to respond to tickets "Shemales" ( 11 Tr to new York) and safely do the route on Vietnam. The route was developed a few years ago and it looked so. Hanoi- Halong- Hue - Hoi An- Ho Chi Minh City.

Tickets bought, both international and domestic. Even booked for four days , the hotel in Hoi Ann ( on the "booking" was$ 200 and they had to use, and then they were gone) had to wait for the end of April.

Well, that long-awaited vacation. We at Sheremetyevo airport, waiting for landing. The plane was filled to 70 percent, so we were able to sit and sleep on multiple seats. About Aeroflot, I already wrote. Strong middling. Decent food, the entertainment system made the flight very tiring. 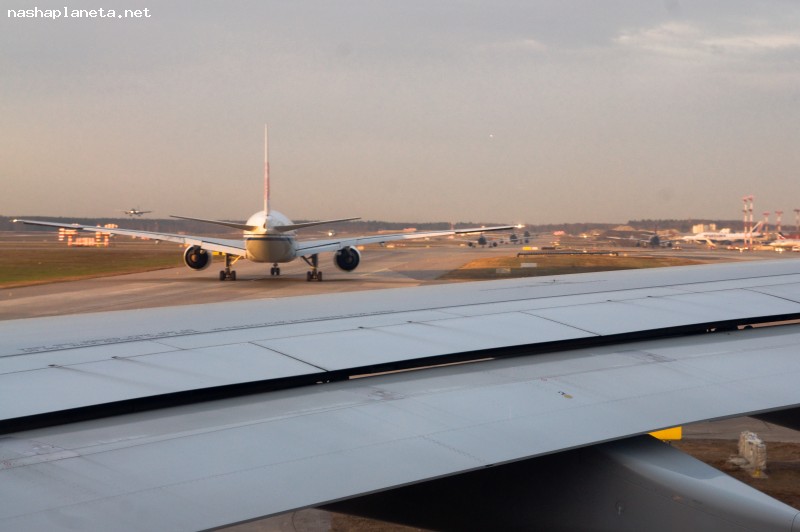 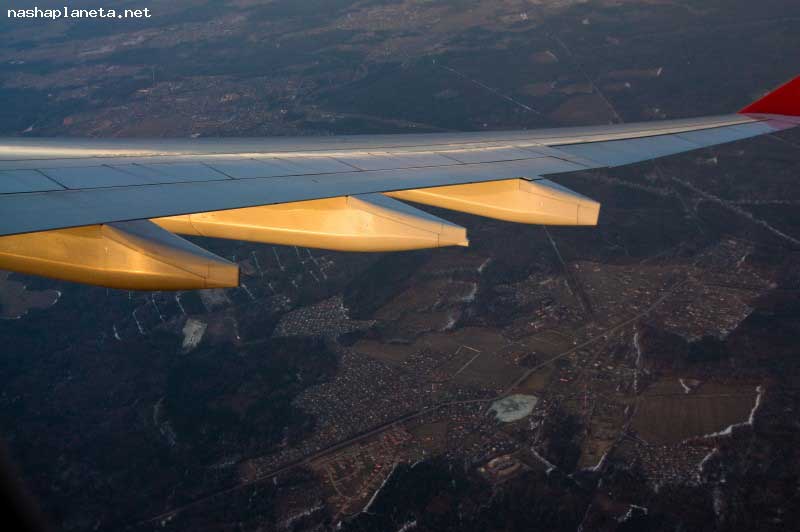 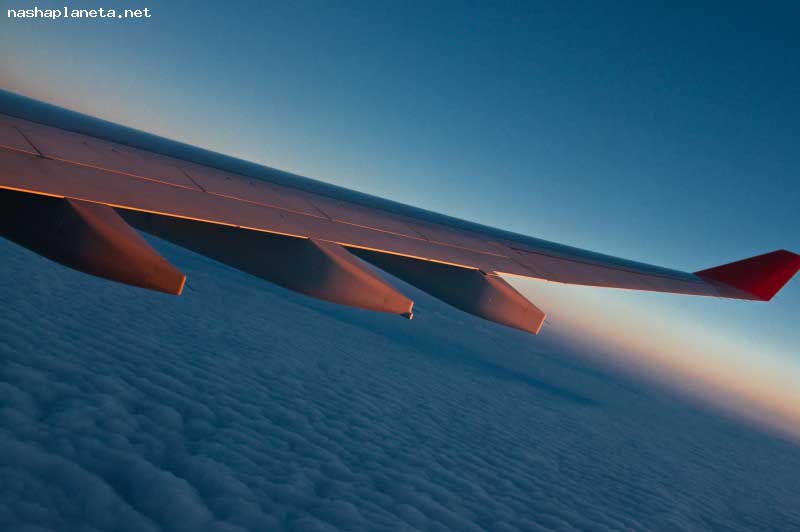 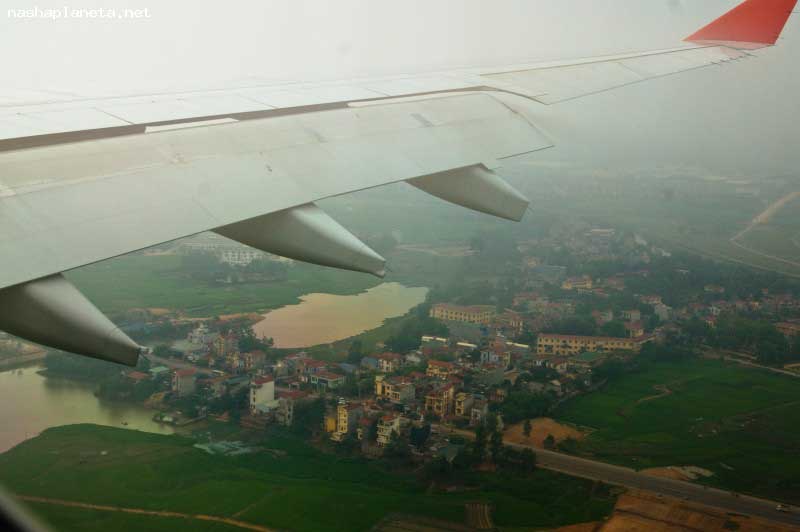 Nine o'clock and we're in Hanoi at passport control. When we arrived, we 21 th, and a return ticket from us to sixth. It turned out that one day we excess. Decided with visa not to bother, and to let it go. At passport control, showed a return ticket, waiting for the punch and went for the Luggage.Then the passport looked surprised. Logically, the correct date of departure was supposed to be may 5, and we put 4 th. Now it turns out that we do not have one extra day in Vietnam, but two. Let's see what happens?

Went outside, bargained with a taxi and left. On the way the taxi driver where it was called, handed me the tube, from the tube flowed mewing it. I listened to it, handed back, said, "funny" and we raced(60 km/ h) towards the unknown. Well, somewhere will bring, and there we will look! Forty minutes later were in place. The hotel is decent, expensive (30$), but the soul does not lay. Decided to go look for something else. a little walked towards the lake, I went to one hotel(15$), not much, but on the contrary, was a hotel with glazed doors and felt that there is a saving coolness. Went to this place. We were greeted as honored guests. Cost of this "tale"-30$, but if we booked Halong Bay from them, 25$. Outside go is not wanted and we agreed. Halong booked immediately for$ 70 per person for 2 days with an overnight stay on Cat BA, and two nights with them. One night, after the second service. Really enjoyed the hotel. All clean, solid, beautiful and well maintained.

Settled, rested and decided to start exploring Hanoi. At first glance, the usual Asia. It is this which have long been accustomed, on all trips. Hanoi's old peculiar. It is low, narrow and very green, and this is its charm. The first impression was good, liked the city. But is not indifferent to the traffic. Many call it Brownian motion, and I would have called it differently. This UNIVERSAL CHAOS is built into the law. Anarchy – mother of order! Self-regulating movement. Only three things prevent movement. These are the signs, markings and traffic lights. With the signs I do not understand why the state is involved in their installation. This is another post on the road which should be gone round. The markup should be wiped off the road as quickly as possible, so as not to confuse people, but the lights probably still have to leave. They work only on holidays, but when you turn them cheerful colored lights, the traffic turns into a noisy and fun ride. 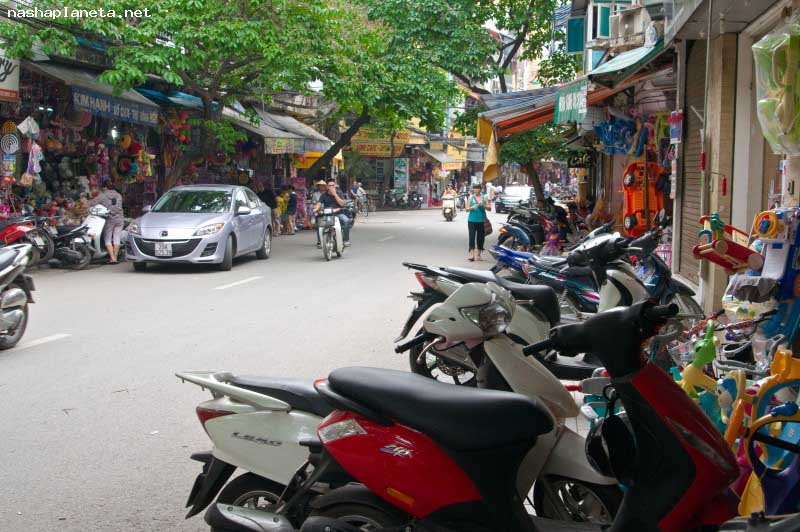 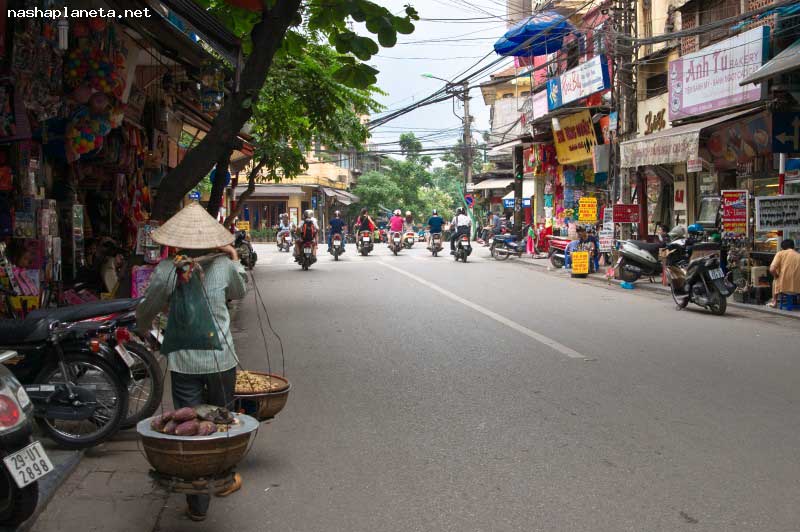 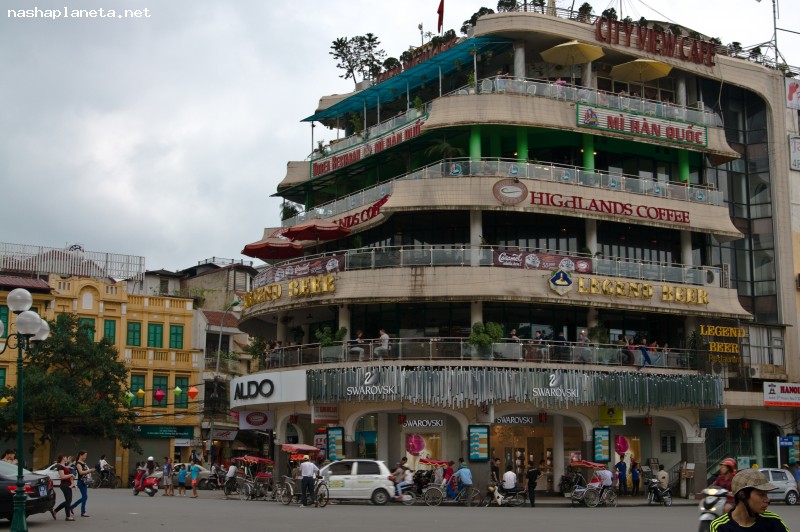 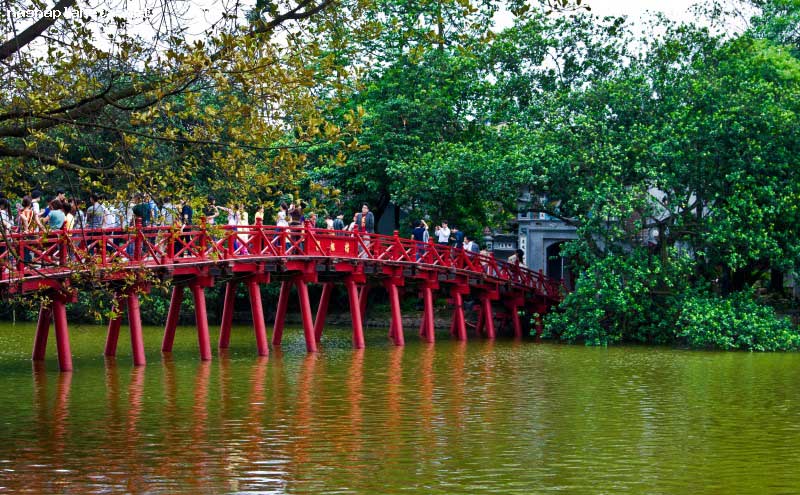 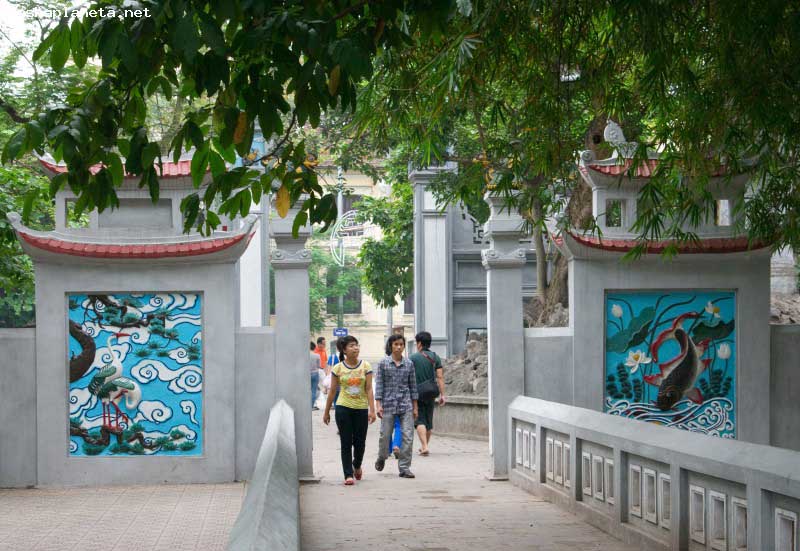 The rest of the day and the whole night was spent in exploring the lake and searching the Inn. Pedal a lot and on different taste. To eat tasty, not expensive and clean in very many places. To explain where to eat is pointless. Everyone is different and everyone has their own priorities. Ate, and walked in the room. Long flights and humidity a bit tired, and we went to sleep. In the morning we had Breakfast at the hotel ( included) 8 am we will come to the car and
will take us to Halong. Decided in the evening to come and went to bed. 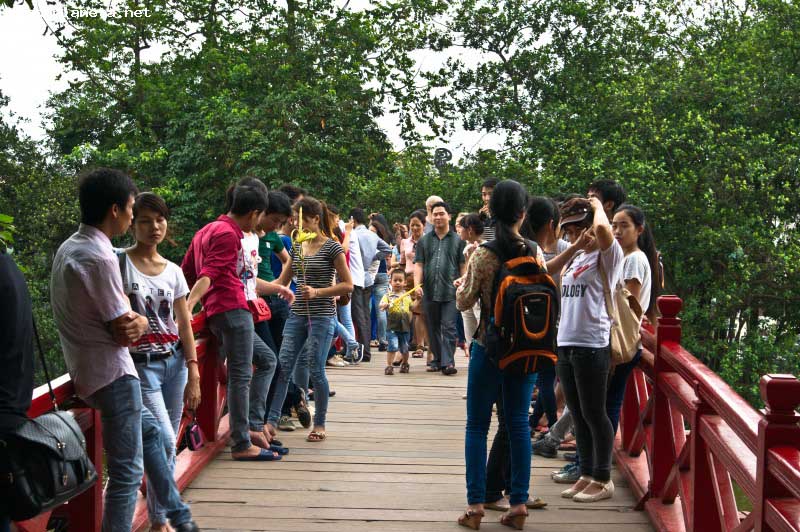 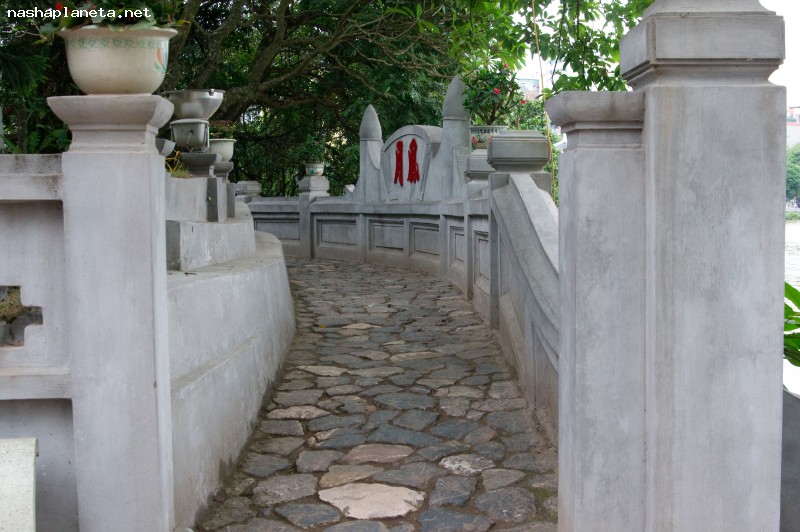 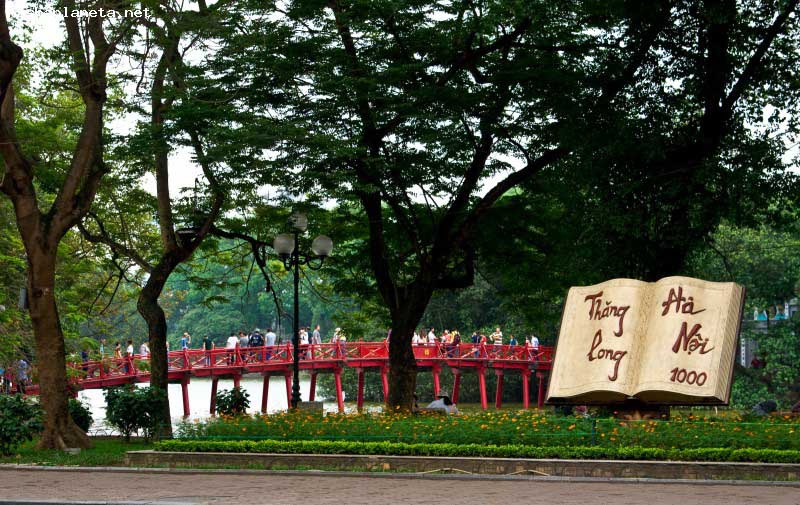 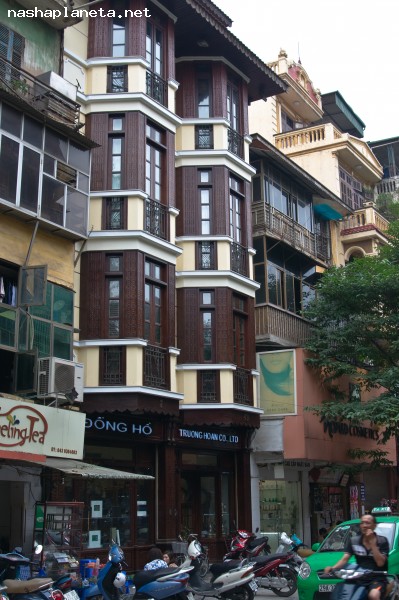 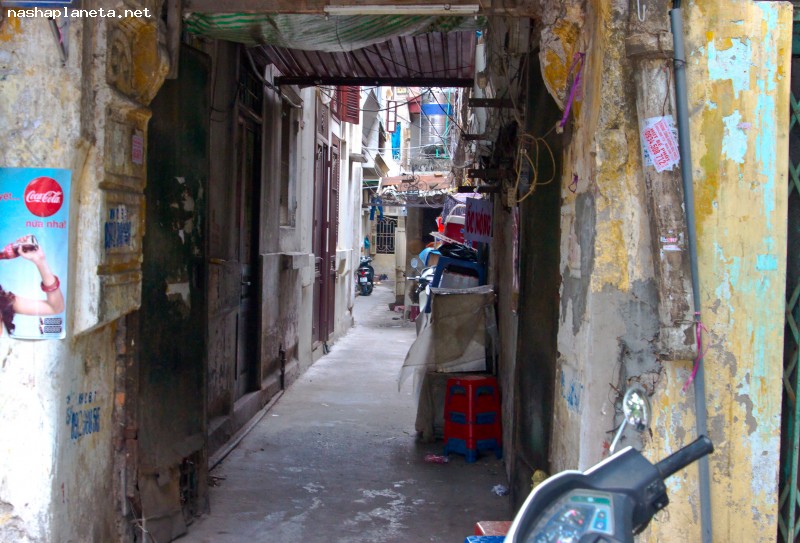 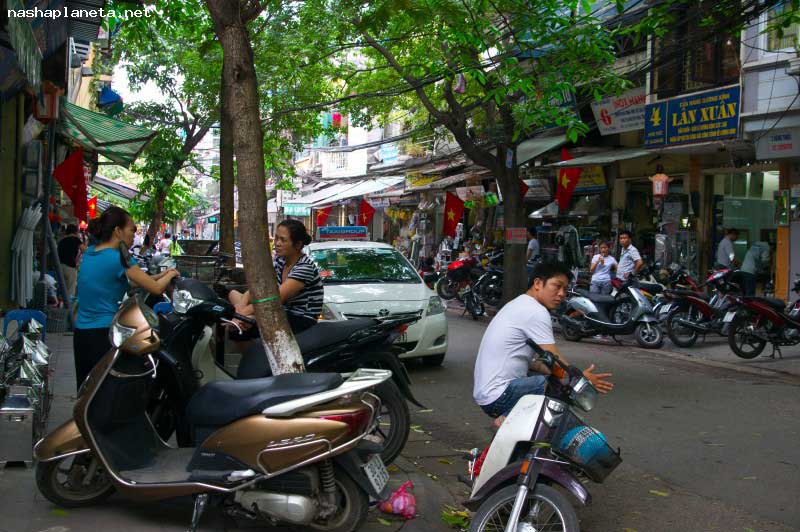 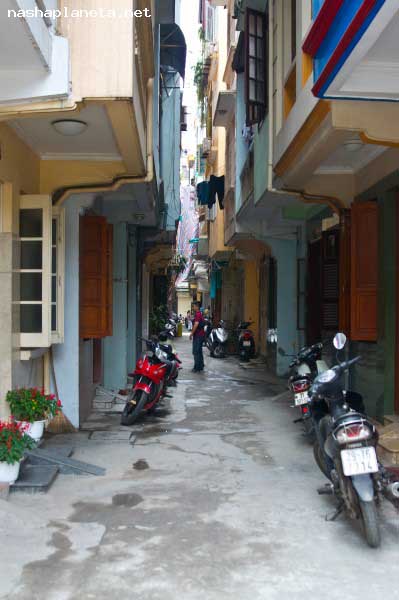 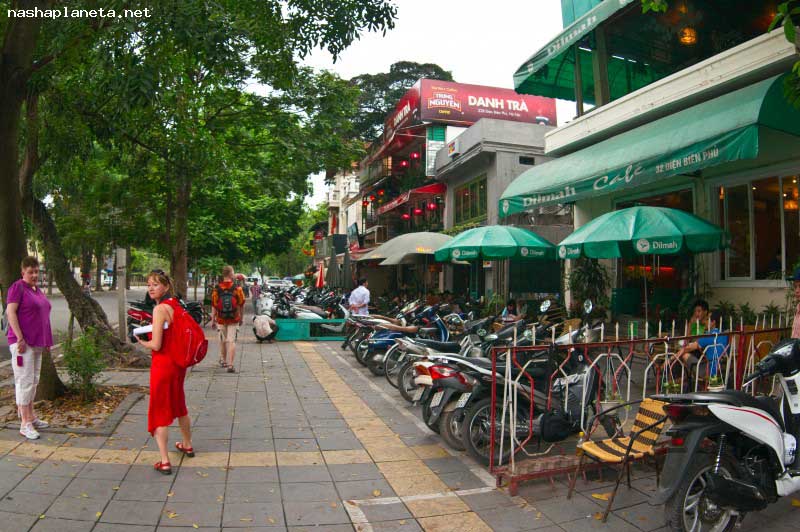 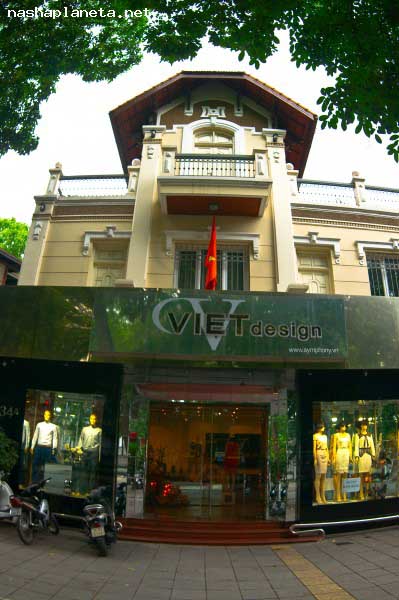 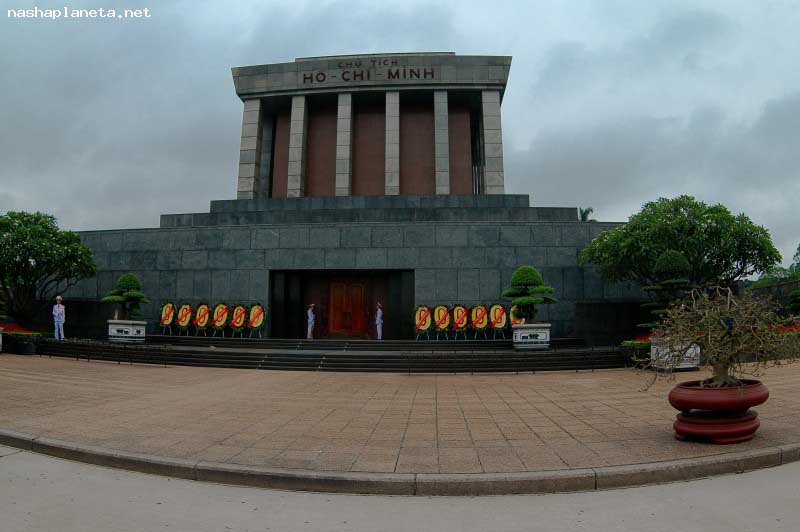 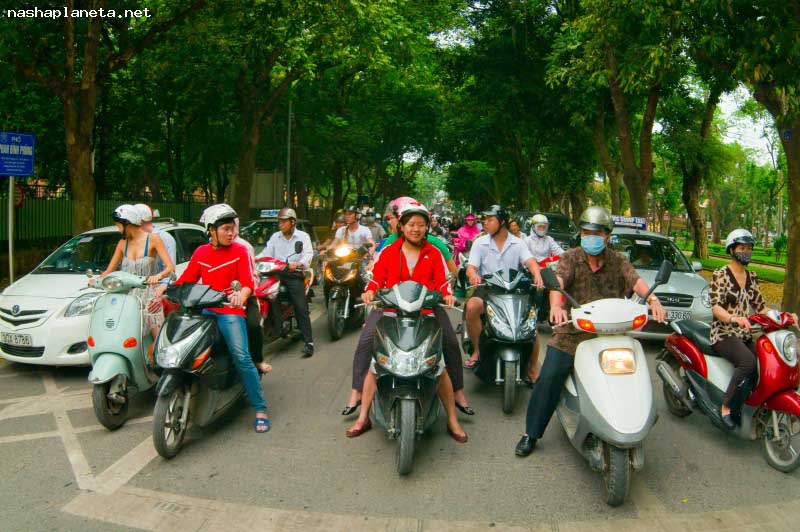 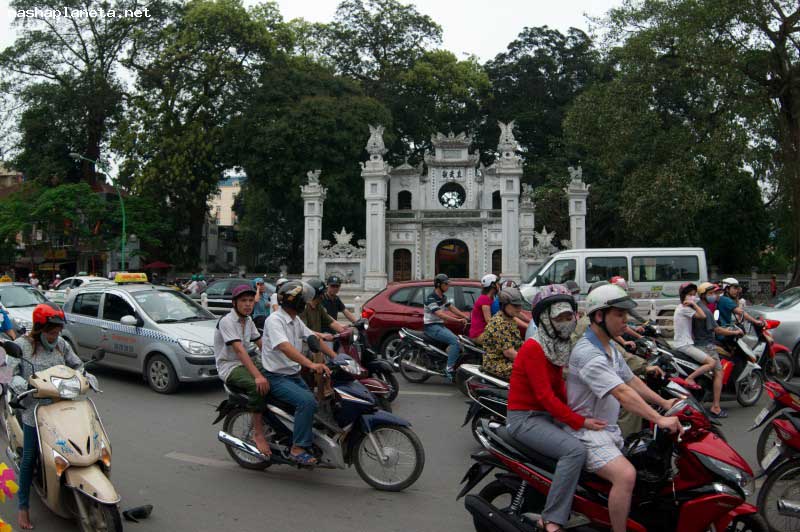 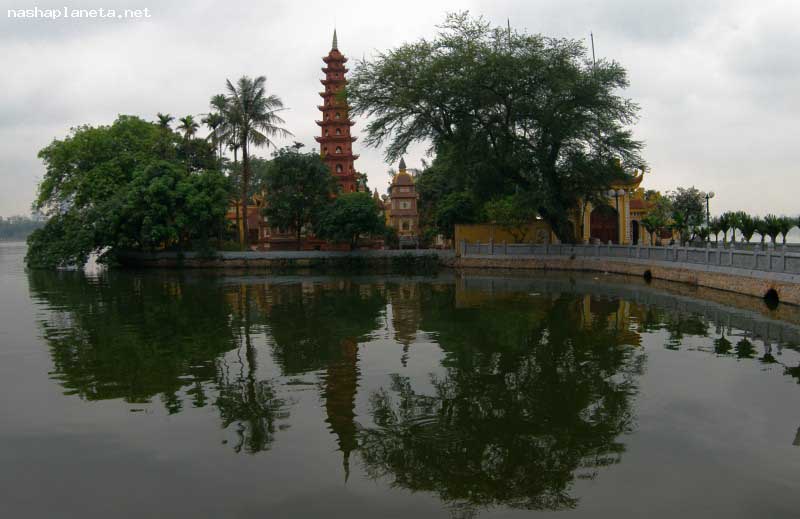 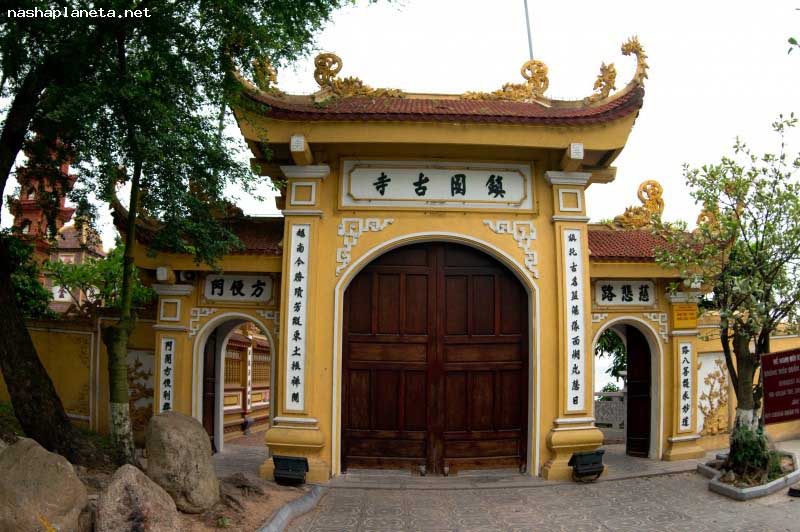 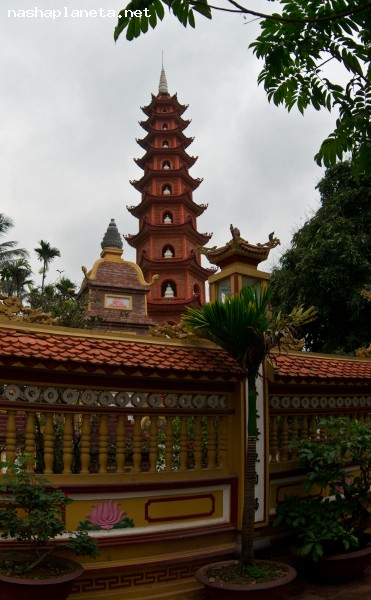 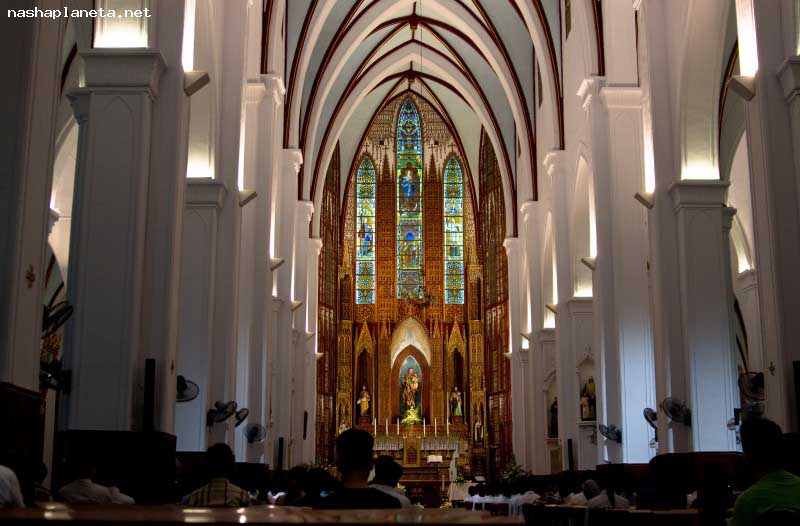 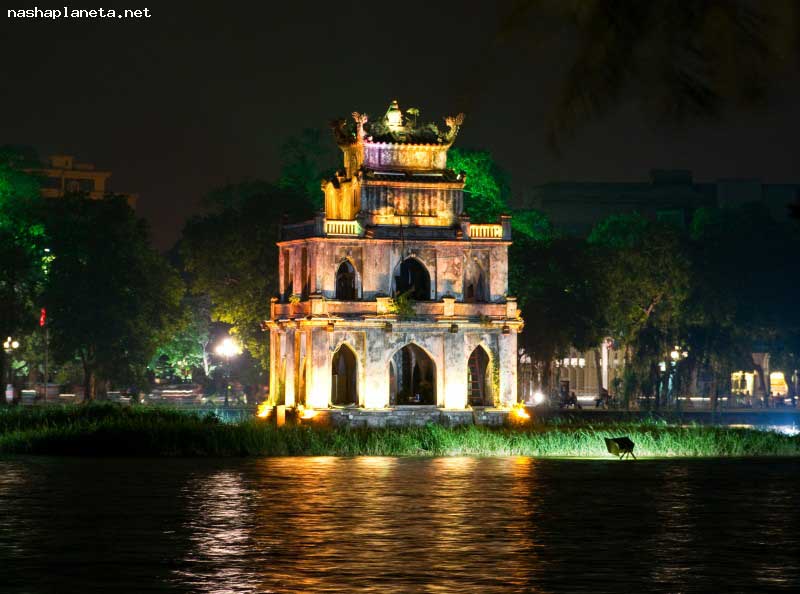 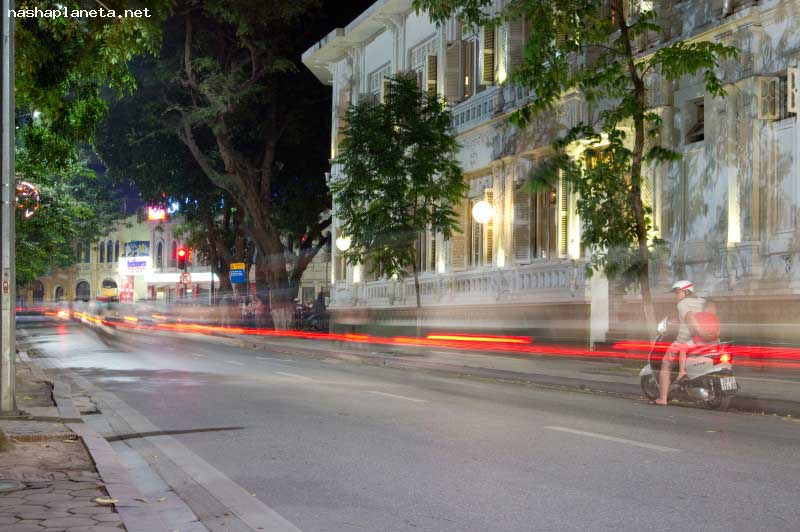 Comments / recent posts on the topic on the forum
Re: Hanoi-hue-Hoi an-Ho Chi Minh city in April 2013,Eugene May 21, 2013
What gives such a "crafty" card for Gibraltar, if not a secret?
In go better with MTS, tested, works everywhere, at least from those countries where I was. Any applications and deposits by a certain amount is required. The problem was only in Mexico, none of the phones with the SIM card MTS didn't want to be friends with the local operators. The issue resolved after a letter in the MTS, or rather two, as at first they were surprised and answered that they have an agreement with the Mexican operator, I do not remember his name, and everything should work like a problem in my phone. But I have had several phones and none of them MTS to local operators is not hooked up, but English SIM cards T-Mobile connect to the network without any problems.
After the second letter in the MTS that describes the problem, something they apparently decided to find out. It turned out that MTS just forgot to extend the contract with the Mexican operator. In the end, after a week of MTS earned. ...
Re: Hanoi-hue-Hoi an-Ho Chi Minh city in April 2013admin May 21, 2013

Nothing, actually, just one of my earnings is to work remotely via the Internet, and I receive payment therefore, the other is not possible. And this card is convenient to pay because it is a dollar and conversion is directly and not by some sweeping ways of rubles into dollars and then into the national currency. And besides, no fee when paying at POS terminals, and when removing the cash Commission is charged. I pay her house everywhere in all the shops (or rather the wife with her shopping for groceries, etc.), never at home still not there for more than half a year of use, except that our vigilant sometimes sellers wife denied her admission because the card is not her (the name on the map clearly indicate gender). ...
Re: Hanoi-hue-Hoi an-Ho Chi Minh city in April 2013,Eugene May 21, 2013
Understandable, but still better to pay abroad some other map, with the ability to receive SMS notifications of withdrawal of money. ...
Re: Hanoi-hue-Hoi an-Ho Chi Minh city in April 2013admin 31 May, 2013
About write-off in the supermarket $ 15 in Ho Chi Minh city (see above) added that until the promise has in store return never happened, even though it's been three weeks. A few days ago, I wrote to my Bank about this tranzactii, promised to contact the Bank. ...
Re: Hanoi-hue-Hoi an-Ho Chi Minh city in April 2013Eugene 31 May, 2013

I'm not even surprised. Most likely a Vietnamese Bank was not going to return anything, and the store, too.
In their homespun logic You're a tourist (of course not just You), that is, the object for Nai... sorry cheating. Left and went to his North, soon following a fool...., sorry tourist will come.
Well this is Vietnam, is among Vietnamese decent people of course, but it carries with it the gene - "lie to farang" because farang to exist, as, for example, the chicken exists in order to lay eggs.
When I tried to inflate in Vietnam, selling for example instead of tea dust from Vietnamese roads, as they love to do, I always tell them that I am not a tourist, I live in Nha Trang, and if they will sell me the Boo, then I'm all tourists will say that you have a bad store, but if the tea is good, I will advertise all Russian your smelly shop. Sometimes helped. The trouble is that they are wild there, most do not understand guys either in English or in Russian. ...
Re: Hanoi-hue-Hoi an-Ho Chi Minh city in April 2013admin 2 June, 2013

That is the same about solid Nai... My Bank finally returned the money today. Helped a Fax I received in the store from Vietcombank. Just wonder how they even Fax'd done nothing to return not going. In Vietnam every step necessary to keep your eyes open. But if you think that you were not pinned, so just still don't know what you got ;) . ...
Re: Hanoi-hue-Hoi an-Ho Chi Minh city in April 2013,Eugene 2 June, 2013
Alas, Yes, it is, though so , to be honest, maybe this is the beauty of this country. :DOWN :suicide
My friend is now in Nha Trang, today already three times called and asked what to do - paid for pictures - deducted 3 times from the card - then said that the payment failed and he is still a cache paid. Called and asked his office to check, there is a delusion - the purchase of one and the same for $ 385, and write-offs of as many as four, but the last undone for some reason.
It is very bad English and Vietnam, I advised him, now already is not convenient somehow.... ...
Re: Hanoi-hue-Hoi an-Ho Chi Minh city in April 2013muzzle Sep 25, 2013

Report: Moscow - Los Angeles - 11500 Tr Direct flight, give a "Shemale"!!!
Moscow - new York is almost the same. Departures and returns on Saturdays. In November and December. For example, from 30 November to 14 December. Tickets are only visible on the aggregators. Expedia and Skyscanner!.... ...
Re: Hanoi-hue-Hoi an-Ho Chi Minh city in April 2013admin 25 September, 2013