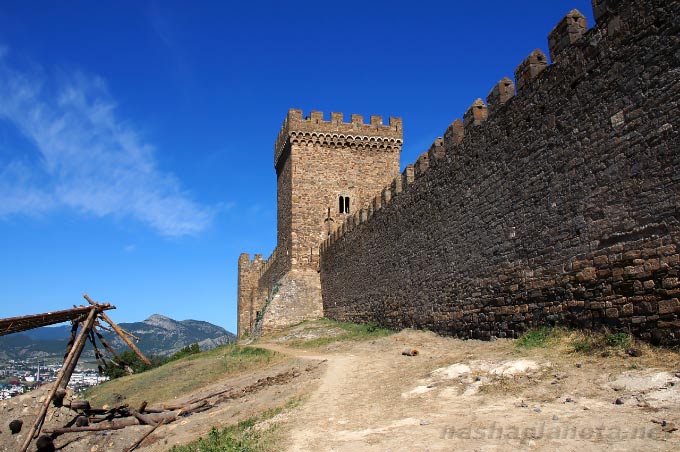 View of the castle

The Genoese fortress of Sudak is the main attraction of Sudak and one of the most interesting historic buildings in Eastern part of the Crimea.

A modern fortress was built by the Genoese in the period from 1371 to 1469 years, however, the initial fortifications on this place appeared much earlier: scientists have found that from the mid 7th century there was a fortified Byzantine town Sugdeya of economic, trade and political center of the region. There is also an unofficial version that was originally a defensive structure on this location was built in the year 212 Alans, evidence which has not yet been found, but only mentioned in the legends. During the period of its existence, the citadel repeatedly passed from one hand to another, sometimes bloody battles, and at times completely without a fight. About the eventful history of this monument, you can learn during a guided tour of the fortress. 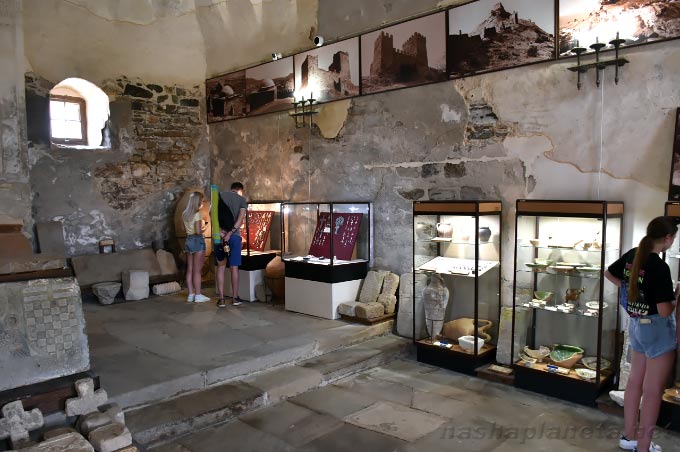 The Museum in the fortress

The main part of the extant objects appeared in the period of the presence of the Genoese (1365-1475). It's defensive walls, towers Patrol (Maiden) and Astaware (Port), Consul's castle, mosque (built later during the reign of the Horde), the temples of the Twelve apostles and the Catholic Cathedral of the virgin Mary, the remains of urban development, coastal strengthening VI. and the like.

Today the territory of the city-fortress is open to tourists as a Museum under the open sky. Compared to the fortress Kafa in Feodosia, the Genoese fortress of Sudak preserved and restored much better, respectively, and to visit her much more interesting. Besides, at a certain time, you can join a group with a tour service that is much more interesting than self-examination. Also on site you can visit the numismatic Museum (entrance 50 rubles, a tour service included), which is under the earth; historical Museum (admission is free); Museum "of torture instruments" (temporary does not work). Also at the Museum you can practice archery for an additional fee. Before entering the Museum you will find a small market of souvenir shops and cafes. At the entrance offer to take pictures with the costumed actor for the money.

When you visit it is worth remembering that the entrance to bathing suits and bare chested, with animals, is prohibited. Smoke on the territory of the fortress is strictly prohibited.

🚶 How to reach: the fortress is located approximately one mile from the center (from the Cypress alley), and reach it on foot (the entrance to the fortress on the map). Can also be reached by bus No. 2 and bus in the village of Novy Svet 9 rubles. The stop is called S. Cozy, but is declared in the transport as "the fortress"

Photo of the fortress of Sudak

Comments / recent posts on the topic on the forum
Re: Sudak, Novy Svet and the surrounding areaAnatolii 5 April, 2017

Come join us at the pike in may. Weather must be installed on may will work. ...
Re: Sudak, Novy Svet and the surrounding areaOlga2 6 July, 2017
Tell me, please, if you go to the Sentry-Both on route 1 to the peak the Space from the New world, how long will it take the path in one direction (going to return the same way). ...
Re: Sudak, Novy Svet and the surrounding areaadmin 6 July, 2017

Hello Olga! We've done way children 5 and 7 years!!! on route 2 one-way, sat on the beach in a Fun, climbed up to the ruins of the fortress, and went back to the split in the route 2 and route 1 through the valley of Paradise and the peak of the space, but at the very top of the Guard Both climbed. For everything from car Parking next to the winery and back to her took no more than 6 hours. And it's with children, which in places had almost to pull. So all other hands, even if you go with a truce and continually admire the beauty will take no more than 8 hours. ...
Re: Sudak, Novy Svet and the surrounding areaAnna BR December 15, 2017
I'm so sorry that wasted your time and money on a New Light. We are in Yalta rested for the same money, but much cooler. Golitsin's path is inferior to Solar and especially Botkin. The beach smells really bad. Stayed at Vintage hotel, nice hotel, can not say anything, and the place is not very. In Yalta, stayed in SPA hotel Livadiysky, for the same money, delicious Breakfast, fall asleep to the sound of the surf, the price includes SPA. Walk to the Waterfront to take a 15 minute drive and there life is in full swing, and the concert hall are always some activities on the Waterfront. Don't waste time and money in the trash. Good luck to everyone! ...
Re: Sudak, Novy Svet and the surrounding areaadmin 15 December, 2017

Hello Anna! You should not compare these two resorts, they just stay different. That's why you have to read the descriptions as we have on the website, not to be mistaken with a choice before the trip. You just probably wanted a more cheerful and noisy sports, lots of entertainment, as in Yalta. And New Light as the village. There's just a very different kind of holiday, around the quiet, beauty and fresh air. ...
Re: Sudak, Novy Svet and the surrounding areaMardis 19 December, 2017
A long time was neither here nor there. But the walleye love for more correct to say - movement. And New Light and pike beautiful visually, but in a New Light this beauty hides nothing, neither the crowd nor the house nor the street. For me the best is to leave the children with grandma in Sudak when you want silence, and to guide the foot in the direction of the New world - 2 hours only. Next summer will be there, already paid for the apartment on the website-Twill - look forward to Hiking with his wife. And, Yes, my children only sand, so the choice is obvious, without a Perch to rest not glued :roll: ...
Re: Sudak, Novy Svet and the surrounding areaVasilis 9 Feb, 2018

Yalta and the New world - the resorts are very different. In Yalta action, a lot of people and bustle. We had a rest in Alushta and Yalta, trains and other places, but nothing like a New Light for yourself is not found. In General, this resort is more expensive than similar hotels in other areas of the South coast, but it's worth it. Ranging from beauty Bay and mozzevelovaya groves and ending source of fresh air - everything is unique. We at night always turned off the air conditioning and opened the Windows to breathe this healing air. Yes, a quiet, calm environment without noise of discos at night, very conducive to family recreation. And the daily walk before Breakfast along the trail Golitsyn diving from the cliffs - unforgettable. Bay with a gently sloping bottom and a gradual decrease of depth very convenient for bathing with children. Best places for a family holiday we don't know. For August already booked a hotel in a New Light. Stay there not for the first time. Very happy, though not without shortcomings of course. Looked Vintage, it is more expensive, but the area we liked the smaller. And in the New Light, the rooms that are already renovated to a very high level. repair and and furniture, and the service too. We like. ...
Re: Sudak, Novy Svet and the surrounding areaYamaru March 7, 2018
we did not stay there. in Yalta we go ...
Re: Sudak, Novy Svet and the surrounding areaEridan7700 11 March, 2018
I really like the perch. The first time was 15 years ago, was in the past 2017, and this food, always in may. Always stay in the current the pike perch, booking a room in advance, powered with custom menu in the restaurant silk road. Fly to Simferopol, and from there a taxi transfer to Sudak, 2000R. ...
Re: Sudak, Novy Svet and surrounding areaRoad man June 27, 2018
Questionable fun, concerts, second-rate pop foursikov the crowd of onlookers - we need those who in his city or village with this tight.
And after the big cities, especially such as Moscow - the peace and quietness of the villages of the New type Light or foros is what we need!
Although in the same nanosecond cafes-restaurants-hotels many times more than in the above foros. ...
To reply or discuss the topic on the forum
CONNECT
⌃
✖Календарь недорогих авиабилетов