Tourist information about the New world in the Crimea

New world in the Crimea – the settlement of urban type and suburb Perch. Administratively belongs to the Large perch, located on the black sea coast in the South-Eastern part of the Crimean Peninsula in five kilometers from the center of Sudak (New world on the map of the Crimea). This is a very tiny village with a population of slightly more than a thousand people, and its area is only slightly greater than one square kilometer. From the South hidden by a ridge of the Crimean mountains, access to the sea submitted by the shores of picturesque bays, delineated rocky headlands. The surrounding area are a nature reserve. Thanks to all this New world is famous as one of the most comfortable places to stay in the Crimea, just idyllic for those who wish to enjoy a peaceful beach holiday in a quiet and very picturesque place.

The resort town until 1912 called Paradise (Paradise), became well known outside of Crimea, attracting tourists not only beach holiday in a mild climate, but also some of historical and natural attractions.

The Central beach in a New Light is positioned as the only civilized place to stay with infrastructure developments. It occupies a stretch of coastline of Green Bay in length 500-600 meters. The width of the beach about fifty meters, covering a diverse. Scattering of large and small pebbles interspersed with sandy islets. Here the fans of sunbathing can rent tourist equipment, water attractions, cafe and other services that ensure a relaxing stay. In addition to the main beach, popular for privacy are wild landlocked in the Robber, Crab and Turtle Bay. We should also mention the famous king's beach: the place is incredibly beautiful and forbidden, but nonetheless crowded. 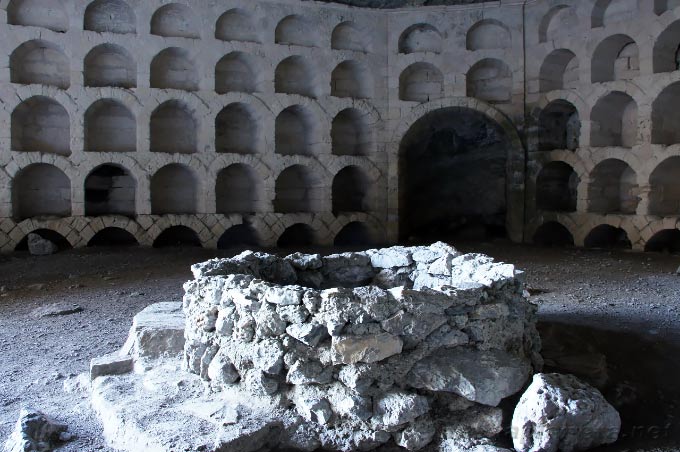 Many guests are attracted to the village sights of the New world: Golitsyn (when you walk on it, tourists get acquainted with several attractions such as the grotto of Chaliapin, Cape Kapchik, through grotto, etc.), two estate of Golitsyn and the factory of sparkling and fine wines "New world". Guided visits of tourists come to the New world from the nearby cities of Sudak, Alushta, Feodosia. Vacationers enjoy visiting the tasting rooms of the existing plant of sparkling wines. Take part in Hiking to the ruins of the cave monastery and Kotlasskoe fortress – defensive buildings of the Bosporan Kingdom. Every visitor just has to swim on the Royal beach, sit in the shade of relict trees, juniper trees, enjoy the sea views with a quaint Cape Kapchik and to look into the mysterious darkness through grotto, fantasizing about pirate treasure. The surrounding area abound with Hiking trails, on which you can climb one of the peaks. In the village there is a diving club "Katran", where you can learn beginners to dive professionals.

The tourism industry in a New Light, we can say, is in its infancy. There are no large hotel complexes and shopping centers. Because of this, the prices here are quite high, there is a shortage of cheap accommodation. The rest of the infrastructure is quite developed: there are cafes and restaurants, cheap dining room (one of the most famous legendary dining USSR), for lovers of dance disco-bar "octopus", a travel Agency and tour sales. Along the shore is a cozy promenade, where during the day you can walk with the kids and take them for a ride on a rented child car, and in the evening to dine in the restaurant overlooking the sea or dance at the disco.

Like most of resorts of Crimea, high beach season in a New Light lasts from July to September. While swimming and sunbathing is possible at the end of may until the beginning of October, but to a comfortable temperature of the sea warms up towards the end of June. Come to the New world in the winter makes no sense.

Seasons in a New Light months, when is the best time to go

Helpful information about the New world 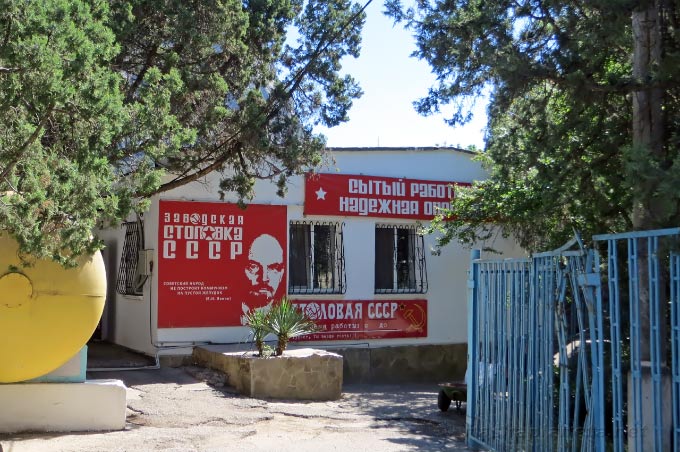 Dining room of the Soviet Union

Fun for the kids. For children in the New world are not really a lot of work but you can go to the water Park in Sudak and on the waterfront there is a rental of bicycles and children's cars.

To eat in a New Light. Cheap to eat in the dining room of the famous "USSR".

The bus from Walleye. The local bus from the pike Perch it is best to go with the ultimate (bus station of Sudak), otherwise it will not fit on the bus.

Champagne "Novy Svet". At the local company store at the factory "New world" sold by the original champagne. The prices are the cheapest in comparison with the rest of the Crimea, so you can safely buy it.

Comments / recent posts on the topic on the forum
Re: Sudak, Novy Svet and the surrounding areaAnatolii 5 April, 2017

Come join us at the pike in may. Weather must be installed on may will work. ...
Re: Sudak, Novy Svet and the surrounding areaOlga2 6 July, 2017
Tell me, please, if you go to the Sentry-Both on route 1 to the peak the Space from the New world, how long will it take the path in one direction (going to return the same way). ...
Re: Sudak, Novy Svet and the surrounding areaadmin 6 July, 2017

Hello Olga! We've done way children 5 and 7 years!!! on route 2 one-way, sat on the beach in a Fun, climbed up to the ruins of the fortress, and went back to the split in the route 2 and route 1 through the valley of Paradise and the peak of the space, but at the very top of the Guard Both climbed. For everything from car Parking next to the winery and back to her took no more than 6 hours. And it's with children, which in places had almost to pull. So all other hands, even if you go with a truce and continually admire the beauty will take no more than 8 hours. ...
Re: Sudak, Novy Svet and the surrounding areaAnna BR December 15, 2017
I'm so sorry that wasted your time and money on a New Light. We are in Yalta rested for the same money, but much cooler. Golitsin's path is inferior to Solar and especially Botkin. The beach smells really bad. Stayed at Vintage hotel, nice hotel, can not say anything, and the place is not very. In Yalta, stayed in SPA hotel Livadiysky, for the same money, delicious Breakfast, fall asleep to the sound of the surf, the price includes SPA. Walk to the Waterfront to take a 15 minute drive and there life is in full swing, and the concert hall are always some activities on the Waterfront. Don't waste time and money in the trash. Good luck to everyone! ...
Re: Sudak, Novy Svet and the surrounding areaadmin 15 December, 2017

Hello Anna! You should not compare these two resorts, they just stay different. That's why you have to read the descriptions as we have on the website, not to be mistaken with a choice before the trip. You just probably wanted a more cheerful and noisy sports, lots of entertainment, as in Yalta. And New Light as the village. There's just a very different kind of holiday, around the quiet, beauty and fresh air. ...
Re: Sudak, Novy Svet and the surrounding areaMardis 19 December, 2017
A long time was neither here nor there. But the walleye love for more correct to say - movement. And New Light and pike beautiful visually, but in a New Light this beauty hides nothing, neither the crowd nor the house nor the street. For me the best is to leave the children with grandma in Sudak when you want silence, and to guide the foot in the direction of the New world - 2 hours only. Next summer will be there, already paid for the apartment on the website-Twill - look forward to Hiking with his wife. And, Yes, my children only sand, so the choice is obvious, without a Perch to rest not glued :roll: ...
Re: Sudak, Novy Svet and the surrounding areaVasilis 9 Feb, 2018

Yalta and the New world - the resorts are very different. In Yalta action, a lot of people and bustle. We had a rest in Alushta and Yalta, trains and other places, but nothing like a New Light for yourself is not found. In General, this resort is more expensive than similar hotels in other areas of the South coast, but it's worth it. Ranging from beauty Bay and mozzevelovaya groves and ending source of fresh air - everything is unique. We at night always turned off the air conditioning and opened the Windows to breathe this healing air. Yes, a quiet, calm environment without noise of discos at night, very conducive to family recreation. And the daily walk before Breakfast along the trail Golitsyn diving from the cliffs - unforgettable. Bay with a gently sloping bottom and a gradual decrease of depth very convenient for bathing with children. Best places for a family holiday we don't know. For August already booked a hotel in a New Light. Stay there not for the first time. Very happy, though not without shortcomings of course. Looked Vintage, it is more expensive, but the area we liked the smaller. And in the New Light, the rooms that are already renovated to a very high level. repair and and furniture, and the service too. We like. ...
Re: Sudak, Novy Svet and the surrounding areaYamaru March 7, 2018
we did not stay there. in Yalta we go ...
Re: Sudak, Novy Svet and the surrounding areaEridan7700 11 March, 2018
I really like the perch. The first time was 15 years ago, was in the past 2017, and this food, always in may. Always stay in the current the pike perch, booking a room in advance, powered with custom menu in the restaurant silk road. Fly to Simferopol, and from there a taxi transfer to Sudak, 2000R. ...
Re: Sudak, Novy Svet and surrounding areaRoad man June 27, 2018
Questionable fun, concerts, second-rate pop foursikov the crowd of onlookers - we need those who in his city or village with this tight.
And after the big cities, especially such as Moscow - the peace and quietness of the villages of the New type Light or foros is what we need!
Although in the same nanosecond cafes-restaurants-hotels many times more than in the above foros. ...
To reply or discuss the topic on the forum
POPULAR TICKETS
Sochi(Adler)2 970₽Crimeafrom 4 195₽SpB2 998₽Kazan2 190₽N. Novgorod5 569₽Samara3 570₽NvSB5 445₽EKBfrom 4800₽VL-K20 948₽Londonfrom 2 740₽York20 280₽Barcelona5 398₽Beijingfrom 17 560₽Paris7 432₽Romefrom 3 755₽Top 100 tickets out of your airport here
⌃
✖Календарь недорогих авиабилетов