Mountain Echki-Dag in the village of Spa in Crimea 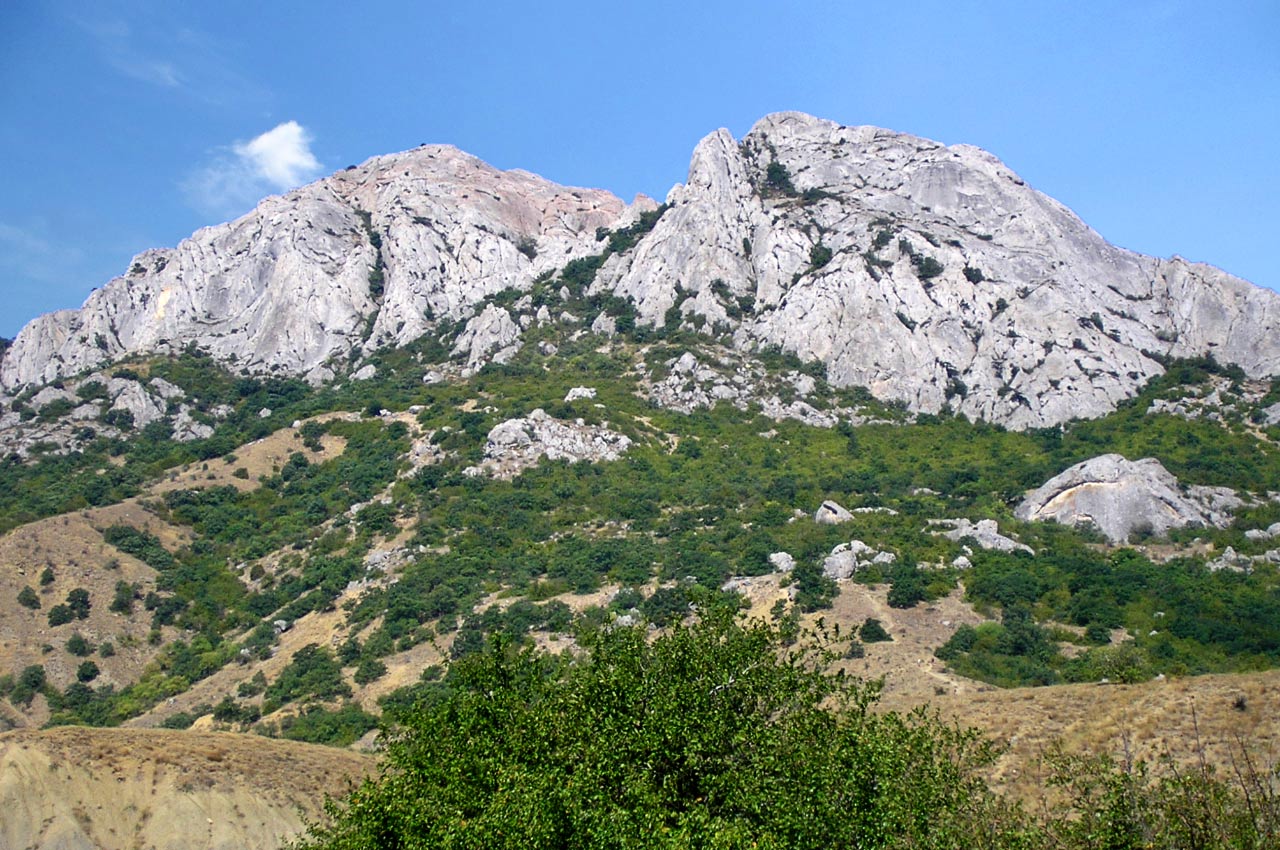 Mountain range Echki-Dag is located in the Eastern part of the Crimean mountains, the Black sea coast near the village of Spa in the big Feodosia. A part of the surroundings in this area is closed to visit the territory of the reserve, but this site is open to tourist routes.

Translated from the Crimean Tatar Echki-Dag means "mountain Goat". A generic name of three mountain peaks, stretching for 3 km between Shchebetovka and Sun valley. The North peak is called the K. O. Kush-Kaya, is a triangular rocky peak. The Eastern peak of Echki-Dag overgrown with forest. And in the South from the top of the Chal-Kai - the highest point of the ridge, which rises to 670 m above sea level. M. peaks With breathtaking views of the surrounding area: a clear view of the Resort village, Kara-Dag, Cape Meganom, etc.

The whole mountain range was in ancient times the bottom of the sea and consists of lime, like a layer cake. The entire surface of the mountains are cut by many ravines and beams, heaps of stones and caves. One of the most famous caves is a karst fissure Ear of the Earth. According to legend, it has no bottom and leads to the center of the earth. But the cavers who explored the cave, saying that her depth of 132 m. It is very narrow and winding. And the descent into it without special equipment and training is prohibited.

Another attraction is the quirky pine-curved "Wing glider", which is the natural outgrowth, called the "Royal throne". Also on the slopes are several sources (springs).

The flora and fauna of these places is very meager, but unique. Mostly the vegetation consists of oak fluffy, hawthorn, dogwood, ash. On the Northern slopes of native species of wild orchids. And on the southern slopes you can still see Koktebel Tulip, are not found anywhere else on earth.

This territory was anciently inhabited, as evidenced by numerous archaeological finds. Discovered and investigated dozens of unique monuments of the Mesolithic and Neolithic, and bronze age settlements. Just as only in the area for more than 150 archaeological monuments of different eras. At the foot of the Echki-Dag is conveniently located Fox Bay is a popular recreation area and beach "savages" and "nudists".

To Echki-Dag can be reached by any road or sea from Feodosia, Koktebel or Sudak, on foot from the village Resort. But to storm the area will have to walk. For visitors designed several Hiking trails of varying difficulty that will please both novices and experienced hikers and mountain climbers, storming the rocky peaks.

In any case, you should wear comfortable athletic shoes and wear long pants because the mountain slopes are overgrown with thorny bushes and plants that are able to dissect the skin. At the foot of the mountain, you should stock up on water in the spring and provisions. Note that the minimum travel time is about 7 hours. To go to a way better group with an instructor, in order not to go astray.

🕐 Time of work: round the clock, visit better day

🚶 How to get: Echki-Dag is located in two kilometers to the West of the village of Kurortnoye (Echki-Dag on the map). It is best to visit as part of guided tours with experienced guides who will take you on the trails and show and tell about interesting places. Typically, these trips take a full day. You can visit Echki-Dag and the self that does not require special training, but should be forces for the UPS and the downs and to learn the routes.

From the Resort or beach Fox Bay is easy to reach on foot. Also self get here from Feodosia and Koktebel on a commuter bus 101 (price - 24 rubles, see transport Feodosiya). Ask the driver to drop you at the turn in the Fox Bay.

PPC still works and Park on site Parking, fine. Although you can pass other paths bypassing the checkpoint, I wouldn't, because the Rangers or I don't know how they go Commission, photographed the vehicles and issue fines, then send in the mail. But at the checkpoint are allowed to drive to camp on the beach for unloading/loading, and then return and leave the car near the checkpoint in the Parking lot. ...
Re: Theodosia and the surrounding areaFinn 6 July, 2017
They is there a law that took that car closer than a hundred meters from the sea impossible. ...
Re: Feodosia and surroundingsYuri 10 July, 2017
The trail along the Kara-Dag is not 300 rubles, and 600, and it is not the reserve has been... ...
To reply or discuss the topic on the forum
POPULAR TICKETS
Sochi(Adler)3 570₽Crimea5 244₽SpB2 790₽Kazanfrom 2 339₽N. Novgorod4 140₽Samara3 970₽NvSB8 211₽EKB4 398₽VL-K20 953₽London3 241₽Yorkfrom 19 190₽Barcelona6 009₽Beijingfrom 17 946₽Paris7 120₽Rome5 890₽Top 100 tickets out of your airport here
⌃
✖Календарь недорогих авиабилетов