The Beaches Of Feodosia

Theodosia is a beach resort with good beaches. Unlike most other places on the South coast of the Crimea, is basically sand and not pebbles. Another plus is their relative not crowded. Even in high season here don't have to jostle elbows with their neighbors along the coast, to pave the way to the water. But it should take into account the characteristics of the local beaches, especially if you are picky about quality, purity and beauty.

In the center of Feodosia is located a long pebbly town beach, also called "Stones". He is the most developed and crowded, there is also a promenade and pedestrian area, and almost the entire tourist infrastructure. Stretch on mixed sand-shingle beaches, but seasoned beachgoers they can lead to a real depression. There are no continuous coastal strip, and every 150 meters of the shore is interrupted by concrete breakwaters and fences. Moreover, some areas are blocked by fences and buildings to limit access of tourists (this echoes the pay beaches in the leadership here of the Ukrainian authorities), and although to get right now there overcome barriers, unpleasant aftertaste remains. On the joints of sites found impassable mud or concrete blocks, and in places the water is only dangerous due to protruding rebar and concrete and stones.

If we move even further North begin the sandy beaches. At first they, too, break every 150 metres by concrete breakwaters, but outside the city begins a continuous ten-mile strip of wonderful "Golden beach", but also has its disadvantages, among which runs along the coast road and the almost complete lack of infrastructure. 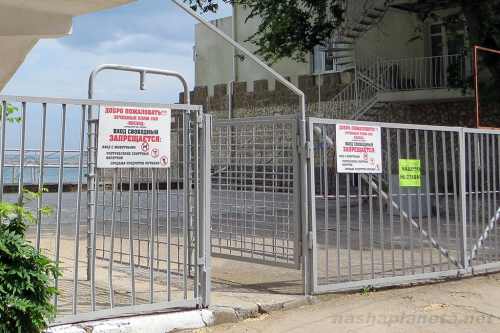 Welcome to the beach
admission is free

And yet, all the beaches of Feodosia free. Charge for entrance to the beach according to the law of the Russian Federation – is illegal!

Useful information about the beaches of Feodosia:

Summing up, I want to give recommendations on the choice of the beach and places to stay. If you want to relax on an extended probation and a beautiful sandy beach to enjoy long evening walks along the surf, and for that you're willing to sacrifice amenities and infrastructure, then it is best to get outside the city on the "Golden beach" or on the outskirts.

If entertainment is important for you, it is best to go into the center because there's plenty to entertain, and there's a waterfront promenade, and the beach is long, well maintained and safe, but pebbly and very crowded.

Well, the rest of the city... where to drag the chain short "beaches" separated with concrete, piles of debris and fenced rusty fences... We just don't find reasons to recommend that you stop there, is that if there will come across a very cheap hotel or you will get a ticket to one of the resorts.

Read more detailed description of each of the beaches of Feodosia with photos starting from the center to the North, so you can choose the places for a hotel or accommodation:

Some Internet sources describe each 150-metre section of the coast, separated by breakwaters, in the form of a private beach. We deliberately omit such a detailed description, grouping them into areas for a detailed description of you can only to confuse. For choice of places to stay you will have a General understanding of each area.

The beaches of Feodosiya on the map

PPC still works and Park on site Parking, fine. Although you can pass other paths bypassing the checkpoint, I wouldn't, because the Rangers or I don't know how they go Commission, photographed the vehicles and issue fines, then send in the mail. But at the checkpoint are allowed to drive to camp on the beach for unloading/loading, and then return and leave the car near the checkpoint in the Parking lot. ...
Re: Theodosia and the surrounding areaFinn 6 July, 2017
They is there a law that took that car closer than a hundred meters from the sea impossible. ...
Re: Feodosia and surroundingsYuri 10 July, 2017
The trail along the Kara-Dag is not 300 rubles, and 600, and it is not the reserve has been... ...
To reply or discuss the topic on the forum
CONNECT
⌃
✖Календарь недорогих авиабилетов