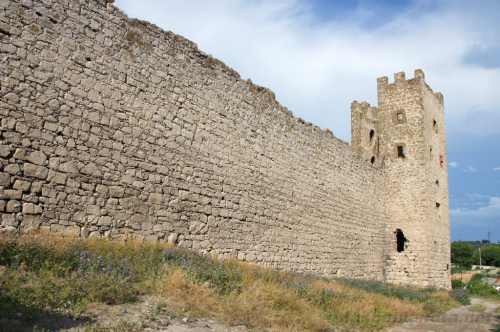 Feodosiya's Genoese fortress – a monument of ancient history and the slave trade of the black sea. This is the most famous and interesting historical landmark, Feodosia. One of its towers is the tower of Constantine, is the city's symbol and is depicted on its coat of arms.

Genoese fortress Kafa is one of the most powerful fortifications in Europe. His design consisted of two walls, which protected almost 70 hectares of land. In the architecture of Feodosia from antiquity have not survived absolutely nothing, as she fell from the invasion of the Huns in the IV century.

The ruins in XIII-XIV centuries there was a city Cafe, which was 200 years in the possession of the Genoese. Fortifications, remains of which have survived, built in the Italian style. Allowed to build a city that Genoese merchants succeeded in 1226 to negotiate the ruins of the Oran-Timur – Turkish Khan. Cafe has quickly become a major transit centre for trade and the center of the colonies of Genoa in the black sea. Using this item has been export to Europe wheat, Oriental spices, precious stones and gold. Kafa was also a center of slave trade in the black sea region, as in the time of the Genoese, and during the later Turkish occupation. The population of the city amounted to many ethnic groups: Greeks, Armenians, Italians, Bulgarians, Jews, Ukrainians, Tatars, Karaites.

In the Cafe, there were close to 20 million homes, more than 100 mosques and churches, fountains, had a system of drainage wells, caves and pools, the remains of which are discovering even now. The administrative center was located in the inner part of the fortifications.

One of the most tragic events in the history of medieval Europe – the plague epidemic of 1347-1351 was caused by Kafa. During her siege of the Golden Horde among the troops plague broke out, they began to shift to catapult the bodies through the walls of the city. The Genoese fled from the sickness of the sea, but wherever they stopped on the way, there were foci of plague. The result is a terrible disease claimed a quarter of Europe's population in that period, about 75 million people.

Today, the fortress in Feodosia there is not too much, since a large part of the ancient fortifications of the city were dismantled for building material in the nineteenth century local residents. Walking around the neighborhoods nearby can see private fences and houses built of ancient masonry. In good condition till our days are the ruins of two towers of the bridge, several churches and Turkish baths. Preserved objects are scattered in the southern part of the city, and start from standing alone Tower of Constantine in Jubilee Park, and the main surviving part of the fortifications is located at the South-East of the city.

How to see: to See the fortress best guides which will tell in detail the story and draw attention to the most interesting part of the fortress. However, a group tour or excursion at the electric vehicle includes only the most basic remnants. If you want to see everything, including rarely visited by tourists, it is best to arm themselves with a map and walk the streets of the old town. A fee for access to any unit of the fortress do not charge. All the surviving monuments of the fortress is marked on our map of Feodosiya with the sights.

🕐 Time of work: round the clock, but see better in the daytime

🚶 How to get there: the monuments of the fortress scattered over the southern part of the city (marked on our map of Feodosiya with the sights). Access to the main ruins (the main ruins on the map) by bus No. 1 and 2A to the end "city hospital", further on foot.

Photo of the fortress of Feodosiya

PPC still works and Park on site Parking, fine. Although you can pass other paths bypassing the checkpoint, I wouldn't, because the Rangers or I don't know how they go Commission, photographed the vehicles and issue fines, then send in the mail. But at the checkpoint are allowed to drive to camp on the beach for unloading/loading, and then return and leave the car near the checkpoint in the Parking lot. ...
Re: Theodosia and the surrounding areaFinn 6 July, 2017
They is there a law that took that car closer than a hundred meters from the sea impossible. ...
Re: Feodosia and surroundingsYuri 10 July, 2017
The trail along the Kara-Dag is not 300 rubles, and 600, and it is not the reserve has been... ...
To reply or discuss the topic on the forum
POPULAR TICKETS
Sochi(Adler)3 159₽Crimeafrom 4 547₽SpB3 498₽Kazan3 380₽N. Novgorod6 210₽Samara3 970₽NvSB8 694₽EKB4 742₽VL-K20 666₽Londonfrom 2 759₽Yorkfrom 20 436₽Barcelonafrom 5 854₽Beijingfrom 19 306₽Paris7 805₽Rome6 237₽Top 100 tickets out of your airport here
⌃
✖Календарь недорогих авиабилетов