How and what to get to Evpatoria

Evpatoria is on the West coast of the Crimea, 65 kilometers from Simferopol and 57 kilometers from Simferopol airport (on the map). The capital city of the Peninsula joins the railway and frequent bus service. Tourists usually travel by plane via the airport of Simferopol, on a single ticket Railways train with a transfer on the bus and buses from other cities of Crimea and regions. Read more about all the ways to get to Evpatoria read more:

Infographics: How to get to Evpatoria

By plane to Yalta

Nearest to Yevpatoriya Simferopol international airport is 57 km away. It runs numerous daily flights from Moscow, St. Petersburg and regions of Russia. If your region of flights to Simferopol, you can find a convenient connecting flights via Moscow. Prices for flights for this area when purchasing tickets in advance is quite low and compete with the train.

To find flights to Simferopol airport for your dates, including a stopover, you can through the search form:

The minimum price of tickets from Moscow to Simferopol:

The minimum price of tickets from Russian cities to Simferopol:

How to get from the airport Simferopol Evpatoria

In Evpatoria on a single ticket Railways

During the tourist season (may to September) from the regions of Russia in Evpatoria inexpensive and comfortable can be reached by a single ticket Railways. Is a combined ticket train+bus. Routes generated with a minimum of delays to transplantation, and take passengers directly to Evpatoria at the bus station in the city centre (street International, 124). Transfer from the train to the bus is carried out in Krasnodar or Anapa. The price of a single ticket in the compartment from Moscow from 3500 rubles in one direction, which, in General, are not cheaper than the plane. You can purchase tickets in cash desks of the Russian Railways or on the website http://pass.rzd.ru/

In Evpatoria has a railway station, however, currently on the train, it is only accessible from the cities of the Crimea. Commuter trains connect the city with Simferopol (up to 5 flights a day) and Dzhankoy (1 flight per day). With a stopover in Simferopol you can get to Sevastopol, Kerch, Feodosia. Trains arrive in the city center/railway station Privokzalnaya square (railway station on the map). The fare from Simferopol - from 115 roubles.

In Evpatoria on the car 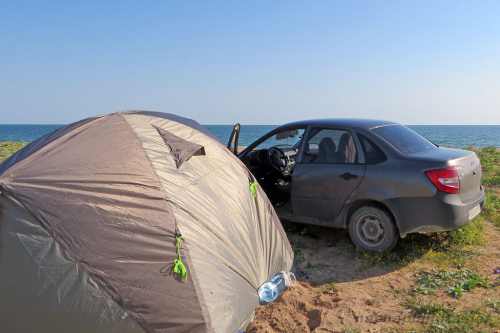 Traveling to the Crimea

If you go to Evpatoria by car, after crossing the bridge take the new road through Simferopol, the capital to circumnavigate the Peninsula by-pass road E105, and then in P25 through the airport to Yalta. This is the fastest and shortest route, it will take 4 to 8 hours depending on the workload of the route. The main traffic on this route can meet in Simferopol.

If you prefer a longer, more interesting route, after Theodosius can't go to Simferopol, and along the coast via Sudak and Alushta, and then through Yalta and Sevastopol. But it is much slower mountain road, and overcoming it will take at least 14 hours, even if you drive without stopping.

To Yevpatoria by Bus 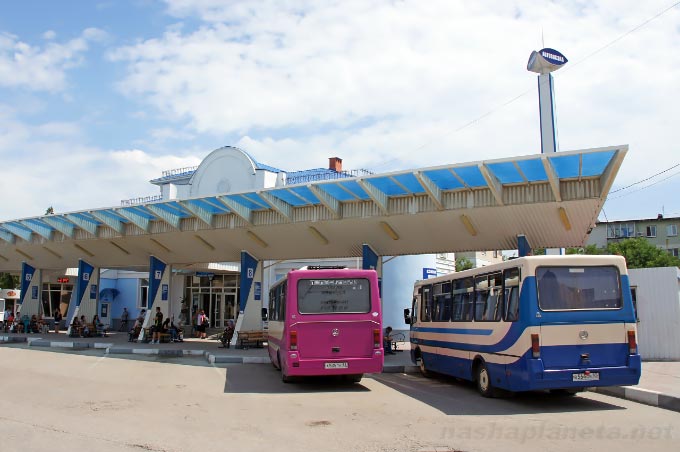 Yevpatoria are connected by a very developed bus connections with the cities of the Crimea and the Krasnodar territory. Buses here go at least from Krasnodar, Rostov-on-don, Derbent, Pyatigorsk, Vladikavkaz and Moscow. In high season (July-September) direct buses go to Evpatoria from the regions, but it is mostly not regular and branded tour buses and their schedule and cost should be arranged locally in the regions.

All the bus arrive at the bus station in the centre of town, Internatsionalnaya St., 124 (bus station of Yalta on the map). From her to the tourist area and the seafront can be reached in 30-40 minutes by bus number 6, 6A, 9, 10, 13, tram No. 3 to the Lenin Avenue. Of course, the station is on duty a lot of taxi drivers offering trips at inflated prices, but it is necessary to go beyond the station, prices fall.

By car or drive to border, cross it and continue by bus or taxi. ...
Re: Yevpatoriya and vicinitiesmarmiladka June 30, 2019

From the local heard that "thank God he's gone" ...
Re: Yevpatoriya and vicinitiesostkuj@mail.ru 4 January, 2020
And does anyone have pictures inside of the Turkish bath on Krasnoarmeyskaya? We are in the middle of 60-ies often went to rest in Evpatoria with my grandmother,lived in Kiev, at the beginning, almost. .Remember the small entrance from the locker room into the bath.I had to bend over to get there.Above the entrance was modeling-curly-haired head and a mustache .I always wondered how women moustache) I Think now it was the men's ward)We had friends there when it was a holiday,no one bathed.Inside there were a few areas in a large Central marble table.And marble everywhere.Beauty.I read that now it is not,stripped and somewhere Delhi..Sorry. ...
To reply or discuss the topic on the forum
POPULAR TICKETS
Sochi(Adler)2 165₽Crimeafrom 4 290₽SpBfrom 1 940₽Kazanfrom 1 524₽N. Novgorod3 692₽Samara3 170₽NvSB7 880₽EKB4 330₽VL-K21 374₽Londonfrom 3 367₽Yorkfrom 10 080₽Barcelonafrom 8 056₽Beijing22 447₽Parisfrom 5 766₽Romefrom 8 427₽Top 100 tickets out of your airport here
⌃
✖Календарь недорогих авиабилетов