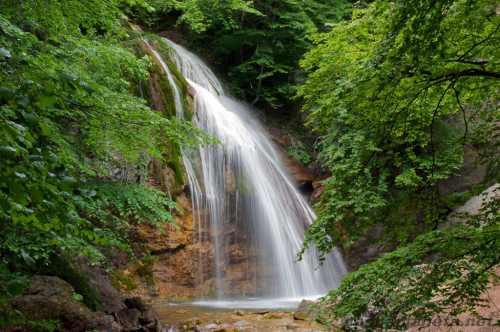 The Djur-Djur waterfall is considered the most full-flowing waterfall of Crimea, and one of the most striking attractions of Alushta. Its height is 15 meters, width of about 5 meters. Even in the dry season it does not dry out, although, of course, is not so spectacular as after rains.

Above the river is still a few rapids of waterfall, in swimming pools where one can safely swim, but the water is freezing. Around the beautiful woods of Haphal reserve. 200 metres is the cave Jur-Jur, but it is not designed for mass tourists. Also from the waterfall trails start at the top of Demerdzhi North and South, falls Dzhurla, to the valley of ghosts. But it's very long walks not on the same day, and generally, tourists prefer to come down from the peaks in the Haphal gorge and waterfall Dzhur-Dzhur.

The waterfall is relatively easily accessible for all categories of tourists, and it is easy to visit as part of guided tours and independently. Read below detailed information on how to get to the waterfall Jur-Jur.

🚶 How to get there: the waterfall is located on the territory of the reserve in the Haphal gorge haphal near the village General (waterfall Jur-Jur on the map). To get here easier and cheaper just part of an organized tour which will cost 750 rubles. The trip alone will cost more, but if you organize a trip with a group of several people, it is cheaper.

First you need with a long-distance bus station of Alushta to take a bus to the fishing or Walleye (through fishing), but you need to go to the village Solnechnogorskoye. Buses depart on schedule every hour, tickets can be purchased in the bus station ticket office, 33 rubles. Further, from Solnechnogorsk need to get to the village General, but the buses go very rarely. To walk (9 kilometers), so in Solnechnogorskoye right next to the stop on duty taxi drivers who offer to drive to the village General 500 rubles round trip, or for 1000 almost to the waterfall and back (price per car). If you walk a little deeper into the village, you can find a jeep for 350 rubles per person to the rank of General, or 450 per person to the falls. Do the walk to the waterfall on horseback for 1500 rubles. If you choose a trip to the village and not directly by the waterfall, before it will be take 20-30 minutes, the walk is pleasant and interesting.

You can also drive to the village General directly from Alushta by bus No. 111, for 50 rubles. The bus departs from the bus station of Alushta, passes through a ring on the area of "Soviet", and then very slowly and long rides in General through the village Solnechnogorskoye. Is scheduled 2-3 times a day.

If you get to the waterfall by car, keep in mind that local residents make trips by jeep to the waterfall, and too active to offer their services including those who came to the village in his car. They meet visitors at the entrance and offered free of charge to Park, and then explain that to the waterfall is very far, you do not come, and the like. Don't believe it. Even in a car you can drive further from the start of the village to the Parking lot in the southern part of the village, and there leave it near the cafe (see Parking map). In an SUV you can drive another half a mile on the awful bumpy road up to the next car Park where the waterfall by hand.

Photos of the waterfall Jur-Jur

Thanks for the feedback. Soon information about Alushta and the surrounding area will be renewed and will become even more. And yet, if you are looking for in these parts a place with a quiet, sparsely populated beaches, I recommend another look at Solnechnogorsk. Personally, I like it more than fishing, as something more comfortable out there, the beach is well-groomed, not as "dead" as in fishing. However if you on your car and tent in Solnechnogorskoye no normal camping as in fishing. And not to be confused with solnechnogorskaya Ulitsa. These villages are near, almost merged into one, but the beachfront in Malorechenskoye very tiny. This is my IMHO, of course, just recommend. ...
Re: Alushta and the surrounding areaAndrew Homutovskiy March 20, 2017
Resting in the azure from Rostislav(his phone+79788073534 ). The houses are modest, inexpensive. The nature of valid great. Among the shortcomings there is no infrastructure, the benefit of Alushta 3 km away. ...
Re: Alushta and the surrounding areaBob 13 August, 2017
Villa Alina Slutsky St. 33 Alushta, SC azure, Republic of Crimea does not the village of Azure. Mountain lake Castel? There is no such. There is a lake Mountain for Grape. ...
Re: Alushta and the surrounding areaadmin 13 August, 2017
Thank you for the clarification about the mountain lakes, it is, of course, about the mountain Castel corrected. But Villa Alina is still according to the maps located in the azure, rather than on the edge of the Professorial corner, almost azure. ...
Re: Alushta and the surrounding areaЮлия1209 19 December, 2018
The rest chose to 2018 in the Crimea. Long thought, in what city or village to go, which hotel or hotel to choose, read many reviews, listened to the advice of friends and decided to stay at a wonderful place called the Utes at the hotel Santa Barbara 3**. I want to say, earlier, was vacationing abroad - Turkey, Egypt, Italy, Spain, in the Crimea, in Yalta, Alushta, Gurzuf, traveled on tours the whole of Crimea, but such a heavenly place not seen anywhere else. The village itself attracts with its beauty and atypical. The Utes near Alushta, in my opinion, even, is the town of Alushta to Yalta 30 minutes, i.e. convenient location, You will be able to get in the direction of Alushta is very fast, and in the direction of Yalta. A tiny village located on the mountain attracts with its coziness, little Italy. Who would have thought that in Crimea exists???)))
Regarding, hotels and accommodation. Very responsive, friendly and welcoming staff. Feel every day care of yourself! We lived in a room with a sea view. Every day you Wake up with the sea, fall asleep with the sea! Fantastic! The hotel called Santa Barbara 3**, one of the most famous hotels of the Cliff, the village itself is often called Santa Barbara. The hotel itself is located right on the waterfront, i.e. out of the hotel and here's the sea, the beach! The room has everything you need. Pleased with daily maid service, change of linen and towels every three days! At the front Desk administrators will always help, prompt, advise and not least important, will give You their smiles and warmth. We had two meals - Breakfast and lunch. Breakfast and lunch we had at the restaurant Santa Barbara over the sea, the restaurant is right on ...
To reply or discuss the topic on the forum
POPULAR TICKETS
Sochi(Adler)3 570₽the Crimeafrom 5 655₽SpB2 101₽Kazanfrom 2 598₽N. Novgorodfrom 5 to 250₽Samara3 970₽NvSB8 236₽EKB5 498₽VL-K21 026₽Londonfrom 3 470₽Yorkfrom 19 555₽Barcelonafrom 6 763₽Beijingfrom 19 135₽Paris9 363₽Rome8 135₽Top 100 tickets out of your airport here
⌃
✖Календарь недорогих авиабилетов