This page is automatically created by the automated computer text translator, and originally written in Russian (Переведено сервисом «Яндекс.Переводчик»). The original version of this page in Russian is located here. We are apologize for any possible inaccurate and incorrect translation of certain phrases and expressions below.
ADVERTISING: THE MOST POPULAR TICKETS
✈ GMT.-Nwsb ⇄ 8 200₽✈ GMT.-VL-K ⇄ 15 601₽✈ GMT.-Simferopol ⇄ 4 632₽✈ GMT.-SPb ⇄ 2 000₽✈ GMT.-Adler ⇄ 3 496₽✈ GMT.-N. Novgorod ⇄ 4 723₽

Teberda (Teberda, also Teberda) – a town in Karachay-Cherkessia, located at an altitude of 1280 meters above sea level in a mountainous area of 1600 kilometers from Moscow and 22 km from the popular ski resort of Dombay (Teberda on the map of the Republic). The city's population of more than 8 and a half thousand people, far more than the famous Federal district, which has about 650 people.

Teberda is a town-resort, though much less famous than his younger brother Teberda. But the rest is quite different. This therapeutic balneal and climatic resort, no skiing here is not in sight, as a developed tourist infrastructure. Treatment is due to the beneficial effect of the mountain climate of the Teberda, and they are: reduced atmospheric pressure (600-650 mm of mercury. century), low humidity (70-75%), a large number of Sunny days, high air ionization, a large difference of air temperatures during the day, small annual fluctuations in temperature, clean air and water. Also the treatment is conducted the therapeutic mineral waters from local mineral springs.

In addition to treatment, Teberda interesting tour of the surrounding natural attractions. The city is surrounded by the territory of the Teberdinsky nature reserve, which offers Hiking trails to beautiful places: mountain lakes, waterfalls, mineral water springs, valleys, gorges, and, of course, mountains. And only half an hour away is the famous Dombay, where there is not only skiing, but also some great Hiking trails.

Most tourists going to this part of Karachay-Cherkessia, do choose as a place to stay the resort village of Dombay, where there is a developed tourist infrastructure and a sense of fun of the resort. But if the purpose of your vacation – not skiing, and Hiking, or medical tourism, and calm, it is possible to stay in Teberda, the more that the price of accommodation here below. Particularly strong difference in price is felt during the high skiing season in Dombay, which takes place in the winter.

At the same time it is understood that Teberda is not the resort for entertainment. The decor is quite rustic, no entertainment apart from the aforementioned natural beauty and several attractions here. If we ignore all the beauty of the mountains and located in the city motels and guest houses, it is quite a strong Russian heartland with neskolkimi shops and market in the center, and a large part of the city - just the private sector. If you compare Teberda even with much more modest in size Dombay, the latter benefits greatly in terms of development of tourism infrastructure and atmosphere. Therefore, we would recommend with great care to choose a Federal district as the location for a long vacation, but to call in here for a couple of days in order to explore the natural beauty and breathe the mountain air, definitely would recommend.

As we already mentioned, developed tourist infrastructure here, but all that is necessary to stay there. The town has a market, several grocery stores and necessities, pharmacy, petrol station, cafes and restaurants. Network of supermarkets and shopping malls there. Plastic cards are accepted in few places, but there is an ATM Sberbank and Rosselkhozbank.

In Teberda there are dozens of accommodation options in the form of medical health centers, the usual tourist hotels and guesthouses, as well as many private apartments (apartments or rooms). For a tourist stay in the city for a few days is enough to book accommodation in hotels or apartments, but if you're going to be here longer makes sense to look in the direction of resorts or pensions, including health and nutrition. But to reserve it they need long in advance.

Find and book accommodation at motels, hotel, guest house or private apartment in Teberda can at the following sites: 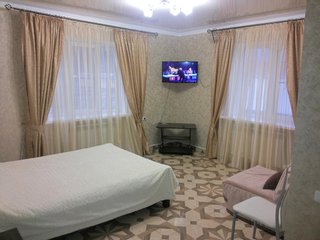 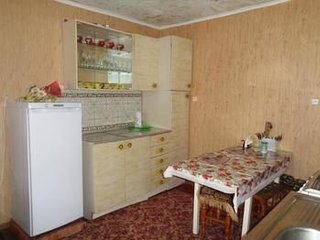 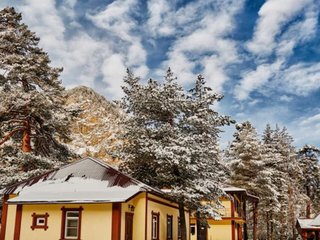 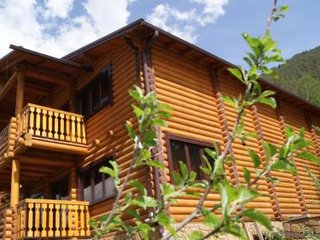 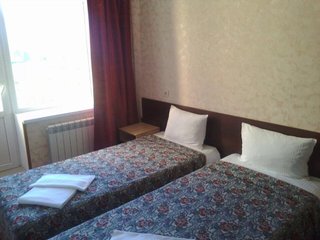 Hotels Teberda on the map

Teberda is a year – round resort, but the seasons vary depending on the purpose of your trip. In the summer, of course, you will not go there for skiing, but winter is not worth it to go here to see the sights. Here is more info about the tourist seasons in Teberda, so you can decide for yourself. When you go there:

Current weather in Teberda/Dombai and forecast

Teberda is located 1600 kilometers from Moscow and 22 km from the popular ski resort of Dombay (Teberda on the map). Unfortunately, to get here – not such a simple task, since transport underdeveloped. By plane or train will have to first get to Mineral Waters, Stavropol, Nevinnomyssk, Rostov-on-don, and from there take a taxi or bus, and sometimes also with a connection. Direct buses from the regions of the Russian Federation to Teberda very little. The only way to directly direct to get here is to go to his car. In the high season (winter) from Kislovodsk, Moscow, St. Petersburg and other regions to start direct commercial flights to tourist buses in Dombay, which can be reached in Teberda.

Read more about all the ways how and what to get to Teberda here... 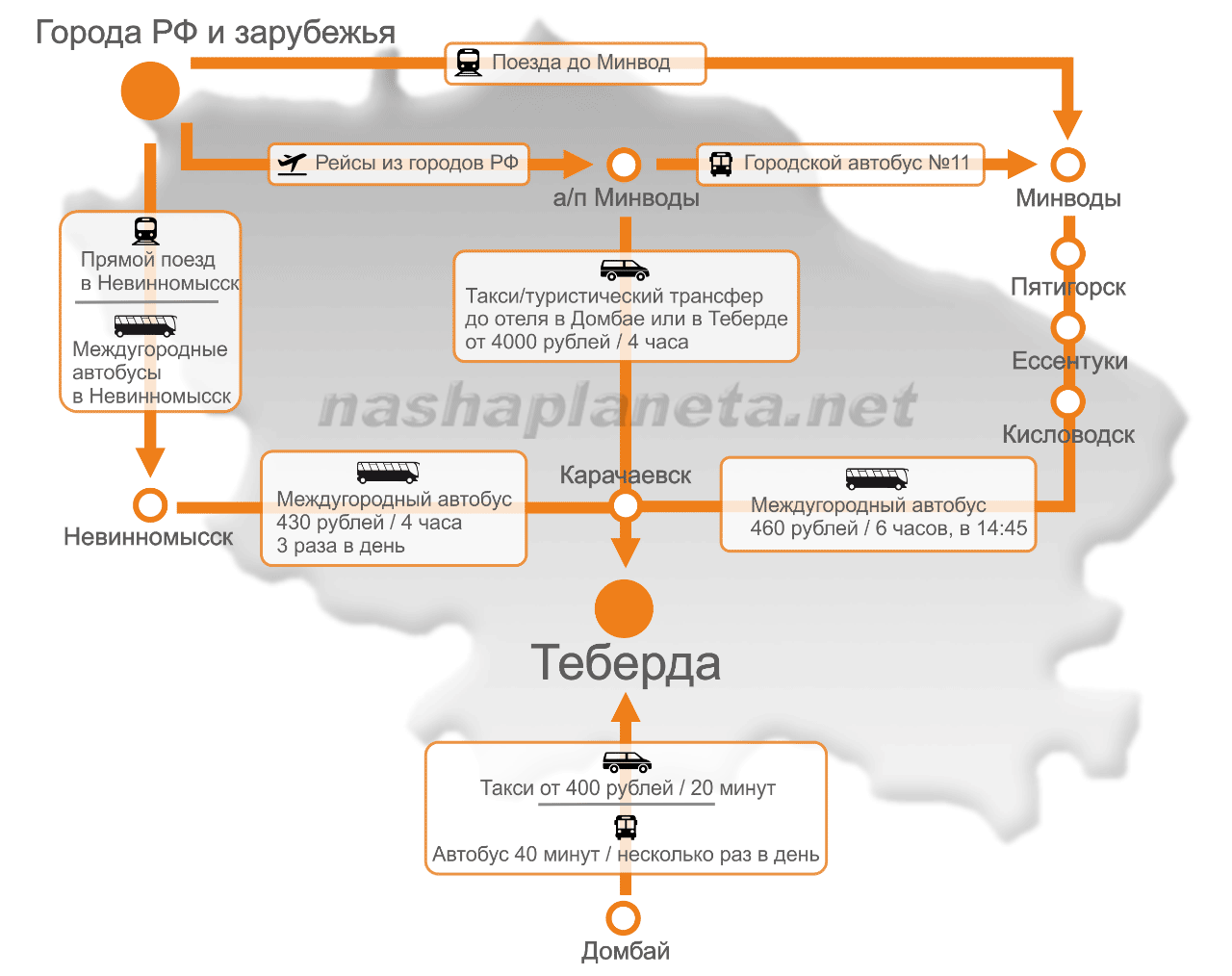 In Teberda is home to several iconic landmarks that come to see from Dombay and even from the resorts of the Stavropol territory. So, you can visit the zoo of the Teberdinsky nature reserve, where animals kept in cages, and some of them even close to "communicate". Still here is the House-Museum of Prince I. P. Krymshamhalov and trout farm. Other interesting sights are outside the city but easily reachable on foot or by transport. Also from Teberda visit the sights of Dombay.

Of entertainment in Teberda offers horse riding and Quad Biking, rafting, fishing for trout in a trout farm, trips to thermal springs at the moment. And there is even an artificial pebble beach at lake Kara-Kel in the center. As for evening entertainment, but to sit in a cafe or take a walk through the dark streets, do nothing.

Read more about all of the attractions of the Teberda here...