Gudauta (Gudauta) is a small resort town on the Black Sea in Abkhazia, the administrative center of Gudauta district (Gudauta on the map of Abkhazia). The population was just over 8,000.

In this guide to Gudauta, you can read everything you need for independent travel or vacation at this resort. If you prefer an organized tour, find and book tours in Abkhazia, including a deferred payment, you can use the following proven services online search and booking of tours, or by using the search box:

Gudauta is a traditional relaxing beach black sea resort. Like most of the other small resort towns of Abkhazia, it is in disrepair and is not distinguished by its beauty: the roads and sidewalks are broken, city Park abandoned, dilapidated buildings. But stay in Gudauta has its advantages. First of all, the atmosphere is calm, almost rustic, of tourists even in the height of the season very little. After a noisy, crowded with tourists and transport of Gagra, Pitsunda and Sukhumi, Gudauta – it's just a real area of tranquility. If you don't need entertainment, sightseeing, guests comfortable in the hotel room, tourist infrastructure, then this resort may be for you.

The beach in Gudauta good, and also has its advantages. As already mentioned, tourists it is very small, but there are umbrellas, chairs, cabanas, and a few cafes along the coastline and strut bar on the beach. The beach is sandy-pebble: pebble is at the edge of the water and under water; the sand farther from shore, large and grey. What else is good, the beach is almost mutilated with a rusty concrete structures and breakwaters, as at other resorts of Abkhazia. Stationary no entertainment, only in the high season, it can appear a banana boat ride, parasailing, and watercraft rental. But their appearance depends only on the number of tourists in the season, so it might not be. The water is clear, but the coastal strip clean not often accumulate debris.

The tourist infrastructure in the town is very poorly developed. In fact, besides a couple of dozen accommodation options and several cafes there is nothing touristic. Entertainment apart from the beach too, no, no.

Attractions in Gudauta no, unless you count those well-groomed Park and a few monuments preserved from the Soviet era. There's a Museum of the Patriotic war of Abkhazia (opened in the year 2081,), the Museum of Abhazia Museum and Barn. Independently by taxi you can go by bus to New Athos and see the sights there, visit the hot springs Square. Theoretical throughout the day you can go to Sukhum and Gagra, but there is nothing special to watch. On the transport you can go to more interesting places, including to visit the nature reserve Ritsa and Ritsa lake, and other sights of Abkhazia. If your transport is not, you can buy a group tour, but only during the high season.

Hotels in Gudauta, where to stay

Be accommodated in Gudauta in hotels, guest houses (guesthouses) or in private apartments. These hotels are only a few, the greater part of accommodation are private houses or apartments that rent through the system of search and booking of hotels. The quality of housing, cleanliness and housekeeping in many accommodation options very low and does not correspond to the specified prices, so when choosing, you should carefully read the reviews.

Find and book accommodation in Gudauta at the following sites, or using the search form below: 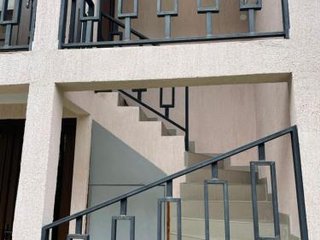 SurfWhile people nothe price of the room from 1612₽Check price 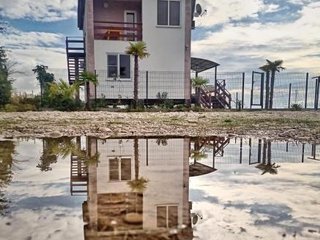 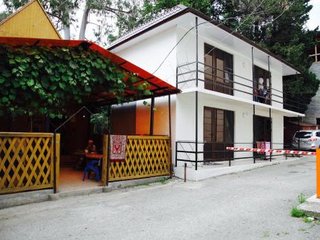 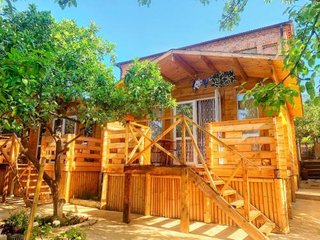 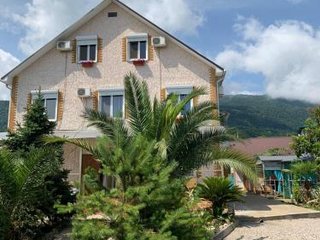 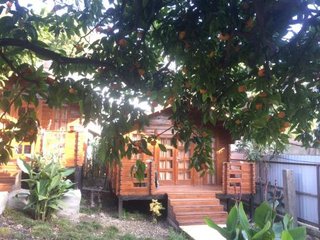 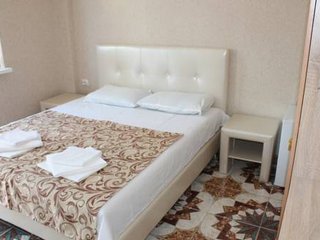 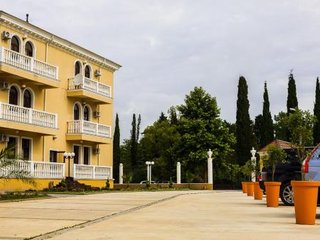 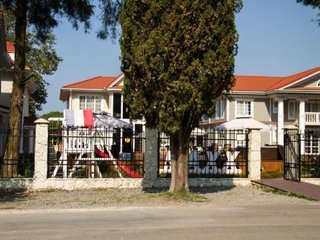 Hotels in Gudauta on the map

Weather and tourist seasons in Gudauta, when to go

As in the whole of Abkhazia, the tourist season in Gudauta runs from may to October and the peak season in July and August. In may, Gogate already hot enough to sunbathe although the sea for swimming too cold. In October, on the contrary, the sea still keeps you warm, but the air is becoming cool.

Seasons in Gudauta months, when is the best time to go

Current weather in Gudauta and forecast

How to get to Gudauta

Gudauta is located 70 kilometers from the border crossing on the border with Russia on the main road of Abkhazia, which before the town can be reached in a couple of hours (Gudauta on the map of Abkhazia). To reach here by bus, train or car. By plane you can get through the airport Adler (Sochi).

The citizens of Russia better get in Gudauta, the Russian Federation via the Psou checkpoint in the village of Fun (Sochi) at the internal Russian passport, and overseas in any case are not present. Stamp in a passport on crossing the border of Russia-Abkhazia can bring serious problems when you visit Georgia (see more about this How to get to Abkhazia). If you want to get here officially from the point of view of the Georgian authorities, it can be done only by foreign passport after obtaining appropriate permits through the checkpoint "Inguri" on the border with Georgia.

Below are all the ways to get in Gudauta alone, and also you may find useful the following information:

Transportation in Gudauta, how to travel around the city

Public transport in Gudauta no, the city is too small. Navigate here on foot, and in order to get from the train/railway station or from the road to the hotel and back, you can use the services of local private cabs.

To budget from Gudauta to go during the day in Sukhumi, New Athos and Gagra, you can go on the highway, and there to catch any passing taxi in the right direction.

Comments / recent posts on the topic on the forum
Re: Holidays in AbkhaziaAlexander the Warrior July 29, 2019
Hello! Who like to arrive with a link to the border with Abkhazia and after. It is more profitable to take? And is it possible at Adler airport to purchase a SIM card for use in Abkhazia? Thanks in advance) ...
Re: Holidays in Abkhaziaadmin 30 July, 2019

No matter any of the two operators take, there is no difference. About airport can't tell always by car went. Only one note: immediately after crossing the border of the Russian SIM cards do not use, communications from America will cost, damn it. ...
Re: Holidays in AbkhaziaLelik.o77 4 August, 2019
Now stationed in Abkhazia under the New Athos, the village of Primorsko. Came here ( on their own, without a vehicle)to receive medical treatment. Crossed the border in 20 minutes, without personal inspection. 10 minutes of hydrogen sulfide, the source of healing mud. Highly recommend for joints and blood purification. What about respect, do not worry, here all have wifi. The SIM card put in airplane mode using 5 km after the border. The money is not removed... spoke calmly by telephone immediately after crossing the border( like a house). A lot of minibuses, the fare is cheap. Before Athos was 200 RUB., 1 hour 20 mins with a breeze. All Abkhazians are very friendly, always ready to help and give. If you do not stay in a hotel, very cheap. The private sector 350-500 RUB 2-bed room per day. You can negotiate with food. The food they serve is phenomenal! All a good journey. ...
Re: Holidays in Abkhaziaaaaaal 6 August, 2019
Was in Abkhazia last year. Experience the best! the food is delicious, the people are friendly (contrary to rumors). And the sea...it's just a thrill. clean, unlike the dirty Anapa. Going to visit the country again this year. Many do not have time to look...
Re: Holidays in AbkhaziaMitya August 31, 2019
And I on the contrary came in. Last year went 40 thousand left there 3 weeks. I liked everything. It is clear that the service is not developed yet, but I try and it is captivating. ...
Re: Holidays in AbkhaziaChester September 8, 2019
Last year there 8 times dangled from Adler. To rent a house there was. Pros - sea, nature, sparsely populated, the nostalgia for the Soviet Union, the sights. Minus all the abandoned, bus, driving on the road dangerous, there are few shops, pretty boring. There was a bad incident in Sukhumi with local security forces in plain clothes, passed the house of Moscow, and I caught up with the car, it stopped me abses - took me for zakladka drugs:(, found a common language, even before the station was taken, on the transfer in Psou on this day, our border guards at the exit for no reason at all asked where I'm from (town of Abkhazia).
In my opinion the best location in Pitsunda, where Sands (fishery) and in Athens, they say there are still musra, but haven't been there yet. There are many stray dogs (lying crushed on the road and walk along the beaches), cows walk on the track, a lot of wine and chacha. Syringes on beaches. Turkish radio stations are audible. Breathe irregularly to Turkey. Echoes of war, all monuments and obelisks. Exotic still the same. But, in my opinion there mentally and spiritual people. And more freedom - there are no such restrictions in Russia, border crosses, as if a stone from his shoulders. Will go there again. For extreme relaxation. ...
Re: Holidays in AbkhaziaRomantik November 20, 2019
Was in Abkhazia more than once. Although it was a long time ago. Me and the family arranged everything: sea, nature, air, attitude. I want to go back. ...
Re: Holidays in Abkhazianausla 20 November, 2019
And judging by the old town square on your avatar, more like Prague.)) ...
Re: Holidays in AbkhaziaSkyler 21 November, 2019

That's a hundred percent agree, I was there last time three years ago and apparently nothing has changed in that time. And greatly surprised the locals - had rented a house from private owners, so all the toilets and kitchen on the street, absolutely no comforts of home, but all in the hand of smartphones and all chatyatsya somewhere :lol: :lol: so amused by this fact :lol: ...
Re: Holidays in AbkhaziaSwallow December 9, 2019
All I was thinking about Abkhazia, but after listening to friends - so you shouldn't go at all. As they say there are no special conditions, infrastructure, nothing. I do not know. At least in principle, we have in Sochi is not perfect everywhere, but it is still heart isn't in it yet. ...
To reply or discuss the topic on the forum
POPULAR TICKETS
Sochi(Adler)3 570₽the Crimeafrom 3 689₽SpB2 460₽Kazan2 190₽N. Novgorod4 932₽Samara3 570₽NvSB7 998₽EKB3 998₽VL-Kdated 17 826₽Londonfrom 3 069₽Yorkfrom 20 553₽Barcelona6 199₽Beijingfrom 17 508₽Paris6 326₽Rome6 660₽Top 100 tickets out of your airport here
⌃
✖Календарь недорогих авиабилетов