How to get to Sapa, transport

How and what to get to Sapa

The cheapest flights from Russia to Hanoi:

The easiest way to get to Sapa is to buy a package tour from Hanoi. In this case, you will be spared most of the problems with transport, hotel transfers and accommodation, all included and organized. To purchase these tours in advance, reserve them via the Internet (e.g. http://sapatours.com, http://www.vietnamstay.com/tour/sapatour.htm or http://www.thesinhtourist.vn) or purchased in Hanoi. Prices start from 100$. Tour programs are very different from each other, and may include not only a stay in the city, but also trekking tours, climbing Fansipan mountain and so on. In some cases there are even tours without a stop in Sapa: the tour starts with meeting at/railway station of Lao Cai, transfer to Sapa, where you leave your Luggage and take a shower at the hotel, immediately go to the mountains, spend the night in the camp, the Guesthouse or in the homes of local residents, and at the end of the tour you will be transferred back to railway station. But carefully approach the choice of the program tours study included in the itinerary sightseeing and intensity. The fact that some tours, such as one-day climbing Fansipan is not a force unprepared tourists.

Before you decide to purchase the tour from Hanoi, read the opinion about a similar trip "in Sapa. A one way ticket..." do not think that the reference to this opinion, we advise against purchasing a packaged tour. We did not consider the trip as in the recall, failed. You should just be ready for some difficulties, that's all. But this does not mean that these difficulties will arise.

Well, if you choose to travel to Sapa independently, as a whole, the itinerary will look like this: from Hanoi, you need to overcome 300 kilometers from Lao Cai city (Lao Cai) by train or bus (about 9 hours) and then climb up a mountain road by car or bus (about half an hour and 34 kilometres). There is a simple and cheap method is direct tourist bus Hanoi-Sapa.

It is also worth to mention another direct route from/to Sapa – the city of Dien bien Phu (Dien Bien Phu). This small border town is usually the halfway point on the way from Sapa or Hanoi to Laos and back. With the SAP it is connected daily bus route cost 14$. Read more about this route you can get information here http://pinocchiohotel.com/en-services-35/bus-ticket-hanoi-sapa-laos-kunming.html

Now, more about how to get to Sapa from Hanoi:

By train from Hanoi to Lao Cai-Sapa 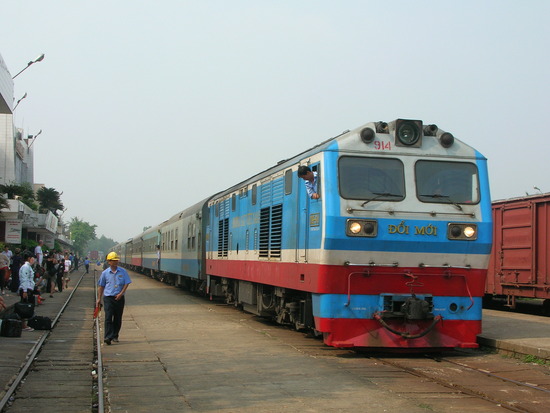 The trip from Hanoi to Lao Cai by train is 9-11 hours. Runs daily, at least 8 trains, most of which is nocturnal.

Buying train tickets, keep in mind that it consists of branded cars from different companies, and, accordingly, the price and service will vary (see types of cars in Vietnam, trains). But don't be fooled by the fact that if you pay more for your ticket, you'll get the best service. Some companies sell more expensive tickets to cars that are no better than the standard, and the only difference, fewer locals and more tourists. In any case, the standard cars is not worse than the cars of many trains in our vast country for weeks, and here only 9 hours.

And another small but useful tip: the trains in Vietnam mercilessly conditioned and sleep in them really cold even under the blanket. So either dress warmly or bring a tape (not the same, what to drink and which to glue) and paper to seal the vents on the ceiling.

Trains on the North-Western direction to Lao Cai depart from the main railway station in Hanoi (Hanoi main train station Ga Ha Noi), which is located in the city center at 120 Le Duan. To buy train tickets in advance and best directly at the ticket office of the station. Travel agents and ticketing offices add to the cost of tickets Commission, moreover, does not sell tickets for simple inexpensive trains. You can also book and buy tickets online on the website http://www.vietnamtrains.com or http://www.vietnamrailways.net the prices are quite high. Can also buy your tickets through the search form of tickets to Sapa below.

The station can also be purchased very cheap tickets just before the departure of the train, as the unsold tickets to sell at reduced prices special cash Immediate Train Tickets (located in the waiting room of the railway station in Hanoi), but you can stay and no tickets. And another point: it is best to buy in Hanoi immediately and return tickets, as most Sapa tickets can be purchased with a large wrap, and in Lao Cai before departing the train tickets may not be available to the same railway ticket offices in Lao Cai only work a few hours a day.

The tickets are of different classes: sitting, supine, supine with the bed. Tickets cost from 110 000 Dong (currency of Vietnam) (about $5) for a seat in conditionerbedroom the car, to 450 000 VND reclining in air-conditioned compartment. Prices for tickets in branded cars go up to 300$.

For children up to 5 years doesn't need a ticket if they do not occupy a seat.

The train schedule may change. Today the schedule can be found on the website http://www.vietnamtrains.com (not the full schedule, the only tourist cars), http://saigonrailway.vn (full schedule, but only in Vietnamese) or through the search form of tickets to Sapa below.

From Lao Cai to Sapa by bus

From the railway station in Lao Cai (Lao Cai Valley) to Sapa can be easily reached by mini bus or big bus. Conditional bus station (more of a bus Park) is crazu when you exit the station at Lao Cai. The cost of the trip is 50,000 VND. Distance – 40 kilometers; journey time is just over an hour.

With suggestions to take you to Sapa, you will meet immediately upon exiting the train, and even on the train. But do not rush to accept such proposals. Here a so-called "taxi mafia": young people caught sleepy tourist arrivals, put them in minibase, raising money for the travel and disappear. As a result, you will either sit an hour or two and wait for the driver who would say that knows nothing, and again ask you money for travel, or just not wait for the driver, because it seems some minibase here even never go. The trick relies on the fact that tourists just get tired of waiting send, and they will go away to find another mini bus. So look for a bus or mini bus that is already filled with tourists, and give money only directly to the driver or when you are sure that the driver sees the process of transferring money. And next to building works corporate office where you can go and just buy a ticket for the next departing the big bus.

On the bus from Hanoi to Sapa 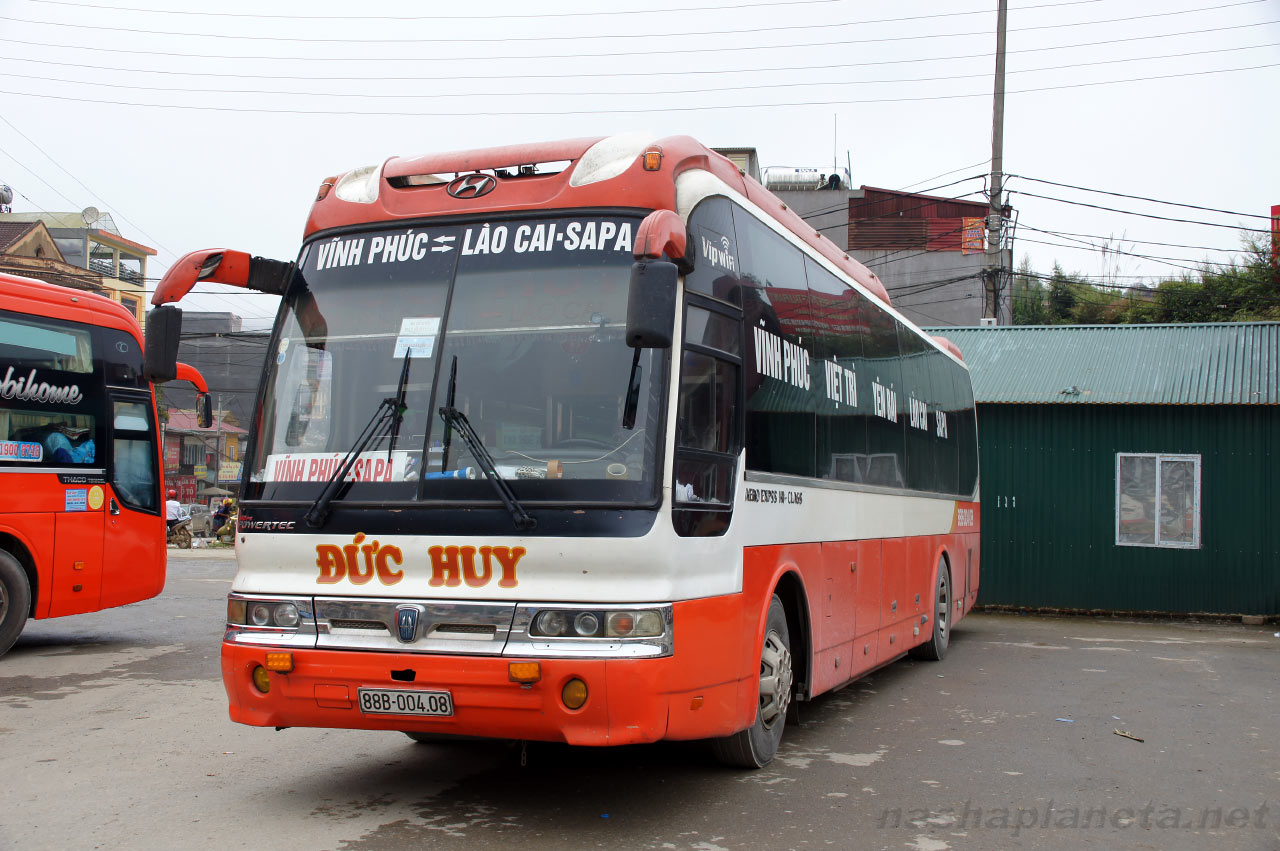 There is no direct bus between Hanoi, Lao Cai and Sly. The bus ride will be faster (about eight and a half hours) than the train, and relatively cheaper. Buses of different companies, ply daily, several times a day and night. You can buy a ticket directly to Sapa and Lao Cai. Night sleeping bus (Sleeper Bus) it is convenient to move, to sleep.

In Sapa, the buses arrive and depart from the bus station in the Eastern part of the lake, it is almost the center of the city and tourist area.

A return ticket on the bus from Sapa to Hanoi better to buy in travel agencies or in hotels and at the bus station, because in this case, it will take you to the tourist area in Hanoi, while the local passengers landed on one of the bus stations somewhere in Hanoi. The cost of the ticket: Sapa-Hanoi at the station 300 000 VND, the agencies 320 000-350 000.

There are two flights (day and night) on the route Sapa-Hanoi-Halong. The price is 450 000 VND,

To view a detailed schedule and if you want to book a train or bus to Sapa can through the search form:

Transport Sapa, than to move on but the city and surrounding area

In Sapa is no public transport. To move around the city on foot, by taxi, motorcycle taxi or rented transport. Affordable rental cars and minivans with driver.

The city itself is small, and all of it you can get around on foot. To explore the area, attractions or villages, the ideal option would be rent of vehicle – motorcycle or bike. The cost of renting a motorbike in Sapa – 4 dollars per machine, $ 5 machine (in 2013), and more! Bikes some hotels do offer free. Hire in almost every hotel and on the street, if you offer a price higher than 4-5 dollars, look for another place. But again, theoretically, a motorcycle with an engine capacity of more than 49 CC without a license issued in Vietnam will be illegal. In practice, when renting you have rights no one even asks, and police officers on the street to foreigners on motorcycles do not pay attention, unless you grossly violate the rules in front of them and ride without a helmet. Read more about renting a vehicle here in Vietnam.

Between Sly and the nearby town of Northern Vietnam there is a regular bus service. Buses depart from the bus station, located at the Eastern tip of the lake, near the city centre. There you can check the schedule and buy a ticket. There are at least 11 flights between Sly and the cities of North Vietnam.

The schedule of buses and trains to Sapa