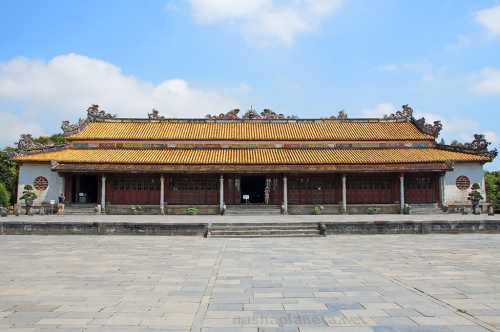 The Central attraction of hue is the Imperial citadel (fortress). This place is also called the Royal Palace, the citadel of hue, Imperial hue or just a city within a city. This is the main attraction of the city and its must-visit.

The citadel is not the ancient landmark, its construction started in 1804 by Emperor Gia long (Gia Long). However, despite its modest age, the citadel has experienced many historical events, including the was very seriously destroyed. Still there are restoration work and every year, offers access to all the new halls and palaces in its territory.

The citadel really is a city within a city. The entire fortress surrounded by a moat and walls with a thickness of 2 meters and a size of 2 by 2 kilometres. The total length of walls subject to bending is 10 kilometers. Today, inside the citadel there are houses, markets, museums, restaurants, in General, life in the fortress today runs its course. 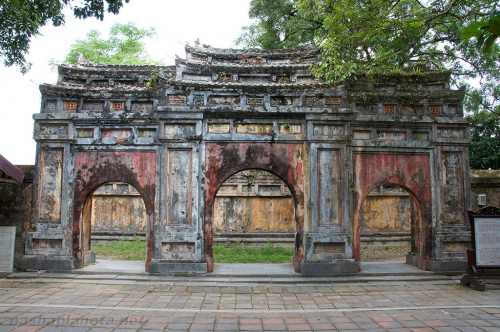 One of the gates of the citadel

But in a separate part of the citadel, the Royal Palace (Royal Palace or Hoang Thanh), daily life has not penetrated. This is another city inside the city inside the city! Access to this part of the citadel paid – 105,000 VND. Traffic, except special tourist electric cars is forbidden here, so you should have time and strength, after all, for a visit to the Palace will need at least half a day. The admission also includes a visit to the Museum Bao Tang (Hue Royal Antique Museum), located outside the Palace walls on the East side. With the ticket you will receive the mini-map guide book with the designation of the most interesting places in the territory.

The grounds of the Royal Palace comprises at least the following main attractions:

Photo of the Imperial citadel of hue

Comments / recent posts on the topic on the forum
What to bring home from Vietnam?Artenders 12 August, 2019
Snake whiskey is sure to bring. ...
General questions about VietnamIrinalapova 6 October, 2019
Rouge here interesting people. Met them in Hanoi. They differ in appearance and way of life from the rest
...
Halongadmin 9 October, 2019

Well, if I write with people, so will strip off of each. But if it is written that for guide, probably 3000 for the guide and all. So it is logical should be that of a guide one-time pay, and all. He's not twice will work with two tourists. But better ask them on the website question directly, they have the same form there is. ...
Sapa and its surroundingsadmin November 26, 2019

This is probably about the tracking, I hope correctly understood. Yes, the link was wrong. That's about the tracking details https://nashaplaneta.net/asia/vietnam/sapa-dostoprimechatelnosti-trekking ...
Common questions about Hanoiadmin November 29, 2019

And what does the travel forum? ...
Peculiarities of national shopping. Vietnam, Nha Trang.(fruits, coffee, rum, and so on)Swallow 10 December, 2019
Thanks for the feedback. I read with interest. Adopted! ...
Common questions about Phan Thiet/MUI ne January 7, 2020
Was in December 2019 at the fairy stream. the entrance fee!!!! 15000 Dong or 45 rubles. Tickets issued at the box office! ...
The currency of Vietnam and other financial issuesadmin 25 February, 2020

Hello Victor! In theory works in practice, not heard from friends of travelers that it began to be widely used, but maybe I'm just not in the topic yet, because it only launched at the end of the year. So you go and try, maybe then I will unsubscribe. Just keep in mind that the situation of the World might be like in Turkey, i.e. you can withdraw money and pay only a specific terminal of the Bank, and not everywhere. By the way, in Turkey it is even a good idea to remove, no Commission, checked in November last. As for warning the Bank, I always warn. and advise you. ...
Visa issues and other issues entering Vietnamadmin 25 February, 2020

Today another one the same started, all crazy prices, take a look in the canal https://t.me/nashaplaneta_net or the group - https://vk.com/nashaplaneta2011. However, the Philippines are expensive, but to throw probably. ...
Forum on da Nangadmin 28 February, 2020

Very doubtful, given that the only entrance now 750т. worth it. Well, on the website there is nothing on this, at least I have not found. ...
To reply or discuss the topic on the forum
CONNECT
⌃
✖Календарь недорогих авиабилетов