How to get to Hanoi, tickets

To Hanoi by plane 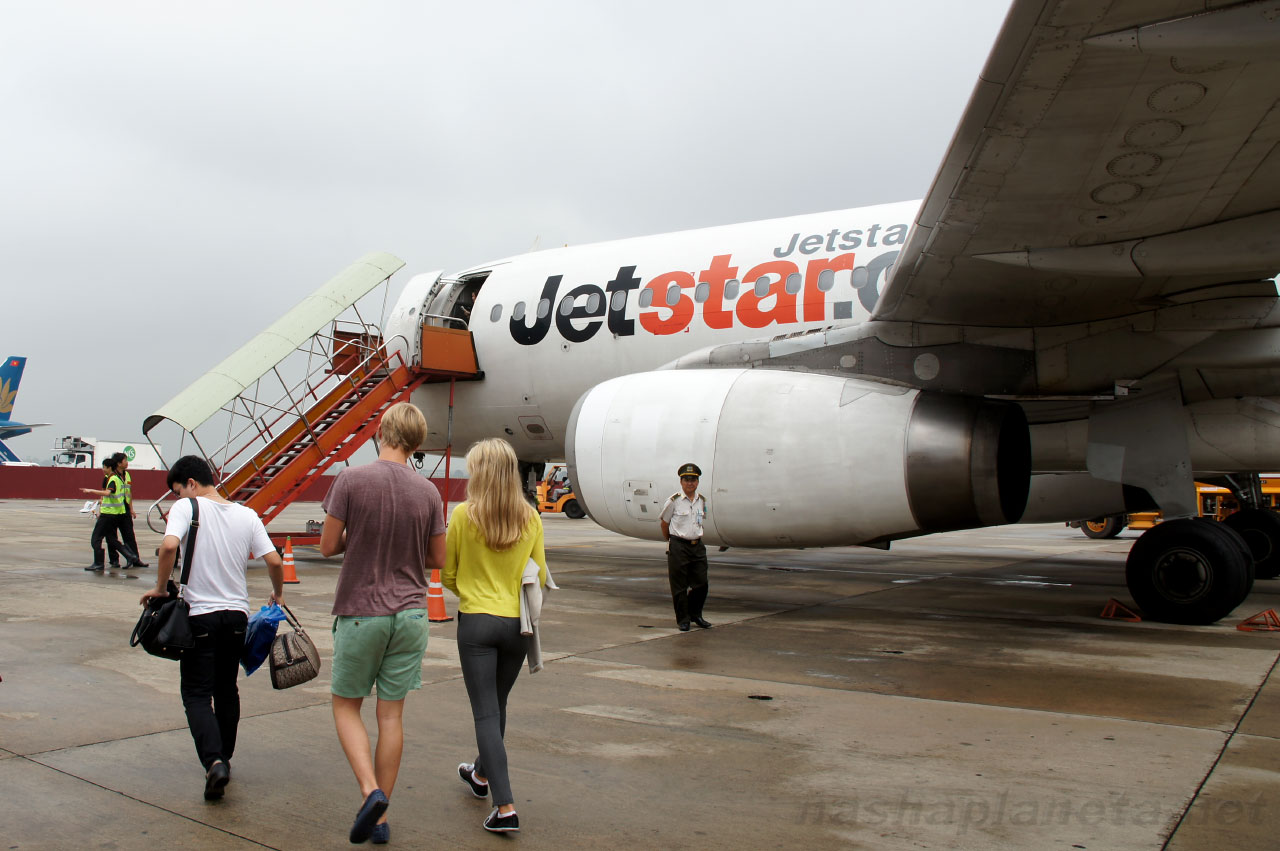 Near Hanoi is Noi Bai international airport, were flying many airlines, including direct flights from Russia (mostly from Moscow). Many tourists start their journey to Vietnam with the arrival in the airport. Direct flights to Hanoi from Russia perform Aeroflot and Vietnam airlines. But not always the shortest route to the plane may be the cheapest. Sometimes there are options very cheap flights with transfers.

The cheapest flights from Russia to Hanoi:

How to get from Hanoi airport Noi Bai to city

International airport Hanoi, Noi Bai is a relatively small airport, located 45 kilometres North of the city. To see the location of Hanoi airport you can on our interactive map of Hanoi.

Once at the airport you will not have problems with where to go and where to look for a taxi or a bus. The airport is small, and outputs of the airport go to one side, where you'll be able to find transport.

To Hanoi by bus

Pretty convenient way to move around Vietnam and Asia in General – trips to tourist or the so-called openbase (openbus).

In Hanoi a few long-distance bus stations, which receive and from where buses depart to different parts of the country and Asia. In order to use the bus, you do not have to look for these bus station. By purchasing a ticket at a local travel Agency, you can get a Shuttle from the hotel to the place of departure of the bus. Some tourist buses leave directly from the tourist area and you can walk to the place of departure from the hotel on foot.

If you arrive Hanoi by bus, you should know which bus station in Hanoi will be your final step to plan your travel in the city:

To Hanoi by train

The movement of the trains in Vietnam is quite convenient and comfortable. Railway connects all major cities of Vietnam.

In Hanoi there are two railway stations. One of them – Gia Lam – located in the North-East of Hanoi (Gia Lam Position on the map). According to information available to us, from this station operates daily trains in a single direction Nanning (China). This train is around 13 hours.

All other trains depart from the main station in Hanoi (Hanoi Main Train Station or Ga Ha Noi) which is located in the city center at 120 Le Duan. The position of the main railway station in Hanoi on the map. The station is very convenient, and to the Hoan Kiem lake (the tourist area) can be reached on foot in 20 minutes. From this station you can go: South to Ho Chi Minh (Saigon) following through all the major cities including hue, da Nang (Hoi An), Nha Trang; East of Haiphong (in Halong Bay); the North-Western Lao Cai (Sapa). From there you can take the train to Beijing (journey time less than two days).

Next to the tourist quarter of Hanoi there is another small station (or train stop) Ga Long Bien, where some trains leaving from the main station, make a stop. If the train you plan to go, make am stop, you can Board or get off the train there and almost immediately find yourself in the tourist district. But ray tickets 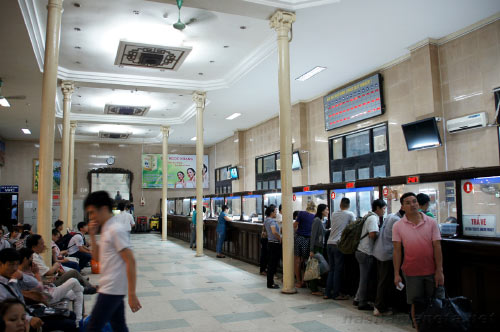 Buy train tickets in advance (at least several hours and it is the previous day) and better in the box office of the main station. Working cash register at Hanoi station from 7.30 to 12.30 and from 13.30 to 19.30. There has several offices and the electronic part (get the token and wait for your number), but it (the electronic part) is practically not observed. So just get a ticket and stand in the queue to the window. Another station in the hall of ardania have cash unclaimed tickets (Immediate tickets), where you can buy the tickets before sending, but it is as lucky. At the station in one of the Windows has staff that speaks English.

Tickets can be purchased at travel agencies, at the reception of hotels, ticketing offices in the city. However, the Agency can increase prices significantly. In addition, you may be the victim of a very popular fraud when you pay the agent for the expensive ticket, and really get the cheapest class. You're not going to deal with the seller for 10 minutes before departure of the train. You can still book and buy tickets online on the website http://www.vietnamtrains.com or http://www.vietnamrailways.netthe prices are quite high. But on these sites you can find the current schedule for the popular trains. There is still a great site http://www.saigonrailway.com.vn/ and http://www.vr.com.vnall the timetables, however in Vietnamese.

The schedule of buses and trains to Hanoi

Comments / recent posts on the topic on the forum
Re: General questions about Hanoiadmin 04 Jan 2015, 15:34
This is the same map that we have given the information about the transport of Hanoi. And 9 ka there is not. ...
Re: General questions about HanoiDiego 15 Mar 2016, 13:39
There you can take the bike everywhere. Ask at reception and they will tell you. ...
Re: General questions about Hanoiadmin 15 Mar 2016, 17:06
Around Hanoi on a Bicycle, IMHO, is comparable to suicide ...
Re: General questions about HanoiVictor 27 Mar 2016, 09:06
Hello!
Gonna fall in Vietnam. Planning to fly to Hanoi, take a 2 day tour to Halong Bay, a couple of days to spend in Hanoi and after somewhere on the sea.
In Hanoi are planning to fly in Sunday morning.
In this regard, there are a few questions:
1. Is it possible on Sunday in the city to change the currency or is it better to do it at the airport immediately after arrival?
2. Really Sunday in Hanoi to buy a tour to Halong Bay on Monday and Tuesday?
3. In the section on hotels in Vietnam read that when you check passports remain at the reception until check-out time. If leaving the hotel for 2 days in ha long Bay and spending the night there at the hotel, will you require in ha long passport to check in? If need be, how is this solved? Is it possible to get a passport during the tour administrators Hanoi hotel or the lack of a passport once decided by the organizers of the tour in hotel ha long?
4. I understand that the question that is now going to ask you a very individual, but if you can, please answer, at least approximately. Tell me how many Vietnamese Dong, roughly, it may be necessary for the first three days (one day in Hanoi + tour in Halong for 2 days)? If possible, call at least a "plug" from and to?

Thank you in advance! ...
Re: General questions about Hanoiadmin 27 Mar 2016, 09:33
1. currency actually change at any time, best to do it in jewelry stores on the street, Hang Bac, tested personal experience, see http://nashaplaneta.net/asia/vietnam/hanoi.html#useful
2. Really, especially if you arrive in the morning. If in doubt, you can order in advance on the website sinhcafe, but I wouldn't worry
3. An interesting question . In fact, the original passport is not required everywhere and take, sometimes the cost of a photocopy (although the law should be the original registration). I think this is a question the Agency resolved, so don't worry, just stock up on a photocopy. In General, why pay for two day just so the hotel, it is easier to be discharged, to book a room in two days, and leave things at them. So repeatedly done.
4. No problem. If at the minimum, to get from the airport on 17-m the bus (about 0.3$); on the cheap guestlist for two is$ 15; the tour is$ 50 for two. Plus eat, drink a beer and 15$ for two. A total of 80.3$, it is 1792560.99 at today's exchange rate, and if as wrote above, will not be for two more days the guest to take. Well, the upper limit is infinity . While there, in Vietnam at all desire a lot of money to spend does not work, this is not Russia ...
Re: General questions about Hanoi,Costanzia 28 Mar 2016, 13:38
Oh, and what is there to buy profitable?
And that delicious recommend to eat? ...
Re: General questions about HanoiVictor 29 Mar 2016, 17:46
Thank you very much for your detailed reply!
I forgot to ask one more question about Hanoi Sunday: do local agencies on Sunday - is it possible to buy a tour to Halong Bay that day. But, judging by Your response - you can. Right? ...
Re: General questions about Hanoiadmin 29 Mar 2016, 18:04
Why, forgot, question 2. Really, there is always work. ...
Re: General questions about HanoiVictor 05 Apr 2016, 17:10
Yes, sorry for the carelessness.
Thank you again! ...
Re: General questions about Hanoiegorbrel 08 May 2016, 15:41
Hello.
3. I advise you to take a picture of the passport that was not just xero-, and the electronic copy, which you can show from your phone\tablet.
If You are leaving from Hanoi, why pay to stay in another hotel?
4. We toured the Bay of Ha long 3 days\2 nights (01-02-03 may 3016). The first night on the ship, the second in a Bungalow on a small island in the Bay, where they themselves arrived on Cat BA and spent the night there too. Cost as much as a week in a very decent hotel in Hoi an.
Here Hoane met guys who from Hanoi came to the Cat BA and got a personal tour for the day. Them with Cat BA in the morning and took the evening brought. Paid three times less than we drove across the Bay so as not to overlap with other groups. In addition there was a personal guide and a kayak. In my opinion (after the fact) the night on the ship is absolutely a waste of time, and besides, you can have a front row seat to a very loud karaoke concert. ...
To reply or discuss the topic on the forum
And don't forget to share with your friends if information on a page you like:
The price of tickets
Hanoi from 20745R.▼Saigon from 21551R.▼Nha Trang from 20786R.▲Danang from 28930R.▼Phu Quoc island from 21130R.▲Hue from 37817R.▼Dalat from 35812R.▼Bangkok from 20240R.▼Phuket from 26055R.▼Samui from 38240R.▲K. Lumpur from 23967R.▼Langkawi from 29529R.▲Singapore from 26063R.▲Bali from 27953R.▲Goa from 25400R.▲Colombo from 27850R.▲
⌃
✖Календарь недорогих авиабилетов