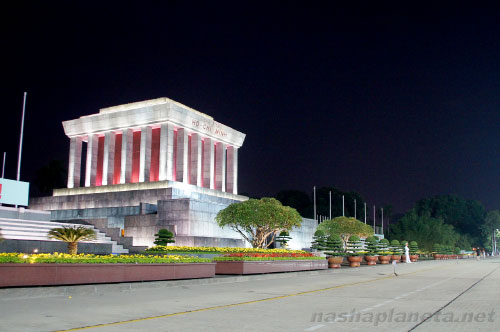 Hanoi (Hanoi) - is the place where are mixed old unhurried spirit of exotic Asia and business vanity modern. Crazy stream of countless motorcycles the river flows between ancient monuments, temples and memories of the recent history of Vietnam, and pedicabs carry passengers near the modern buildings of shopping centers. This is the place where you can spend hours wandering in circles around the same places, famous lake "Returned sword", and constantly see something new and new. Here you can feel absolutely safe and enjoy the incredible atmosphere of friendliness and the hospitality of the locals.

Hanoi – Vietnam's capital and second largest industrial center of the country (after Ho Chi Minh city). The name of Hanoi is literally translated as "the city among rivers" because the city is situated on the banks of the red river of the City. The population of Hanoi is 6 448 837 people, which is almost two times less than Moscow. The total area of Hanoi 3.3 million square kilometers, which is three times bigger than Moscow. Hanoi is among the 17 largest cities in the world and in the top ten the most attractive tourist cities in Asia.

In 2010 Hanoi celebrated its Millennium. The birthday was celebrated throughout the country. The occasion was felt even in the remotest corners of the country. Your current name city got only in 1831, from the day of founding in 1010 the city was named Thang long (meaning, city of the soaring dragon). Interestingly, in 1961-1962, the master plan of Hanoi was developed under the leadership of the Soviet architect Igor Alferov.

The city is located on the North (Hanoi interactive map of Vietnam), and visited by tourists all year round. For many tourists, Hanoi is the starting point for travelling in Vietnam or Asia: not far from the capital is world famous for its spectacular scenery of Halong Bay (Ha Long), hence the travelers go to the mountain town of Sapa (Sapa) or continue across Asia in Laos and Thailand. 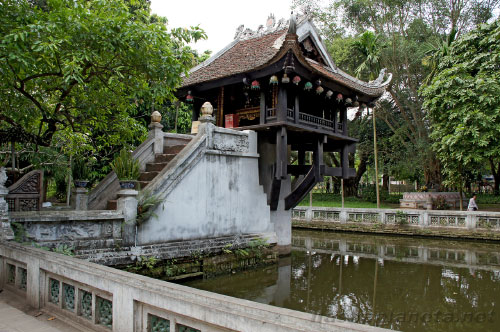 The temple of literature
View photos in 3D

A beach holiday in Hanoi is not very. For a beach vacation you need to go to the coast, in the resort town of Vietnam, and Hanoi is about the nearest ocean beaches 100 miles. But Hanoi is a very interesting tour for a sightseeing holiday. The city has a rich history and it is full of historical, cultural, architectural and religious attractions. Here is preserved as monuments that tell the history of the city and state from the beginning of his education, and heralds the modern history of the 20th century, such as the Lenin monument and the mausoleum of Ho Chi Minh city, which is with love called "uncle Ho". The city has some very important and interesting museums. Like almost everywhere in Buddhist Asia, the city is scattered with temples, pagodas and other active religious sites.

The atmosphere of the city is very attractive, incredibly friendly, and many travelers fall in love at first sight. The city and its people are really very friendly, you can feel completely safe at any time of the day.

Life in Hanoi, despite the fact that it is the capital and very large cities, unhurried and quiet (except for traffic). Perhaps this is due to the fact that the population density of the city is not high. High-rise buildings in the city, except for a few hotels, almost no. Sometimes, walking around the city and looking around, you can forget that it is the capital, and to think that this is a small provincial town. 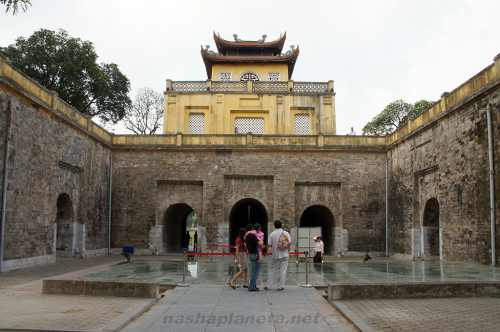 Basic tourist infrastructure in the city are full of hotels of various prices and categories, a huge amount; for shopping opportunities abound in the form of shopping centers and local markets; restaurants and cafes at every step. Well, the excellent system of public transport and abundance of inexpensive taxis make it easy to get around. Nightlife in the city are under-represented. At night almost the whole town is sleeping and the streets don't even have transport. Because Hanoi can be called the cultural capital, hence, the relevant evening entertainment: walking around Hoan Kiem lake or old quarter; Opera; theatre of water puppet; and, of course, a variety of restaurants and cafes. Meet and discos, but their visitors are mostly local youth, travelers are there to meet.

To stay in Hanoi for a long period not necessarily. Two or three days to see the sights, watch a puppet theater on the water and walk through the most interesting parks would be enough. Usually it is in the form presented in Hanoi sightseeing package tours. But there are also longer tours with the stay in Hanoi, including trips to Halong Bay, Sapa and even Vietnam. To find and pick up tours in Hanoi online.

Well, if you are preparing for an independent trip to Vietnam and particularly in Hanoi, we can make available on the website the following information about Hanoi:

On the forum about Hanoi can ask questions or share their impressions.

Weather in Hanoi is very rarely bad. The climate here is subtropical, and therefore the tourists are comfortable in any time of the year.

In the hot summer of Hanoi is characterized by very high humidity and rain. At this time, from may to September of the rainy season. The average summer temperature is 30C. If you are planning to travel around Hanoi at this time, care should be taken to protect against mosquitoes and other insects because the moist and warm environment provides excellent conditions for their reproduction, and their numbers greatly increased. But the summer months because of the heat and rains are the low tourist season, and prices are at this time reduced.

The high tourist season in Hanoi lasts from September to April. Visiting Hanoi in autumn (especially in September - October) and spring (February-April) is the perfect time: the humidity and amount of rainfall decreases and the temperature is not yet time to fall. This is a great time to visit Halong Bay or Sapa for the same reasons – high temperature and low humidity.

Winter is not a contraindication to visit Hanoi, but you should be prepared for the fact that at night the temperature can drop to 12 degrees Celsius. Low temperature is compounded by the fact that buildings in Vietnam, as a rule, do not have heating systems, and at night you can freeze. In the daytime temperature never drops below 20C.

Seasons in Hanoi by months*

Current weather in Hanoi and forecast

The time in Hanoi

In summer and in winter time in Hanoi ahead of Moscow is +4 hours.

We will be happy to place your review on trip around Hanoi. How to post a review?

Before the trip, don't forget

Comments / recent posts on the topic on the forum
Re: General questions about Hanoiadmin 4 November, 2015
This is the same map that we have given the information about the transport of Hanoi. And 9 ka there is not. ...
Re: General questions about HanoiDiego March 15, 2016
There you can take the bike everywhere. Ask at reception and they will tell you. ...
Re: General questions about Hanoiadmin March 15, 2016
Around Hanoi on a Bicycle, IMHO, is comparable to suicide :suicide ...
Re: General questions about HanoiVictor 27 March, 2016
Hello! Gonna fall in Vietnam. Planning to fly to Hanoi, take a 2 day tour to Halong Bay, a couple of days to spend in Hanoi and after somewhere on the sea. In Hanoi are planning to fly in Sunday morning. In this regard, there are a few issues: 1. Is it possible on Sunday in the city to change the currency or is it better to do it at the airport immediately after arrival? 2. Really Sunday in Hanoi to buy a tour to Halong Bay on Monday and Tuesday? 3. In the section on hotels in Vietnam read that when you check passports remain at the reception until check-out time. If leaving the hotel for 2 days in ha long Bay and spending the night there at the hotel, will you require in ha long passport to check in? If need be, how is this solved? Is it possible to get a passport during the tour administrators Hanoi hotel or the lack of a passport once decided by the organizers of the tour in hotel ha long? 4. I understand that the question that is now going to ask you a very individual, but if you can, please answer, at least approximately. Tell me how many Vietnamese Dong, roughly, it may be necessary for the first three days (one day in Hanoi + tour in Halong for 2 days)? If possible, call at least a "plug" from and to? Thank you in advance! ...
Re: General questions about Hanoiadmin 27 March, 2016
1. currency actually change at any time, best to do it in jewelry stores on the street, Hang Bac, tested personal experience, see http://nashaplaneta.net/asia/vietnam/hanoi.html#useful 2. Really, especially if you arrive in the morning. If in doubt, you can order in advance on the website sinhcafe, but I wouldn't worry 3. Interesting question :-). In fact, the original passport is not required everywhere and take, sometimes the cost of a photocopy (although the law should be the original registration). I think this is a question the Agency resolved, so don't worry, just stock up on a photocopy. In General, why pay for two day just so the hotel, it is easier to be discharged, to book a room in two days, and leave things at them. So repeatedly done. 4. No problem. If at the minimum, to get from the airport on 17-m the bus (about 0.3$); on the cheap guestlist for two is$ 15; the tour is$ 50 for two. Plus eat, drink a beer and 15$ for two. A total of 80.3$, it is 1792560.99 at today's exchange rate, and if as wrote above, will not be for two more days the guest to take. Well, the upper limit is infinity ;) . While there, in Vietnam at all desire a lot of money to spend does not work, this is not Russia :lol: ...
Re: General questions about Hanoi,Costanzia 28 March, 2016
Oh, and what is there to buy profitable? And that delicious recommend to eat? ...
Re: General questions about HanoiVictor 29 March, 2016
Thank you very much for your detailed reply! I forgot to ask one more question about Hanoi Sunday: do local agencies on Sunday - is it possible to buy a tour to Halong Bay that day. But, judging by Your response - you can. Right? ...
Re: General questions about Hanoiadmin March 29, 2016
Why, forgot, question 2. Really, there is always work. ...
Re: General questions about HanoiVictor 5 April 2016
Yes, sorry for the carelessness. Thank you again! ...
Re: General questions about Hanoiegorbrel May 8, 2016
Hello. 3. I advise you to take a picture of the passport that was not just xero-, and the electronic copy, which you can show from your phone\tablet. If You are leaving from Hanoi, why pay to stay in another hotel? 4. We toured the Bay of Ha long 3 days\2 nights (01-02-03 may 3016). The first night on the ship, the second in a Bungalow on a small island in the Bay, where they themselves arrived on Cat BA and spent the night there too. Cost as much as a week in a very decent hotel in Hoi an. Here Hoane met guys who from Hanoi came to the Cat BA and got a personal tour for the day. Them with Cat BA in the morning and took the evening brought. Paid three times less than we drove across the Bay so as not to overlap with other groups. In addition there was a personal guide and a kayak. In my opinion (after the fact) the night on the ship is absolutely a waste of time, and besides, you can have a front row seat to a very loud karaoke concert. ...
To reply or discuss the topic on the forum
Rate the article: (7 votes, rating: 4.9 out of 5)
Left to write of characters: 50
⌃
✖Календарь недорогих авиабилетов