The temple of literature in Hanoi 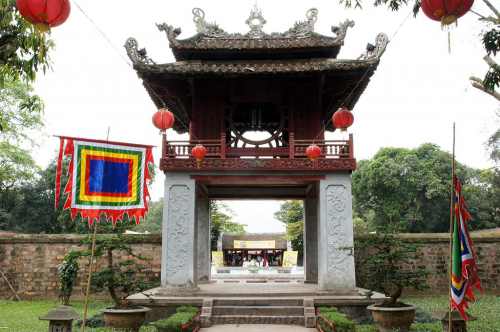 The temple of literature
View photos in 3D

One of the sites in Hanoiwhich must be visited in the first place, is the Temple of Literature (Van Mieu). It would not be fair to say that you'll see buildings and statues of incredible beauty, but the historical importance of this place makes it a very interesting place to explore the history of the capital and of Vietnam in General. Local students love this place and spend the festive events on the occasion of the graduation exams. And you can see the Temple of literature banknote 10,000 VND.

If you go to the Temple on the eve of the Vietnamese new year of Tet, you can see here a "competition" calligraphers who paint their wishes in hieroglyphics in the language of the Han-Nom.

Temple of literature (Van Mieu) was built in 1070 by Emperor Li Nhan Tong (Lý Nhân Tông) in honor of Confucius and his followers, and six years after that on its basis was organized the first Vietnamese University. There are preserved historical monuments thousands of years of civilization, among them the statues of Confucius and his disciples, as well as ancient buildings such as pavilion hue van and Cult Room. The University was established here for the education of children of high-ranking mandarins (officials).

In 1484, Emperor Le Thanh Tong ordered to establish the temple of the stele, which began to record the names, place of birth and achievements of people who have received a doctoral degree in the exams, held every three years since 1442 Although between 1442 and 1778 the years there have been 116 exams, however, when the practice of entering names on stelae ceased, the temple was only 82 stelae. These stelae are now in the temple are the stone slabs on the backs of turtles. In 2010, they were recognized as UNESCO world documentary heritage.

In 1802 Emperor Gia long transferred the national University to his new capital of hue, and the temple remained in Hanoi almost in the same form, as you can see today.

Temple of literature (van Mieu Quoc Tu Giam) is definitely one of the most famous attractions of Hanoi and is a must to visit.

💵 Entrance fee / ticket price: 30,000 VND (the currency of Vietnam, the exchange rate), children up to 15 years inclusive - free of charge.

🚶 How to get there: located on the street, Quoc Tu Giam St, 2 km to the West of sword lake and South of the Ho Chi Minh mausoleum, Ho Chi Minh city (the Temple of Literature on the map). The temple entrance and ticket office on the South side.

Photo Of Temple Of Literature (Hanoi)

Click on the link "View photos in 3D" under images and put on the special red-blue glasses (anaglyph) to see pictures of Hanoi in 3D.

Panorama of temple of literature

Comments / recent posts on the topic on the forum
What to see in Hanoi? Attractions Hanoiadmin June 15, 2011
About the attractions of Hanoi here
The temple of Literature in Hanoi + 3D-photo gallery of the temple
The lake of the returned sword in Hanoi + 3D-photo gallery lake
Vietnamese women's Museum + 3D photo gallery Museum
The Bach MA temple + 3D photo
In this topic, ask questions about the attractions of Hanoi and what to see. ...
Re: What to see in Hanoi? The Sights Of HanoiKira 22 Nov, 2014
The city is rich in sights, both architectural and natural. Personally I remember Sapa Cathedral - the Cathedral, in its exterior design, similar to Notrе-Dame de Paris. ...
Re: What to see in Hanoi? Attractions Hanoiadmin 22 November, 2014

Good advice. Actually, IMHO, this is one of the best places for an evening stroll in Hanoi, especially if you're staying in the tourist area North of the lake. It is not fussy same streets they walk, it is best to the lake. I always do when I go there. ...
Re: What to see in Hanoi? The Sights Of HanoiPaZan 25 December, 2016
I advise you to visit Vietnam Museum of Ethnology. Very interesting and allows you to get acquainted with their culture and ethnic groups. ...
To reply or discuss the topic on the forum
CONNECT
⌃
✖Календарь недорогих авиабилетов