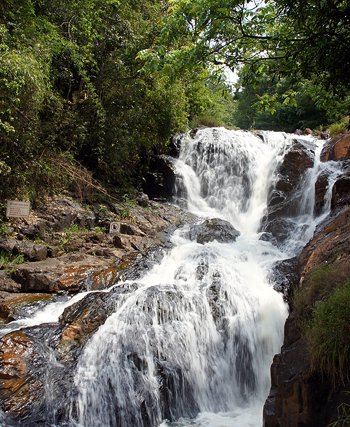 Despite not sounding the name, datanla (Datanla) - though it is modest, but it is a beautiful waterfall with several cascades with a total length of 350 meters. Here can be nice to take pictures, walk around in the jungle (be careful around the sheer cliffs), and, of course, to sit in a cafe or buy Souvenirs in the shops. On a visit to the falls will take about half an hour. Imported large quantities of a tour group of Russians with other resorts in Vietnam.

Very interesting way of moving and descent to the waterfall: at the foot of the waterfall going up and down in a single or double strollers on like a roller coaster. Moreover, the rate of descent you regulate yourself using the brake handle. However, for such a descent and ascent will have to pay an additional 40,000 Dong for the entrance ticket. If you do not want to overpay, you can go on foot. Foot descent and ascent are not that tedious, they will take an additional 10-15 minutes. At ticket offices organized a free Parking space.

🚶 How to get there: the Waterfall is located about 6 kilometers from the center of Dalat to the North (see the position of the waterfall Debate on a map of da lat). To get here it's best to rent transport or taxi. Can also be reached on foot from the bus station of da lat (3km) or get there by bus. Many excursions in Dalat include a visit to the falls.

Comments / recent posts on the topic on the forum
Forum on the latadmin February 15, 2014
The site provides information about da lat:
Tourist information about Dalat
How to get to Dalat
Hotels of da lat, where to choose a hotel which area
Attractions In Dalat
Attractions in the vicinity of Dalat
Photos Of Da Lat
The Map Of Da Lat
In the topic ask and answer questions to Dalat. ...
Re: Forum on latloginza2325 26 February, 2014
I went to Dalat from Ho Chi Minh city, on the night bus. The ticket price is really funny, plus save on one night. However the bus arrived in Dalat at 6am, at this time there it was still dark and very cold. ...
Re: Forum on latby Dmitri On 22 April, 2014
Well, it's very pretty gardens. Visited the Crimea in the Botanical admired, and are generally no words...how beautiful. ...
Re: Forum on latSAMESAME 29 September, 2014
Was in the lat 6 days. Just an amazing place! Not hot, people are much kinder and very beautiful. To leave did not want. I drove around Dalat on a rented moped - save on fun! Who doubts to go or not, my answer is YES,Yes and YES AGAIN!! ...
Re: Forum da latadmin 29 September, 2014

I agree with you, da lat definitely YES. What is bad, our tourists come to Dalat with sightseeing for the day, is good if two, and almost did not have time to see the thunder the most high-profile attractions such crazy house, waterfalls and flower gardens Debate. But there is so much more. The weather, by the way, fell a couple of times in the rain and was terribly cold, especially on a bike, when blowing through the fresh wind. So tight clothes will not be superfluous. ...
Re: Forum of the latPhilip 30 Nov, 2014
Went today(November) at elephant waterfall, on the way decided to stop at the waterfalls Kam-Lin in the crazy house, and so, they(Kam-Ling and crazy) do not work on Saturday and Sunday. ...
Re: Forum da latadmin on 30 Nov, 2014

It's very strange, I hope you do checked, but didn't believe the guide or "well-wishers", which usually want you to get to interesting places like factories and shops. Waterfall Cam Ly at all at any time to get, even when they are closed, via at least two wickets. And here is the schedule on the official website of Crazy House: Commencing from December 01, 2014 Crazy House is open for visitors from 8:30 AM to 7:00 PM daily (including Saturday, Sunday, Holidays). ...
Re: Forum of the latPhilip 1 Dec, 2014
Yes have checked. Drive yourself on a motorbike, without guides and tours. Went to crazy house, the guard was shown on the schedule near the closed Fund. Saturday and sun. output. Other sites had no such problems. And all thanks to your resource all rides and reviews of attractions planned on the basis of information provided here. ...
Re: Forum da latadmin 1 December, 2014