All beach resorts in Vietnam 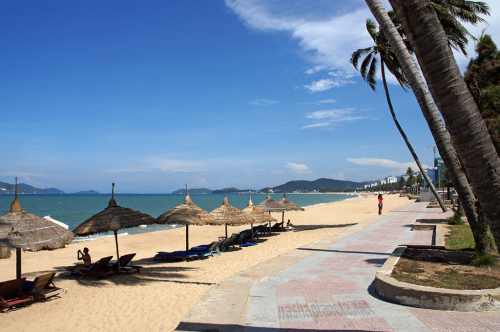 The city of Nha Trang on the southern coast of Vietnam, is definitely the most popular beach resort. But he owes his popularity not the ideal beaches in the style of "bounty", and combined in one place, decent beaches, a huge amount of experience a number of attractions and opportunities for shopping.

Some tourists today disparagingly compare Nha Trang and Sochi (though in Sochi, if objectively, nothing wrong with that). And indeed, his "Russification" today beats all conceivable limits: almost every second counter tourists are English speaking, signs and even road signs are duplicated in Russian. 4-5 years ago Russian speech here was rare, and the huge influx of Russians contributed, among other things, the opening of direct non-stop flights and its active development of major operators. But before the influx of Russian resort was the most visited in the country.

So this is a fairly large and developed city on the coast. It has its tourist area, where all the necessary infrastructure and entertainment. The prices here are very affordable, starting from $ 20 for a double room in excellent condition. In "five" you can stay for $ 100 and above. There is a well equipped waterfront with playgrounds and Jogging trails, as it is a great place to stroll in the evenings. Of entertainment too, everything is present, but the scale is certainly not "Pattaya".

As for beaches, we got some here. The most accessible is the city beach. It is quite clean, equipped and very long. However, it runs along the coast and is separated from urban areas noisy highway. In General, for those seeking tranquility and privacy, and perfectly clear water, the beach will not cause delight. But for unpretentious, looking for in one place the beach and all amenities, it fit perfectly. At a respectful distance to the North and South of Nha Trang (will have to go by taxi or rented transport) there are several beaches that can already claim the title of "bounty" a stretch. In addition, in the waters of Nha Trang has some great beaches on the Islands.

In conclusion we say that Nha Trang is the best choice for those who come to Vietnam not only to retire on the beaches, but also to have some fun, see the sights, go shopping. If you are more important than clean beaches and the opportunity to go diving or Snorkelling – choose another resort.

Until recently, the resort area of MUI ne near Phan Thiet city was the most popular place, while the palm is not selected Nha Trang.

MUI ne – almost the exact opposite Nha Trang. This is a fairly quiet resort area, which stretches for 10 miles along the coast. In addition to hotels and basic infrastructure for tourists there is nothing here, and the ne, by and large, like a village. Who really want to have some fun, can you find a fun place, but very few of them, and night life in recent years shows a tendency to fading.

In principle, the fact that the ne looks like a village, it should not stop anyone. Here is everything you need for a normal beach holiday. Perhaps what is not really going to get a certain category of tourists shopping. But a 20-minute drive from the resort is Phan Thiet, where there are a couple of major shopping centres and a few markets.

The beach in MUI ne, the beauty and purity do not Shine, and do with it anything, as they are not wikiway. Unfortunately the weather conditions here are such that most of the year with the sea wind and waves are formed, which brought her to the shore debris and muddy water. For the same reason any normal diving or snorkeling. But for those who like to jump on the waves – here expanse: the beaches of MUI ne, a large number of schools kiting and surfing, and nature has created excellent conditions for this.

The variety of attractions of MUI ne does not Shine. Usually visit the ancient Cham towers, the mountain with reclining Buddha, white and red sand dunes. The only salvation for fans to see something interesting to buy a tour to the more remote places of Vietnam or neighboring Cambodia or Laos. 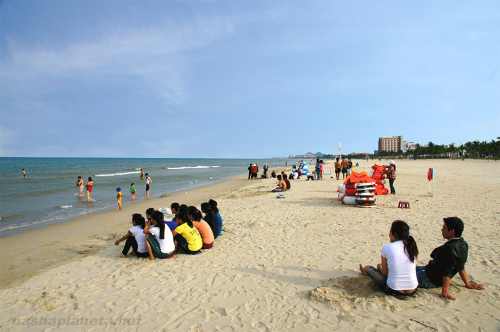 The beach in da Nang

Major da Nang city in Central Vietnam so far is not very popular resort among tourists from European countries, but the Vietnamese and the Chinese is one of the favorite places of rest.

For some strange we (the authors) due in 2005 by Forbes magazine beaches of da Nang was recognized as one of the most attractive in the world. The beaches in da Nang is really very long, wide and very desolate, but in our opinion, to call them today among the best it is possible only with the big stretch. After all-it is a major commercial and port city with related contaminants in water, and nagivating coastline, mostly representing the construction site. Perhaps, after the construction of the coast to be transformed and become very developed and beautiful resort area, but natural attractiveness with palm trees stretching to the water, it will not be as don t now.

The da Nang are very spacious and large, with wide roads. Here is everything you need for relaxation, but a separate tourist area yet. Attractions in da Nang, with the exception of the Museum and the marble mountains, not at all. Some interesting places are outside the city and quite far from it (this is the ancient capital of hue, the Hai van pass, Hoi an, the my son ruins). There is entertainment, but mostly focused on local tourists and Chinese. European tourists are very few, although the situation is changing every year.

I can advise to select da Nang for those who want to see new, as yet untapped by other Europeans, or if you want to relax away from compatriots. Other advantages of a beach holiday in da Nang we have found. 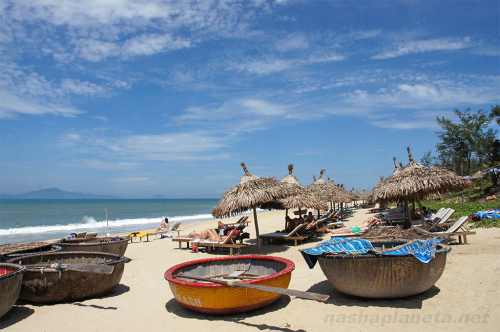 An Bang Beach, Hoi An

Small city Hoi an is only a half hour drive from da Nang, and unlike his older brother is much more popular among the European tourists, especially Russian speakers in recent years. Most of the tourists from Russia visited Hoi an tour for a few days from Nha Trang or Phan Thiet.

Hoi an is better known as a tourist destination, but the beaches here, and good. A very pleasant town, a UNESCO world heritage site and fans to see something interesting and historical'll like it here. But best of all, walking through the ancient streets with a visit to the centuries-old ancestral houses and museums can be combined with a beach holiday.

The beaches in Hoi an are of decent quality, there is even the opportunity to go diving on one of the nearby Islands. But the bad thing is that the beaches are a few miles away from the city centre. That is, the selection of the places for a hotel in Hoi an will have to choose: either to be closer to the beach but far from the center, or settle in the centre and to the beach to get a taxi or rented transport. If you choose a hotel on the beach, keep in mind that outside in the evenings you will do nothing, and walks will have to go only to the city.

Attractions in Hoi an more than enough, besides you can go on excursions to the ruins of my son, marble mountains, the ancient capital of hue, etc.

Phu Quoc island is located in the South of Vietnam and is the largest Vietnamese island. Its length is about 45 kilometers.

Phu Quoc island can be considered a benchmark of the most beautiful beaches in Vietnam. When and where to go in search of the perfect secluded beach in Vietnam, here. And here is one of the best diving in Vietnam.

Infrastructure Fukuoka is quite developed, there are even conventional tourist area (actually, almost the whole city). But in General the island is still quiet and undeveloped. A considerable part of Fukuoka is a jungle, here you can still see abundant wildlife.

Noisy entertainment here is not very much, however despite this active tourists will do. Trekking Hiking in the jungle or riding a rented transport at the perimeter of the island in search of the best beach compensate for the lack of a large number of Nightclubs and bars.

The Island Of Con Dao

In Vietnam there are not too many undiscovered wild places. One of these is conventionally Con Dao island. Yet it is still seldom visited by tourists. The hand that plays the inaccessibility of Islands and poor infrastructure. But if you want to be in a quiet peaceful Paradise far from civilization, Con Dao is a great option. However, Con Dao is now very actively developed and built up, so you should hurry.

The island is located in the South of the country 100 miles from shore, and you can get there by small plane. It is small, just over 12 kilometres in length, and is scattered around many small Islands of the archipelago. The beaches here are great, but a lot more are attracted by the opportunity to go diving or snorkeling, which is one of the best. Attractions besides the natural beauty, here is no.

In General, Con Dao is very good, but if you are doing serious diving or are not a fan of snorkeling, strive certainly get here for the whole period of rest, you then will be really boring.

Halong Bay is known primarily as an excursion destination and one of the new wonders of the world. But if you have nowhere to put the time, can stay for some time on Cat BA island in the Bay. But spending on the island your entire stay, we would not be too recommended.

The island is the only more developed beach resort in the North of the country. It seems that the infrastructure is there, and some entertainment in the form of jungle trekking, climbing, tours of the many interesting Islands, but in General our feelings away – the monotony and boredom. Perhaps your impressions of the Islands will not coincide with ours, so if you are in the North of the country and want to visit the beach – the Wellcome Cat BA. 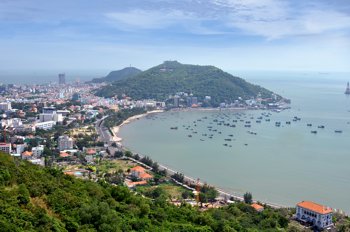 Major Vung Tau in the South, 125 kilometres from Ho Chi Minh city can not boast of outstanding beaches. It is an industrial town famous for the production of oil. European tourists here quite a bit, because here is nothing special to do.

If you are primarily interested in a beach holiday, in the direction of Vung Tau is not worth to watch. Honestly, we didn't find any reason to recommend Vung Tau for a beach holiday, it is better to choose the ne just a hundred kilometers away. Although, there is one reason: if you stayed in Ho Chi Minh city, a day or two to go to Vung Tau to swim and see a few sights. For the entire period of stay in Vietnam Vung Tau, we would not recommend steel.