How and what to get to Phuket?

Phuket is the most accessible island resort in Thailand. Here are direct flights not only from the capital of the Russian Federation and regions of Russia with the seasons. If you are traveling to Thailand and wish to get to Phuket from other cities in the country, it is easy to do, the choice of transport is great. Which is good, Phuket is connected to the mainland by a bridge, and you do not have to arrive on his boat, because all the vehicles arrives over the bridge. Below about all the ways to get to Phuket. Also read the information:

Phuket international airport is the second largest in Thailand after Bangkok airport Suvarnabhumi. Located on the North of the island (airport on a map of Phuket).Here comes a large number of regular flights from Asia, Europe, and Australia. From Russia to Phuket, you can get direct flights in high season (November to April), and not only from Moscow but from the regions. You can also fly to Phuket with a stopover in Bangkok and airports of other countries.

Check out the prices on cheap flights from Russia to Phuket:

How to get to/from Phuket airport

By water ferries run regularly to and from nearby popular resorts in the province of Krabi (Krabi), the Phi Phi island (Ko Phi Phi), Koh Lanta (Ko Lanta), Lipe (Ko Lipe), the island of Langkawi in Malaysia.

Ferries depart/arrive on Phuket to the pier Rassada Port in Phuket town (Rassada pier on the map). The pier is easiest to reach by taxi. If you want cheaper, can be reached by local bus from your beach to the bus station in Phuket town to find a taxi or take the local bus No. 3 to port. You can also purchase a ferry ticket with Shuttle service to the pier in a travel Agency.

The cost of a ticket to Phi Phi island is 420 baht. To Krabi town (with a stopover at Phi Phi island) from 690 baht. The ferry takes about two hours.

Indicative timetable of the ferries (changed by seasons):

A more accurate schedule can be find on sites: 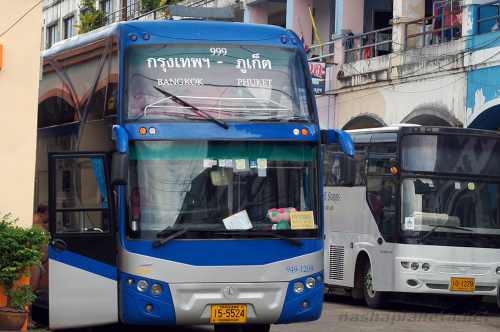 Phuket is connected to the mainland by two bridges, so you can reach it by land transport is possible.

By bus to Phuket can be reached from most major cities: Bangkok, Pattaya, hat Yai (Hat Yai), Krabi, Ranong (Ranong), Hua hin , etc. long-distance buses arrive at the new bus terminal (Bus terminal-2) near Phuket town. From there to the resorts can be reached by taxi (400 - 800 baht); right there to rent a motorcycle during your vacation (from 200 baht per day); links with transfers to local buses. To do this you must first drive to the old bus terminal by taxi for 10 baht (departs every 30 minutes) and change there to a bus or taxi already to the desired beach.

The most popular bus route from Bangkok to Phuket departs from the North bus terminal of Bangkok. The cost of the trip and the schedule in the table below.

Many private companies also carry tourist traffic to Phuket with the popular routes, but we traditionally recommend you to use regular buses.

Phuket is no railway, but you can get there with a train possible. The nearest railway station of the railway Bangkok-Singapore is near the city of Surat Thani (Surat Thani) on the mainland. It can be reached by train from Bangkok, Hua hin, Chumphon, from Bachellors near the island of Penang in Malaysiaand with a change of trains from Kuala Lumpur (Malaysia) and Singapore. The fare in trains is low, and the quality of the trains is excellent.

Daily from the railway station Bangkok Hualamphong here goes 11 trains. Travel time by train 8 to 12 hours depending on the train type. The fare is 600 (seats) up to 1,500 (reclining seats) baht. Read more about trains in Thailand here

The schedule of buses and ferries to Phuket

Yes, but they have the warm rains, passed quickly and Sunny. But prices during this period, much cheaper. In a very nice hotel to relax for a little money. ...
To reply or discuss the topic on the forum
CONNECT
⌃
✖Календарь недорогих авиабилетов