Transport Phuket, than to move on

Phuket is quite a large island, its length more than 50 kilometers, and the length of the road on the perimeter of the island is more than 120 kilometers. Public transport is poorly developed, and, most likely, you will have to use for the movement of "tourist transportation" in the form of taxi, tuk-tuk, rent a motorbike or a car. 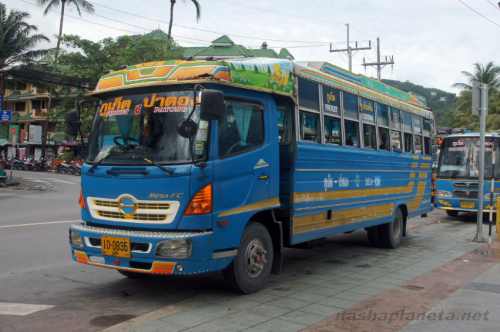 Public transport in Phuket, are presented in the form of buses and taxis (Songthaew), and not very easy to move. The fact that all bus routes are organized in the form of a star end on the old bus station in Phuket town (see the Phuket bus station) and Parking taxis in the city centre along the Ranong Road (see Parking map). In the end, to get from one beach to another, even if they are nearby, have to go to Phuket town and then transfer to another bus to your destination. Similarly with the airport and Phuket: first there need to get the airport bus to the old bus terminal for 100 baht (see schedule), and then to go to the beach.

The routes operate large buses and the small Songthaew (do not confuse them with the tuk-tuks) from remade under the bus small truck with two benches. The price per trip ranges from 10 to 35 baht on different routes. No stopping points, except the final does not exist, and stops for alighting and boarding produced on demand. Ie you can stand along the road which goes right route, at any place and stop the bus. Buses run approximately 30-minute intervals until 18:00 hours.

The main routes and the value of (baht): 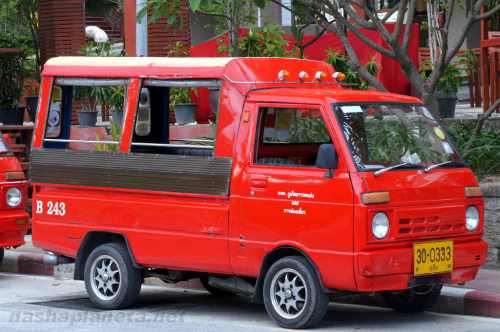 Taxis on the island are quite expensive compared to Bangkok, and a trip to the same distance as in Bangkok, Phuket will have to pay more in 2-3 times.

Conventional branded taxi is presented in the form of taxi meter (taxi meter) and its very easy to get a taxi-meter and the checkered roof. This is the best way and the cheapest of all types of taxi. But, unfortunately, official taxis on the island in a deficit. Before the trip, don't forget to ask the driver to turn the meter on, otherwise at the end of the trip, he will tell you its a fixed price.

Also the island has many private taxi drivers on the machines, which, although trying to look the same as the official taxis are not equipped with meters. Drive them at a fixed price costing slightly more expensive than the official taxi. Be sure to negotiate the price in advance.

Motorcycle taxi in Phuket are quite common and very cheap, but more dangerous than car taxis. Always wear a helmet.

Tuk tuks in Phuket even more than a regular taxi. Tuk-tuks don't run on specified routes and operate like a taxi. They represent a very small Songthaew, i.e. modified for the transportation of people cars-trucks. Most often they're red (see photo), and sometimes yellow. Wherever you throw a glance in the tourist areas of Phuket, you will see everywhere have been waiting for you a tuk-tuk.

Cheap and comfortable ride on the Phuket tuk-tuks will not name, but if you are some people (but usually more than six in a tuk-tuk will not fit), there is a chance to save. A short trip in the city will cost from 50 baht to the city from Patong could get it for 400 baht. Be sure to negotiate the fare before you travel, otherwise you will be named an exorbitant price. And before you travel you should definitely bargain, because you still will be named too high a price. 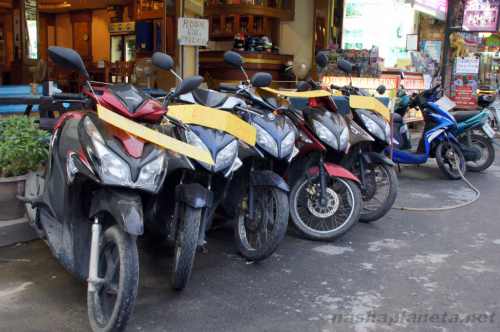 Rent a motorbike in Phuket

This is a convenient and the most economical way to travel around the island. But before you decide on driving yourself around the island, you should be aware that local drivers drive so as I can, but not as much as expected. Almost no one does not comply with local traffic regulations, and all this is compounded by the difficult terrain of the island, poor signs and poor visibility. Every year on the roads of Phuket more than 250 people die from more than 10,000 injured in the accident. Every nine out of ten accidents involving motorcycles. Also, there are cases of "road showdown" between drivers, do not share the road, including shooting and deaths. So do not rush immediately to rent the car or motorcycle, but first a closer look on how go local, and only then make the decision to rent or not.

Rent a motorcycle (scooter) will cost 150 baht per day. When renting for a long period of time make discount. For rent it is sometimes necessary to show the passport and to leave a Deposit (about 1000 baht) or credit card more often asked to leave as a Deposit the passport. Right in the car with you, do not ask, although theoretically they should be, and that category "A". For driving without a license, you face a fine of 500 baht. Always wear a helmet, including passengers, then you are unlikely to have problems with the police. Recently in Phuket order on the roads tightened and often the police conduct a RAID and catch everyone who goes without a helmet and without a license. So do not neglect it.

Find rentals on every step in the tourist areas. New intercity bus station in Phuket town also have rent a motorbike for 200 baht per day so that you can immediately on arrival at the island by bus, sit on the bike and go to your beach.

To rent a car necessarily need an international driving permit (IDP). Is such a law, made in the form of booklets in several languages that are issued in addition to the regular national rights of the bodies of the traffic police. They act only when presented together with your national (domestic) rights, so don't forget to take with you on a trip. To get an IDP is not required to write any exams, you only need to pay a fee. Order them easiest website public services.of the Russian Federation, the value of discount will be 1120 rubles. You can contact the traffic police or the MFC personally, but then the IDP will cost 1600 rubles (price 2018). To pick up right after their manufacture in the traffic police or in the MFC. Details about car rent in Thailand read here.

The cost of renting a car in Thailand starts from 600 baht when booking for a few days. Can find and book car rentals using the search form and compare prices from different distributors:

Yes, but they have the warm rains, passed quickly and Sunny. But prices during this period, much cheaper. In a very nice hotel to relax for a little money. ...
To reply or discuss the topic on the forum
CONNECT
⌃
✖Календарь недорогих авиабилетов