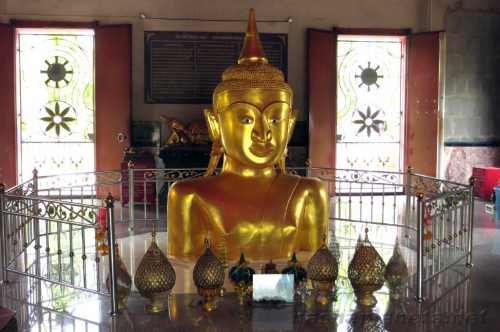 The famous temple of the Golden Buddha statue called Luang Poh Phra Thong, which is made up of the half torso with a head. In our opinion it would be possible to call this statue the bust, and a very impressive size. The legend of this place says that once a boy with a Buffalo plowing a field and accidentally touched the ground in plow for a pillar (statue of a boy and Buffalo you can see in the temple). Then he got sick and died together with the animal. Unfortunately my father went to the field and tried to pull the offending post, but it didn't work out. Then he called the whole village, but even all the men of the village are unable to dig up the post but found that this statue, which they managed to dig up half. After a few years the Burmese soldiers who came to conquer the Siamese land, tried to dig up the statue to bring her back home to Burma (according to many legends, in those days, the Burmese considered almost every other statue in his Siam), but from the ground crawled out ants and bitten by them, and then they died. Many years later a random stranger-a monk saw the statue a sign, and offered to build a temple right around it, and today you can see only part of the statue of the Buddha, and the rest remained hidden beneath the earth.

In the temple also has a Museum, founded by the Abbot, and dedicated to Buddhism, as well as tin mining in the local mines. Yet there is a functioning crematorium, a monastery, and old cannons.

🚶 How to get there: the temple is located on the North of the island (temple on a map of Phuket). You can only get here by hired transport or taxi.