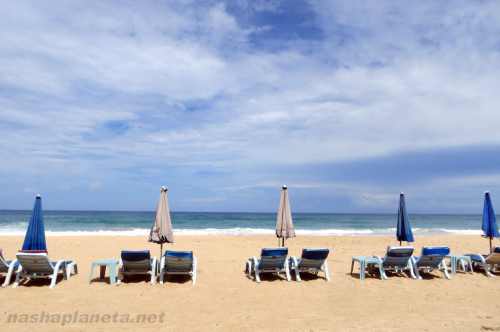 The island of Phuket (Phuket) - the most popular resort in Thailand, located in the South-East of the country in the Andaman sea of the Indian ocean. Phuket is also an independent province. The capital of the island and the province is the city of Phuket (Phuket town).

Phuket is famous and popular among tourists for its beaches and well developed resorts, beautiful coral reefs and coves, rocks and clear sea. Here is several resort areas that are very different from each other in atmosphere and infrastructure development. The most popular and developed resort, Patong beach, almost not inferior to the entertainment capital – the city of Pattaya. But a place much quieter and calmer, where there is a village atmosphere, and no one and nothing will disturb your relaxing beach holiday. Around is full of small Islands, some of which are uninhabited and, at the same time, accessible to tourists. A large part of Phuket is covered with tropical forests, which, combined with falls, parks, coconut plantations makes Phuket an ideal place for relaxation and excursions to the jungle. 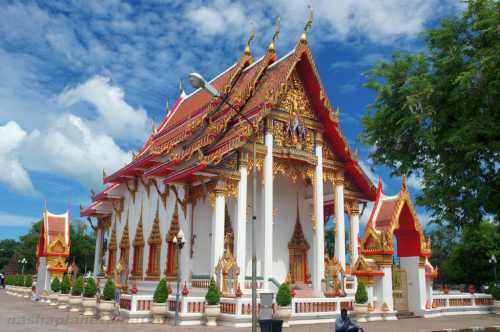 For tourists there are all conditions which can only wish. You can settle in the most developed and busy tourist area and Patong beach, which is hardly inferior to the famous Pattaya Central and offers a quiet and secluded beach of Mai Khao, where for many kilometres you will not meet anyone. And it is possible to find a middle ground and settle on the beach of Bang Tao, where and to entertainment of Patong very close, and beach-goers quite a bit. In General, the place you can pick up for every taste. There is, however, one feature: Phuket are very few hotels on the first line, and most of the time to get to the beach, have to cross the roadway.

Not deprived of Phuket and historical and cultural attractions: many churches and several museums. Also has many natural attractions and beauty, you can make a trekking trip through the forest, Quad Biking, horse riding on elephants and so on. And yet, here the best conditions for surfing in Thailand and even hosts international competitions.

The infrastructure on Phuket is well developed, the whole of the island permeate the roads are excellent, many shopping centers everywhere, hotels, cafes, restaurants, entertainment. But on the other hand, unfortunately, Phuket is no longer a wild tropical Paradise, and if you are looking for Meloidogyne tourist destination, better to look for another island.

Weather in Phuket, the tourist seasons

Phuket is a tropical climate throughout the year is hot and humid. Here there is no winter, summer, spring and autumn. On Phuket and throughout Thailand, decided to allocate only two seasons – rainy season and dry season. Throughout the year the temperature does not fluctuate much and remains in the range of 30-33 degrees. The hottest months are considered the months from March to may.

Dry season (high season) usually lasts from November to April. This is the best time to travel to the island. If I had to pick a time to visit the island, it is best to go in the period.

The rainy season (low season) lasts from may to October. This time can be long rains and the sky for a few days overcast. But can be quite nice, Sunny weather. During this period, the probability of being in bad weather is significantly higher than in the dry season, but usually the rains, though heavy, still short.

An important factor to stay in Phuket are the waves. In April to Phuket from the West begin to blow the monsoons, forming permanent waves. High waves occurs in June-August. Besides the constantly blowing wind and the waves beat and wash debris and dirt. Considering that most beaches in Phuket located on the West coast of the island, tourists who prefer a "lying-floating" beach holiday with the coast disappear, and their place is taken by more active surfers. Only on some beaches during this period, you can safely wallow in the water. In October the waves are on the decline, and in November begins the influx of tourists and high season.

The seasons in Phuket for months, when is the best time to go

Current weather in Phuket and forecast for the near future:

Time difference between Phuket and Moscow is +4 hours in winter and summer.

Current time in Phuket*The time difference with the cities:
* - if time is incorrect, refresh the page Ctrl+F5: