This page is automatically created by the automated computer text translator, and originally written in Russian (Переведено сервисом «Яндекс.Переводчик»). The original version of this page in Russian is located here. We are apologize for any possible inaccurate and incorrect translation of certain phrases and expressions below.
POPULAR TICKETS
✈ Bangkok ⇄ 22 476₽✈ Phuket ⇄ 27 413₽✈ Krabi ⇄ from 30 000₽✈ Mai ⇄ 31 490₽✈ Rai ⇄ 38 070₽✈ Koh Samui ⇄ from 39 330₽ 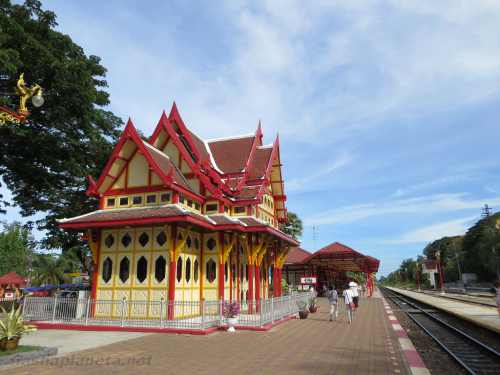 Train station Hua hin is positioned as one of the main attractions of Hua hin and the most beautiful station in Thailand. For locals, this place is very important and almost sacred. The fact is that due to the construction in 1911, the station Hua hin began to develop and turned into a resort. But the most important is that in 1920, near the main building there is an additional Royal waiting room in which to spend time while waiting for the train members of the Royal family. Currently the Royal hall is not in use, but they're a start.

Architectural station is really interesting, especially the Royal hall. It is designed in traditional Asian style, entirely of wood. It is possible to come close and look inside, but nothing special there, will be able to see is that the air conditioning system. In the same traditional style and completely made of wood and the main station building. In front of the station is a pointer to the name of the city. He is a symbol and is sold in souvenir magnets and key chains, be sure to take a picture next to him.

If you go over the railway, you can walk in the small Park. There are vintage steam locomotive.

About how to get to railway station to Hua hin by train, read here.

🕐 Time of work: round the clock.

🚶 How to get there: the station is located in the city centre (railway station Hua hin on the map), you can get there on foot.