Attractions of Cha am (Thailand), what to see

This page is automatically created by the automated computer text translator, and originally written in Russian (Переведено сервисом «Яндекс.Переводчик»). The original version of this page in Russian is located here. We are apologize for any possible inaccurate and incorrect translation of certain phrases and expressions below.
POPULAR TICKETS
✈ Bangkok ⇄ 26 253₽✈ Krabi ⇄ 32 390₽✈ Phuket ⇄ from 33 005₽✈ Mai ⇄ 40 442₽✈ Rai ⇄ 41 114₽✈ Koh Samui ⇄ from 42 619₽

Attractions in the town of Cha am, with the exception of a couple of the city's churches, almost none. But there is quite a lot of interesting places, so even a couple of weeks off there is always something to see. Moreover, it is not necessary to limit the examination of the attractions in and around cha am, and to capture still and interesting sights of Hua hin and visit the temple city of Phetchaburi.

To see these sights, it is easiest to use the tours that are sold in local tourist agencies and hotels. If you are ready to rent a car, all of them with success you can see yourself using for the trip including our interactive map of the attractions of Cha am. 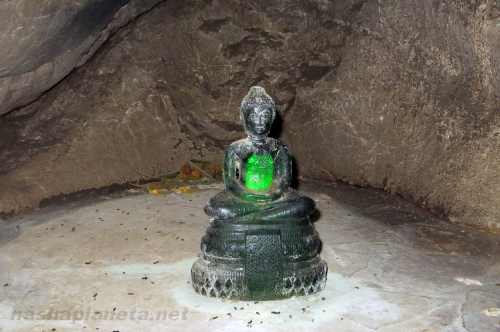 The Temple Of Cha-Am Khiri

This wonderful cave temple is located just a few kilometres from the centre of Cha am. In our opinion, this is one of the most wonderful places near the resort, and it is a must see. There is almost always quiet, no crowds of tourists, and even locals.

The Shrine includes several buildings and two caves. They are very small, and rather similar to the recesses in the rock, but very interesting. As usual, they are Buddha statues and small pagodas, but in the upper cave houses and the footprint of the Buddha. To find the cave you need to climb the steps up the hill.

🚶 How to get there: the temple is located three kilometers from the city centre (the temple on the map) 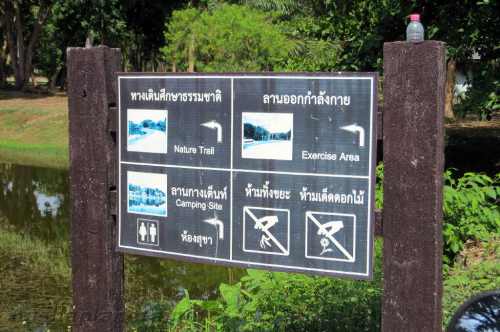 It is the forest (forest Park) a few kilometers from cha-am on the main road towards Hua hin. You can just walk and get to know Thai flora fauna. Unfortunately, its proximity to the road and large cities not in vain, and to see the animals, the more exotic, you need to be real lucky. The chances of seeing something interesting are better if you hire a guide in the Park.

You can just come here to leave their transport on one of the free Parking and go for a walk in the woods. No admission fee is charged, no services are forced. Near the entrance is the headquarters of the Park, which features gazebos, there is a toilet and the water works restaurant. On-site signage razmeshalsya routes. 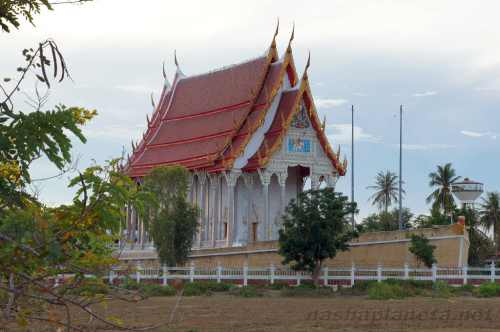 Thais never cease to amaze with their temples. So in this case they have tried, without becoming limited to the beauty of the traditional Thai temple, and took the overall design. And built a temple-ship, also known as the Boat Temple.

Of course, the Church does not swim, if you look at it from the side, he, without any exaggeration like a boat, on the deck which is built in a traditional Thai temple. Even if you look at the photo of the temple from space on Google maps, it is easy to see the outlines of the boat.

In addition to the unusual shape on the outside, the temple is nothing remarkable stands out, so you can confine it to external examination and photographing.

🚶 How to get there: the temple is located 10 kilometers from cha-am on the coast road towards Petchaburi and Bangkok (the temple on the map)

This temple-monastery is situated almost in the heart of the city, just two kilometers from the Narathip Alley to the North (towards Bangkok). He is perhaps the most important and most famous local temple. Remarkable six-armed statue of a seated Buddha, covering his eyes with his hands and ears in a sign of the renunciation of human passions. Behind the statue is the Phra Ubosot are several unconventional architecture.

Near the temple is a statue of king Naresuan the great, with numerous figures of roosters. They say that king Naresuan was very fond of cock fighting, and so the Thais bring his statue roosters across the country. According to another version, the rooster symbolizes good luck.

Pedestrian street Saphan Hin was opened in 2011 and is designed to be one of the most popular attractions of the resort. What happened, you'll be able to check themselves.

The street consists of a dam, which stretches into the sea for 1.5 kilometres. This place is for, making morning runs or evening walks, fishing and photography. It offers scenic views of the coast, and in its beginning, on the beach, plenty of cafes with fresh seafood. At the end of the street there is a statue of two squids.

🚶 How to get there: the entrance to the street is at the end of the public beach on the North (street map). You can get there on foot, strolling along the beach.

Bat cave or Na Yang Bat Cave – a little known attraction, but one of the most spectacular in the area. Some rare natural attraction can cause so much emotion as this, at this, for some reason, the cave is almost unknown to a wide range of tourists, and is not mentioned in any guidebooks.

Actually in the cave when you visit this attraction you will not get. It would be more correct to call it the mountain of bats (so, however, it is sometimes referred to in some sources). Every day of the cave in the mountain at about the same time at sunset (around 18 hours) fly millions of fruit bats to hunt at night. An incredible spectacle and spectacular. Mouse fly thick thin stream from the mountains, and go to the farmers field. In the quiet windless weather, you can hear them rustling, which can run shivers down my spine. But the fear of these creatures is not necessary, because it's a fruit, not blood-sucking mouse.

💵 Entrance fee / ticket price: free or 20 baht during the ascent to the observation deck

🕐 Work time: mouse fly at sunset, from 18 to 19 hours depending on the time of year. Better to arrive there early to find a viewing platform next to the house.

🚶 How to get there: the Cave is located about 12 kilometers from the city (the observation deck on the map). You can get there only by taxi or rented transport. To watch the show right from the road, but there is also an observation deck in a private house, which costs 20 baht.

The Nang Phan Thu Rut nature trail (also spelled Khao Nang Phanthurat or Khao Nang Phanthurat National Park) is a route in 3 and a half kilometers through the jungle and hills. This is a great opportunity to get acquainted with the local flora and fauna, visit caves and make great photos.

The route is not too complicated and available to anyone with a normal physical form, but have to constantly get up and down. To cover the entire route, you'll need at least 3 hours, and don't forget to bring water. A guide is not needed.

💵 Entrance fee / ticket price: to pass the route in the daytime.

🕐 Working time: free. At the entrance to the Park has a Visitor center, where for a fee you can hire a guide or get information about the Park.

🚶 How to get there: the Cave is located about 10 kilometers from the city (on the map). You can get there only by taxi or rented transport.

This Shrine is a very important place for local. There is a tradition: if you don't come to this Shrine every time I pass by it, at least to honk from the road.

The Shrine is made in the form of a pyramid and are very easily recognizable from the road. But its position is very easy to identify by constantly coming on the road the sound of the honks of passing vehicles. To the top, unfortunately, to rise will not work: though there is a staircase, it is closed to sightseers. Around the "pyramid" there are numerous figures of animals, which bring the gift of the Shrine.

In General, to do and to see here, not much, but if you pass by, you can stop by for a few minutes.

🕐 Time of work: round the clock.

🚶 How to get there: the sanctuary is located a few kilometers from the center of the city (the observation deck on the map). You can get there only by taxi or rented transport. To watch the show right from the road, but there is also an observation deck in a private house, which costs 20 baht.

This temple is located a few kilometers from Cha-am in a village surrounded by scenic rice fields. It has a large (about six meters) statue of a monk, surnamed "the Great Eeyore".

Before the statue was fully dark brown, and its lower part is covered with pieces of gold leaf. In 2013, the temple underwent restoration, and the monk was fully painted, that's why became less picturesque. However, if you move in the direction of the bat cave, you can jump in for 20 minutes.

🚶 How to get there: the temple is located 12 kilometres from the centre of cha-am on the way to the bat cave (the temple on the map). It is located in a village away from the main road, so to find it, you will have to take help of local or Navigator.

Santorini Park Cha-am recreation Park, stylized Greek island of Santorini. It is a place with difficult can be attributed to the sights, but if you want to have fun, especially with children, the best place in the vicinity of Cha-am is not found. There is a water Park, a Ferris wheel and other rides, and, of course, plenty of shops and cafes.

Photos attractions of Cha am