Grand Palace in Bangkok (The Grand Palace) is a place without visiting which to leave Bangkok does not. Among the many temples and sights of Bangkok Palace is the most important and interesting, but for Thais this is one of the most sacred places.

It is very reasonable to combine a visit to the Royal Palace with a visit to the temple of the Reclining Buddha (Wat Pho) and Temple of dawn (Wat Arun)that is very close.

Grand Palace of Bangkok is a complex of buildings and temples of incredible beauty. He began to build in 1782, and construction officially ended in 1785. It was built of wood, and over time more and more overgrown with new buildings, and wooden buildings were replaced by stone buildings. Now it covers an area of 218 thousand sq. m. (for comparison, the square of the Moscow Kremlin is 277 thousand sq. m.). The territory is divided into available to tourists and closed. In the closed part is the Royal residence and administrative building, and there entry to outsiders is strictly forbidden, security everywhere. But the open to visit the most beautiful territory: here are several palaces and temples, the throne room, stupa and Museum exhibitions. Detailed information about all the buildings and a map of the Royal Palace you can get a free booklet when you purchase tickets.

Especially from all the buildings of the Royal Palace stands the Palace of the emerald Buddha (Wat Phra Kaew), built by order of King Rama I and destined for his personal worship of the Buddha. It contains a statue of Buddha made of pure emerald (jadeite) height 66 inches, which was discovered in 1431, and by whom, and when it was made, according to legend, nobody knows. Found the statue in the temple of Phra Kai (Wat Phra Kaew) in Chiang Rai in the North of the country, and according to one version it was hidden in another Buddha statue made of clay, and the other covered with Golden plates. Taking pictures in this temple is strictly forbidden, although you can go to the temple hall you can.

Despite the fact that the Palace is the official residence of the Royal family of Thailand, the king and his family do not live here since 1946. In 1946 in the Palace under mysterious circumstances he died, king Ananda Mahidol, Rama VIII, and since then, the Royal family resides in the Chitralada Palace in Bangkok, too. Here the king appears only for formal occasions. Reliably the cause of death of king Rama VIII was never installed, or at least not announced to the public, and discussing the circumstances of this tragedy in Thailand is prohibited.

For a complete tour of the Palace should be given at least half a day, and ideally this should be done with a guide, audio guide, or at least with a paper guide. When buying tickets you can get excellent paper guide to the Palace with a detailed description of absolutely free, or for 200 baht media player-audio guide, which in detail will tell about the history and guide you throughout the Palace (the Russian language). Also at the entrance there will be many offers to escort you to the Palace from the living guides, price which is negotiable. 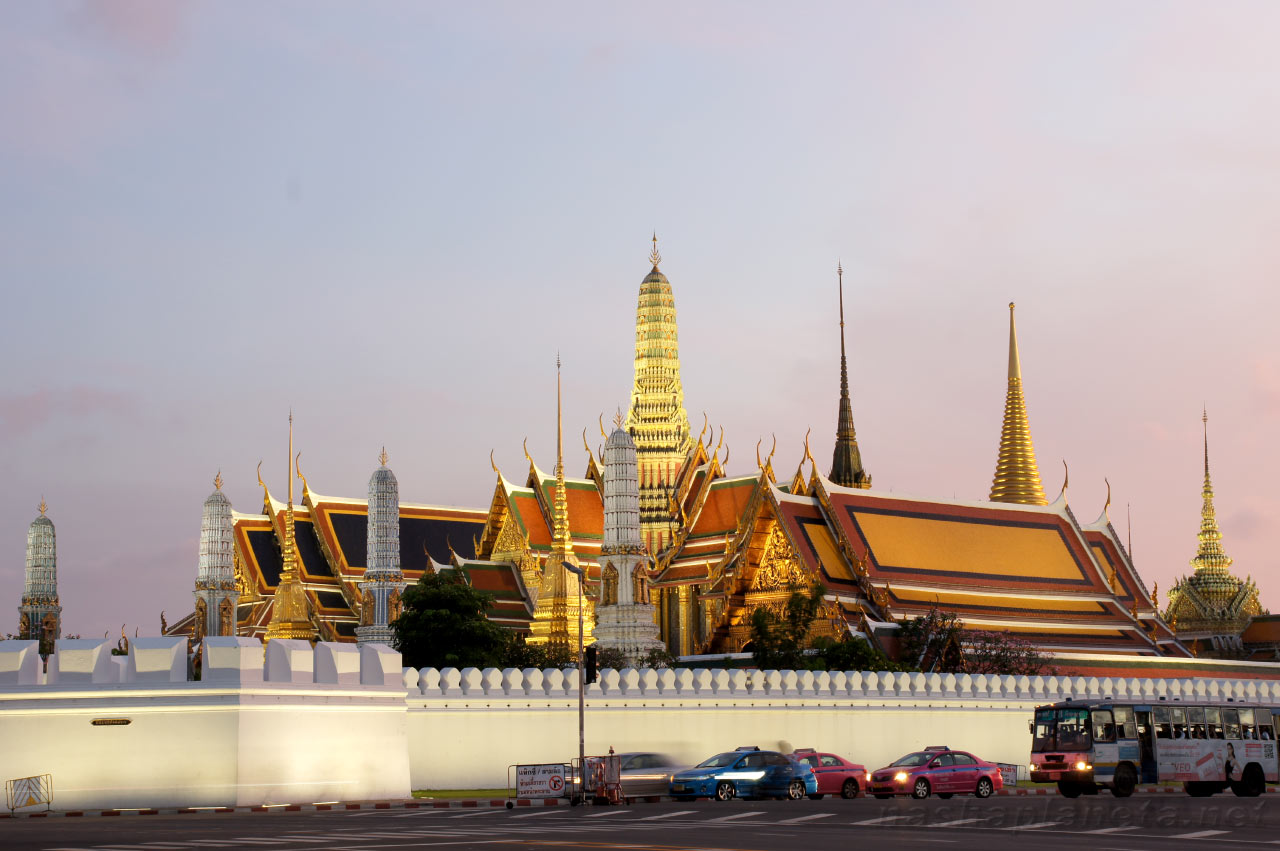 It is best to start the examination of the complex from the early morning, when it's not too hot and not very many tourists. Buses with groups of tourists are very active to arrive here around 11, and after that time had almost no chance to make nice pictures without crowds of tourists. After lunch the tourists here is so much that sometimes even hard to push in some of the narrow passageways of the Palace. So, if you want to see the Palace in a more relaxed atmosphere, welcome here by 8:30 in the morning.

To get into the Palace, one must pass through the main gate (the main gate and the entrance to the Royal Palace on the map). Immediately after the passage you will have to pass through a cordon of guides, all helped and made a pass, from which should be abandoned. Around here you pass a dress code for access to the Palace, and if you are not dressed appropriately (t-shirt with bare shoulders, shorts, short skirt, beach sneakers are not acceptable) you will stop and offer to rent a wrap. Moreover, the Cape is free, you only need to leave a Deposit of 200 baht. With large backpacks and bags, food and drinks at the Royal Palace, too, can not let, you can try to leave in the storage chambers where the issue capes.

Offices are not located immediately after entering the main gate. You need to pass straight through to the end, and then to the left, there you will see the cash register. Buy tickets only at the box office, and not with hands. To navigate the complex of the Royal Palace can be loose, arbitrary route. Photography inside the Palace is allowed, but is strictly prohibited in the Temple of the emerald Buddha.

Beware. Near the Palace is always spinning, the scammers, the tuk-tuk drivers with traditional wiring: today the Palace does not work, let me take you on a free tour. This tour ends with the visit to the jewelry shop, where asbout to process until you don't buy.

🕐 The operating time: daily without days off from 8:30 to 16:30 (ticket sales and entry of visitors stop at 15:30). Sometimes (very rarely) the Palace is closed for special Royal ceremonies

Metro station close to the Royal Palace there, and from other parts of Bangkok will have to take a taxi, boat or bus transport. The taxi ride on the meter from the Royal Palace of the most Central parts of Bangkok will not cost more than 200 baht. If near your hotel there is the subway, easy access to BTS Saphan Taksin, and then from the pier near the station on the Express Boat along the chaophraya river for 15 baht to swim to the pier next to the Royal Palace. This route is nothing complicated and is not very interesting. Cheaper to the Palace can be reached by city buses №1, 3, 9, 15, 25, 30, 32, 33, 39, 43, 44, 47, 53, 64, 80, 82, 91, 201, 203, 501, 503,508, 512 (travel depending on distance and category of bus stands from 6 to 23 baht), but at time can be quite long. To find out whether a particular bus route in the area of your hotel can use the service on the official website of the city bus BTMA or just ask at the hotel reception.

Another option to get closer to the Royal Palace to swim through the channels on the regular boats on the canal of Bangkok. The nearest water taxi stop is located near the Temple of the Golden mount (almost two kilometers from the Palace) and is called the Phan Fa Lilat. To sail direct to it from the districts of Pratunam and Siam for 13 baht.

Panorama of the Grand Palace

You on the previous post about drugs or all about shopping in Dytiki? ...
Re: General questions about Bangkokadmin 13 September, 2018
Although, in principle, no matter what you buy, after all, on all purchases from duty free are subject to all customs regulations and other imported things, so there is no difference. ...
Re: General questions about the cityof Satanta 17 September, 2018
Hello. I want to consult on this issue. Planning a trip to Thailand. This will be my first independent trip abroad. Just flew to Turkey packet tours. And the question immediately arose - do I need to do insurance? And then I looked on the Internet how much it costs - the amount is not to say that a penny, while another franchise is. Here and think - does it make sense? And that means the beneficiary in the contract? This is the one who gets the insurance money? ...
Re: General questions about Bangkokadmin 17 September, 2018

Insurance always makes sense to do, see for yourself and weigh how you plan to spend your vacation: whether to sit on the beach or to move, whether to rent a car, etc. and to discourage insurance you definitely not going to then not be guilty. ...
Re: General questions about Bangkokaksinew 17 September, 2018
I was issued a visa and needed insurance, but upon talking with friends who travel a lot understand what is a jackdaw , maybe there is a real working company... but the neighbor went on a 4 month Ty to live and nothing irmler although he led an active life there. ...
Re: General questions about Bangkokadmin 17 September, 2018

And that means really working and not working? In almost all the insurance you can obtain assistance under the Treaty, they just (conditions of contract) must be observed. And there are Oh so many exceptions, which payment or treatment you receive, unless you carefully read and observed. Don't take the cheapest insurance, use the additional options on it (like driving a car, motorcycle, active sports).
As for your example... good for your neighbor, that nothing happened. And if it happens, then what? I too travel without insurance when one until sweeps, but always something can happen on it and the insurance. And with family travel must insure at least children always. ...
Re: General questions about BangkokJenke 14 October, 2018
Tell me, please, whether to go to the crocodile farm? Or it is better in the world of Safari? ...
Re: General questions about Bangkokadmin October 14, 2018

IMHO, I would not go. Still in Safari, lots of animals. ...
Re: General questions about BangkokMechtateli 5 January, 2019
Yes, Safari is what you need ... ...
To reply or discuss the topic on the forum
CONNECT
⌃
✖Календарь недорогих авиабилетов