This page is automatically created by the automated computer text translator, and originally written in Russian (Переведено сервисом «Яндекс.Переводчик»). The original version of this page in Russian is located here. We are apologize for any possible inaccurate and incorrect translation of certain phrases and expressions below.
ADVERTISING: THE MOST POPULAR TICKETS
✈ Bangkok ⇄ 21 925₽✈ Phuket ⇄ 26 047₽✈ Krabi ⇄ 27 888₽✈ Mai ⇄ 28 747₽✈ Rai ⇄ 31 520₽✈ Spending ⇄ 32 314₽ 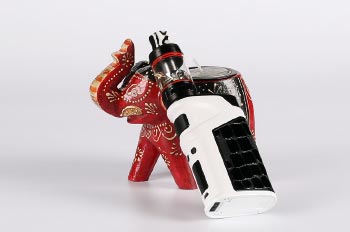 One of the troubles which may face the tourists and travelers in Thailand – ban on electronic cigarettes. Since 2014 banned the sale and use of e-cigarettes. Moreover, violation is not only selling or using, but also trafficking. This means that if the police or customs officers at the border find an e-cigarette or its parts, you can "ring out" in prison. The punishment is quite harsh:

Interestingly, the law provides for a ban on electronic cigarettes purchased after the ban in 2014, i.e. if you can document (cheque, for example) to prove that you bought it before 2014, it is not a violation, at least not yet.

Despite the ban, in popular tourist areas for sale or in the bars you can see these electronic devices as long as the police did not take seriously for this violation. However, we highly recommend to refrain from their use and importation in the country. The police of Thailand is traditionally considered to be very corrupt, and it is possible to face a situation when for such a violation you will have to give quite a large bribe to avoid punishment. And don't believe the assurances of the sellers of cigarettes in Thailand that all legal, because it is possible that after purchase you will immediately be stopped by a police officer working with the seller in cahoots.

Comments / recent posts on the topic on the forum
Re: Common questions about ThailandМарианна25 March 12, 2019
In a set of poker chips and 2 decks of cards)
Thank you very much for the answer! ...
Re: General questions about PhuketAtinA 23 March, 2019
Hello. The first time going abroad. Have a question about conversion. How much approximately is the cost of the conversion when you pay for the hotel by booking through the card VTB,if rasplachivatsya rubles? And what is the principle use of the card VTB world in Thailand. If it is important,then going to Khao Lak is not in season. Thank you. ...
Re: General questions about Phuketadmin 23 March, 2019

Moved your topic from Phuket.
1. If you pay for the hotel on the booking card, the card will be charged the price indicated in rubles. If you need to know the exact conversion rate, change the currency on the booking in dollars and do the math on the calculator.
2. About using times written here - https://nashaplaneta.net/asia/thai/money.html. And what kind of features you use the card VTB world, you get to know in the Bank or to read the terms of the contract. In General features, I think, should not be any, will be able to use it as a card of any other Bank. ...
Re: Common questions about Thailandsmart4111 28 March, 2019
Hello! And it is possible to return the tax per stay in the hotel? Buckingham writes that the price includes sales tax of 7%. ...
Re: Common questions about Thailandadmin 28 March, 2019

If you are renting a car, all OK, and on a motorbike will be fined. As much as I drove a motorbike in Thailand, but I never in my life never stopped, although I have everything as it should be: category a and the international ...
Re: Common questions about Thailandadmin August 23, 2019

If you'll be driving, not fined. If a motorbike will be fined. ...
Re: Common questions about ThailandVetot 20 September 2019
The driver's license of the Russian sample is indeed in Thailand, though the Vienna Convention has not been ratified. Got into an accident through the fault of the Thais, insurance WU admitted (as there are people operate by laws: Convention signed but not ratified). But the Police, especially in tourist areas to prove something difficult, almost impossible. ...
Re: Common questions about Thailandadmin , September 20th, 2019