Vavuniya (well as Vavuniya, Vavuniya) , a provincial town in the North of Sri Lanka in 250 kilometers from Colombo and 230 km. from the airport (see the map of Vavuniya Sri Lanka). It is quite large by local standards, the city, with a population of more than 70 thousand people.

The clock tower in Vavuniya

But you don't necessarily have to make a stop here and the change of the transport, since almost all of these routes are non-stop transport. Make a stop in Vavuniya, you will have only if there are no direct flights or they don't like you on a schedule, or if you want to get acquainted with a typical provincial of Sri Lanka. By the way, the town is not replete with attractions, but very pleasant: the local people are incredibly friendly, happy to communicate and photographed.

To do and to see tourists in the city is nothing special. There is a large market and shops (of course, no modern shopping centers, as elsewhere in Sri Lanka); two bus stations and railway station; a few simple sites in form of temples and monuments, banks and currency exchange; a local cafe. The tourist infrastructure is not developed, but everything you need to find is not difficult.

Accommodation options in Vavuniya only a few hotels and guest houses with basic amenities.

Find and book accommodation in Vavuniya can on these sites or via the search form. All sites have Russian interface and Russian-speaking customer support, numerous real guests reviews. And in Agoda and Booking are bonus system: 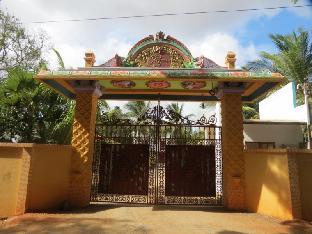 tourists Rating 7.6 out of 10, very goodroom Price from 1389₽Check price

Weather in Vavuniya, when to go

The fundamental values of weather in Vavuniya has not, as it is only a staging post on the way to Jaffna. In turn, the Jaffna tourist seasons during the year pronounced. Besides Jaffna and the North in General is the hottest and driest region of Sri Lanka:

The tourist seasons in the North of Sri Lanka by months*

Weather in Vavuniya and forecast

How to get to Vavuniya, transport

Transportation in the city, than to move on

Urban transport no, you can only move on foot or by tuk-tuk. Car taxis are not. The tuk-tuk at a bargain price, usually ask for 150 rupees (approximately 62.76 RUB, refer to the currency of Sri Lanka) for a short ride around the city, 250 for a trip from railway station to bus station or Vice versa, but you have to bargain.

In Vavuniya there are no iconic landmarks, which would be worth to visit the city. If you find yourself here, the whole town and its interesting sights you can see in a couple of hours during the walk. To stay longer is what is in the colourful main market open in the morning. The other places to look:

The Kandasamy Kovil Temple
🕒 February 24, 2020
Before the trip, don't forget