This page is automatically created by the automated computer text translator, and originally written in Russian (Переведено сервисом «Яндекс.Переводчик»). The original version of this page in Russian is located here. We are apologize for any possible inaccurate and incorrect translation of certain phrases and expressions below.
POPULAR TICKETS
✈ GMT-Colombo ⇄ 29 797₽✈ SPb-Colombo ⇄ 37 189₽✈ Kazan-Colombo ⇄ 41 077₽✈ Samara-Colombo ⇄ from 42 146₽✈ EKB-Colombo ⇄ 45 374₽✈ NSB Colombo ⇄ from 52 034₽

The exchange rate of Sri Lanka

The exchange rate of Sri Lanka is fairly stable, though its value is slowly but surely declining relative to the dollar. One hundred rupees approximately corresponds to 37 rubles, therefore, to convert the amount from rupees to rubles, just divide the cost in rupees of three, for example: RS 100 / 3 = 33 rubles. Or more simply, multiply the amount in rupees to 4 and remove one zero, i.e., RS 100*4 = 400 - remove zero = 40 rubles.

* Calculator recalculates the amounts based on the official world currency exchange rates. When exchanging currency in exchange offices the rate will vary slightly depending on the exchange fee
Enable widget currency*

* - If you enable the widget, the exchange rate of the selected currency will be displayed in the right sidebar on every page of the website until you unplug yourself.


The Currency Of Sri Lanka

The monetary unit of Sri Lanka – Lankan rupee (Sri Lankan Rupee). And is denoted by LKR Rs. This is a fairly stable currency, and its exchange rate against global currencies change infrequently and smoothly.

To bring to Sri Lanka can dollars and euros. Not much difference and you can change one and the other. To pay always accepted in local currency, although tourism services, hotel accommodation, can be paid in dollars, but the benefit is not in your favor. Categorically it is not necessary to pay dollars in the markets, in stores or restaurants, because even if you agree to accept such payment, give change in local currency at an unfavorable rate.

Where to change currency in Sri Lanka 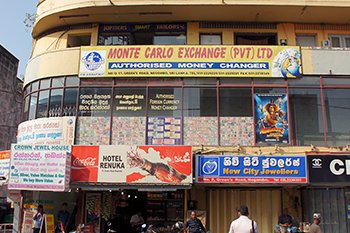 To change the currency in Sri Lanka can be anywhere: in banks, exchange offices, hotels, jewelry and souvenir shops. Find exchange is possible in all larger cities and tourist areas. Maturities in remote areas problematic to find an exchange, so it is better to change money before sending in such places.

Usually "entrepreneurs" offer a slightly more favorable rate than banks and the airport in Colombo, however, it is advisable to make the exchange of official institutions, because private traders the risk of being cheated. The exchange rate at the airport is quite acceptable, but still somewhat less favorable than in the cities. In General, the exchange rate between different versions of exchange points minimum, so you can easily change at the airport and at the Bank and in the shops (only careful not to deceive).

The rate for large bills (50 and 100 dollars) is slightly higher than for small. The difference in the rate between the exchangers, which are even on the same street opposite each other, can be substantial, so walk around a few exchange offices before making a decision. And in exchange offices it is possible to bargain and offer more favorable rates. Traditional assurances "Today the rate is lower than yesterday, because the dollar has fallen dramatically", can be heard everywhere, and it's always true. Bargain!

To exchange currency back, i.e. from rupees into dollars or euros at the airport when departing, but only with the help of the original exchange, which is issued only when in official exchange points. Some exchange offices in the exchange additionally keep a Commission.

And another small remark on the exchange: exchange a hundred dollars, you will receive quite a big wad of local notes, and changed $ 500, will be a long time to shove her pockets. Therefore, at least for the purpose of space saving and security, do not rush to change too much and change as needed.

In Sri Lanka you can easily exchange or to pay with traveler's checks. The exchange is made only in banks. However, it should be borne in mind that in the province even in the banks might not always accept to exchange traveller's cheques, and it is better to cash them in large cities.

Bank cards in Sri Lanka are currently well distributed. To pay them is possible in large cities, in stores, in large hotels (but not all). ATMs are in every tourist area. Sometimes find ATMs even in the most remote provinces, where there are no tourists. But not all ATMs that can be found, allow you to withdraw money with international plastic cards Visa or Mastercard.

Keep in mind that Sri Lanka belongs many banks to high-risk countries when working with plastic cards. If you don't notify your Bank about the intention to use your card in Sri Lanka, it may be locked at the first transaction.

Import/export of currency in Sri Lanka

The amount of imported foreign currency in Sri Lanka is unlimited, but amounts over the equivalent of $15 000 (including travellers cheques) must be declared. When importing currency, subject to Declaration by the amount equivalent to more than $5 000 if you intend to export it back.

Indian and Pakistani currency is prohibited to import/export.

Import/export of national currency of Sri Lanka is limited to a maximum of 5000 rupees.

Tipping in Sri Lanka is not required. However, the staff at the hotel, the waiter in the restaurant will be grateful for a few extra rupees. Moreover, a gratuity for the staff at the hotel (maid) can almost guarantee the safety of your belongings in the room. Don't be surprised at what some local can ask for money from you, even for simply supported conversation.

In accounts of hotels, bars, restaurants included GST (of 12.5%), so to leave a tip there is no need.