This page is automatically created by the automated computer text translator, and originally written in Russian (Переведено сервисом «Яндекс.Переводчик»). The original version of this page in Russian is located here. We are apologize for any possible inaccurate and incorrect translation of certain phrases and expressions below.
POPULAR TICKETS
✈ GMT-Colombo ⇄ 29 399₽✈ SPb-Colombo ⇄ 34 525₽✈ Samara-Colombo ⇄ 38 430₽✈ Kazan-Colombo ⇄ from 39 163₽✈ EKB-Colombo ⇄ 40 864₽✈ NSB Colombo ⇄ from 46 144₽ 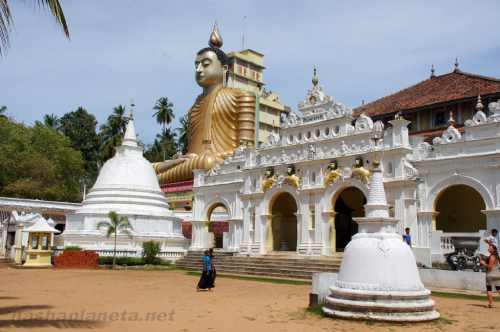 The full name of this temple is Wewrukannala Raja Maha Viharaya. For the Sri Lankans is one of the sacred places, and so the temple is always full of believers. They come here to pray and to see the biggest sitting statue of Buddha on the island (height - 50 meters). But for tourists this place is interesting not only by the statue.

To get to the statue, you must first pass through a long corridor of horrors. Here, the walls are spray-painted terrifying pictures of the punishment of sinners by the demons, and at the entrance there are several scenes with statues of life size, again, on the subject of the punishment of sinners. Scenes and images are really horrific, which is not typical for Buddhist temples.

🚶 How to get there: the temple is about a mile from the centre of Dickwella inland (temple on the interactive map Dickwella). Visit the temple better in a rented transport or tuk-tuk, but if you want to save money, you can be reached on foot. If you want to go to the temple with other resorts in the South, it takes you to the bus station, Dickwella, and then walk away.

To health ;) . Soon about Tangalle and Kogalla still be added. ...
Re: Matara, Mirissa, Weligama, Tangalle etc.rose 3 Dec, 2014
How to get to cinnamon plantations in Koggala?
And about the spice gardens tell, please, - except in Matale, because they are still in there somewhere? Maybe there's a smaller garden, not as expensive, but with all the same trees? ...
Re: Matara, Mirissa, Weligama, Tangalle etc.admin 3rd Dec, 2014

You, apparently, about cinnamon island? If so, there carry on a boat during a Safari on the lake. But not encouraging on this score. Though I did not swim myself but had read enough reviews what is Scam and what sort of high prices. Not worth to buy anything there, as in the garden of spices there. All write that the prices are very high, and the same can be bought on markets or in supermarkets much cheaper. I personally was convinced when I visited the spice garden somewhere in the vicinity of Kandy.
By the way, not only in the gardens trying to breed our brother. Once on the market in Galle some"random good passer" was trying to lure to the trays with a frantic prices on spices. All very nicely laid out there, spices extols and 100 meters in the same market it is sold almost half. So that stands out, especially when you want to apply "well-wishers". ...
Re: Matara, Mirissa, Weligama, Tangalle etc.Dimitry Lymar 7 September, 2015
I fly to Sri Lanka for the first time in mid-September.Now how can we reach Tangalle to Nuwara Ella, want to climb Adams Peak. ...
Re: Matara, Mirissa, Weligama, Tangalle etc.admin September 7, 2015

If you're talking about the buses, as far as I know, directly any way. You either need to go via Matara or Colombo. I would go through Colombo, as I am sure that there are buses run more frequently than in Matara, but can themselves be checked. Ie, take the bus from Tangalle to Matara, there at the bus station and go looking for the bus to Nuwara Eliya, if such in the near future, take the bus on to Colombo, where she will quickly switch to N. Uh. At the time it will take half a day. ...
Re: Matara, Mirissa, Weligama, Tangalle etc.Sergey.Givaykin 8 September, 2015

It is not clear where you plan to get to the Peak of Adam, or To Nuwara Eliya. From Ovary the Peak is also need to go and go
If you want to climb Adam's Peak, then you need to go to Nuwara Eliya and Hatton and from there again or bus or tuk-tuk. And the bus to Hatton is from Colombo, are often. On the way from Tangalle is guaranteed to spend the whole day.
Via Matara to-Peak common way longer, and well, considering the road... But if you still need to get to Novara, then in Matara, there will be, at best, towards evening. ...
Re: Matara, Mirissa, Weligama, Tangalle etc.admin 9 September, 2015

You're right, Adam's Peak the best of Hatton, just there doing nothing at all because, in principle, N.Uh. a good place to crash to just walk around there a day and then to the peak. But it is the author of the question to solve, of course.
About to reach in half a day I really got excited. So if you estimate one hour to go to Matara, then 5 hours to Colombo, and plenty to N.Uh. If early Wake up (5 hours), we can before dark and drive. Still advise to go to Colombo on a small private buses-Express (such seats 20) but not in the usual large. They go nonstop and very quickly all places sedentary. Not sure there are such from Matara, Galle but on this 3 hours before Colombo was reached. If anything, from Tangalle to Galle there are direct buses (as well as to Colombo), but as I recall is slow. ...
To reply or discuss the topic on the forum
CONNECT
⌃
✖Календарь недорогих авиабилетов