How to get to Colombo, transport

The Bandaranaike international airport from Russia direct flight are only available during high season (winter) companies Aeroflot and SriLankan Airlines. It is possible that in connection with sharp growth of popularity of the island among tourists, there will be open and the other direct flights. However, any time inexpensive and quick to get from Russia to Sri Lanka flights with a stopover. The flight takes 9-11 hours.

Find and book tickets to the main Colombo airport in Sri Lanka, you can through the search form. Search is very flexible, and allows you to search for flights on different dates, with or without transfers, in both directions or one, etc.:

Check out the prices on cheap flights to Colombo:

How to get from Colombo airport to the city

Colombo is connected with almost all cities of the country by bus. This is the main form of travel for locals, and a very convenient way for tourists. You can get anywhere, and very inexpensive.

Buses on routes are of varying quality: from the old and rotten to modern air-conditioned depending on route and company. The most common carrier in the country - the Sri Lanka Transport Board (buses with the logo of the S. L. T. B.). Tickets this company the cheapest, but the buses are the worst. There are also many other small bus companies offering buses of better quality but at higher prices.

In Colombo buses arrive and depart from three stations, which are located in one place near the centre of the Pettah district:

It is the largest transport hub of the country and hence you can reach to any corner of the island. Here, within walking distance from the station Colombo Fort.

Summary information about routes on Sri Lanka is not on the Internet, but something you can get on the website S. L. T. B. http://www.sltb.lk/ and http://www.sprpta.lk.

In General, about the schedule and routes here too much bother not worth it, buses run frequently. To find a bus to the places you want Sri Lanka can apply to local residents. In most cases they will gladly bring you to the right bus, or at least indicate the direction. 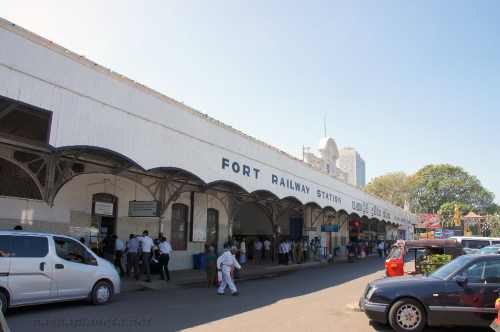 In Sri Lanka there is an excellent and extensive network of Railways, and to most popular places and cities can be reached by train. The most important railway junction of the country is Colombo, namely railway station Colombo Fort. It is located in the city limits close to the centre (station Colombo Fort on the map).

The train tickets to buy via the Internet is impossible, they are only sold at the stations at the ticket office. At the station, Colombo Fort even has a special office for foreigners to make it easier to communicate when buying, but it's not mandatory, you can buy a ticket to any ticket office. It is best to buy tickets in advance, but even before the sending the train, you can always obtain tickets for the lowest classes. Given that the country is small and trains are, as a rule, are not long, a large portion of tickets sold on the Seating and standing places. Yes, most trains during rush hour run Packed and they just have to hang on to the handrails. The fare is very low, is several dollars to the most popular destinations.

There is also a special tourist train (or rather, trailer cars) on the most popular tourist destinations, and tickets can be purchased online at sites https://12go.asia/ and http://www.rajadhani.lk/

Information about schedules and prices is available at: https://www.eservices.railway.gov.lk, http://colombofort.com

Urban transport in Colombo, than to move on

In Colombo there is a system of public transport in the form of buses, is the city's train transportation (something like trains, but they are mostly suburban). But both these means of transport are inconvenient for use by tourists, and much easier to use for travel around the city taxi, the stories of tuk tuks or leased vehicles.

Taxi in Colombo is not very common (much less than tuk-tuks), but you can find them. It is best to use metered taxis (Taxi-meter), the cost of travel for them cheaper. One kilometre trip costs about 60 rupees.

Taxi drivers often offer the trip at a fixed price or say that they have no counter. Better from leaving to give up if you don't know the real cost of a trip. 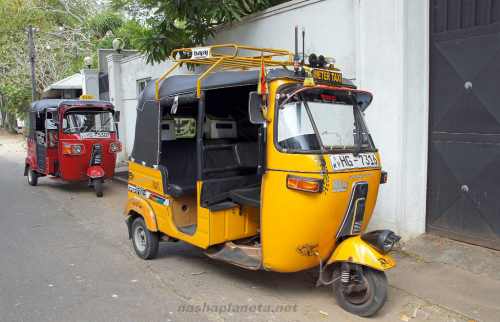 The most fashionable tuk-tuk in Colombo
View photos in 3D

Motorickshaws or tuk-tuks is a scooter converted into a three-wheeled machines for transportation of passengers. They can be quite easy to navigate even the three of us+the driver. They are cheaper than a taxi by about a third, and even twice (for one kilometer around 30 rupees), however, somewhat less convenient and more dangerous. First, they are without air conditioning; and secondly, when travelling on them in rush hour you have to inhale the fumes and the dust. But to visit in Colombo and not go by tuk-tuk is simply impossible.

Tuk-tuk are with counters and without them (those with counters, sometimes labeled on the front a sticker or a sign taxi-meter). Tuk-tuks with meters is much easier and cheaper, so it's best to use it. Just make sure before you travel that your trip will be paid for by the meter as there are pitfalls. The cost of the trip without a meter should be arranged in advance, but don't be surprised if you refuse to carry a cost comparable to the cost of the same trip by taxi. Especially the "start" prices tuk-tuks awaiting passengers near the tourist places. Therefore, in order to find cheap tuk-tuk, better to grab those that wander the roads.

And yet, sometimes the local tuk-tuks cheating in such a simple way: they seem to agree on mentioned price after haggling, inviting you to sit in a tuk-tuk. But when you arrive at the place, Tucker begin to charge you a large amount and make a surprised look, as if he did not agree to your price, just suggested you to sit in a tuk-tuk. Comes to serious scandals. Therefore, before the trip will receive from him an affirmative answer that he just understood and accepted your price, and there will be no surprises.

Colombo works good extensive network of public and private buses. But move them unprepared tourists – even the extreme. Their routes are confusing, no air conditioning, they are going very slowly, almost always Packed, and the passengers pop up almost on the go. Although in General this kind of move is quite easy and costs a mere penny, the main thing – to learn how to use it.

The fare depends on the distance of travel is determined by the conductor. The inspectors do not always understand tourists, and just give the price to of course stay, but even in this case, the trip will be much cheaper than a taxi or tuk-tuk. The maximum fare is 25 rupees.

On the buses the number (without the knowledge of the routes and maps you will get nothing from it), and the area where you want the bus. If you decide to use the buses, it is better to buy a map of the routes. Some buses are suburban and go far beyond the city limits.

In Colombo there is the railroad, which runs commuter trains (like our trains, but not on electricity). They all arrive and depart from the main railway station, Colombo Fort, and they can get to the outskirts of the city.

Of greatest interest is the southern branch. From Colombo Fort train on her way to the South along the coast, making fairly frequent stops at the city stations. So it is very inexpensive to get to and from the popular tourist area Maunt Lavinia (Mt Lavinia).

Comments / recent posts on the topic on the forum
Re: General questions on Sri Lankaadmin 10 February, 2019

But who knows, there will be room when you arrive, or not THINK ,it is necessary to be a fortuneteller to answer. ...
Re: General questions on Sri Lankastasya 27 March, 2019
We're flying in June, Mr. Trincomalee , now our friends are there, send a video, the beaches are so kick some dirty ...
Re: General questions on Sri LankaKarina T. 8 April, 2019
Took a bike in Negombo Lewis Place, 152. Guy speaks in Russian. Gasoline in March 2019 were 132 rupees per 1 liter. ...
The current situation in Sri Lanka after the terrorist attacksadmin April 24, 2019
Friends, if you are going in the near future to Sri Lanka, here's the latest information about the situation in the country following the recent terrorist attacks: In General no problem and restriction is not observed with the exception of input in the evening and night curfews in major cities, but they likely soon will be cancelled. Police and military everywhere lot, security measures are strengthened, but tourists are not affected. Transport operates in the normal mode without any restrictions and on schedule. The sights also work normally with the exception of some measures in Colombo. Yesterday was a day of mourning, everywhere lit candles, hung white mourning flags with the cross, because the attacks were directed against the Christian minority population. ...
Re: General questions on Sri LankaЛюбовь77 October 15, 2019
Good day!
Tell me where in Sri Lanka it is best to rest with a child 5 years? ...
Re: General questions on Sri Lankaadmin October 15, 2019

Hello! Unawatuna, Hikkaduwa, Negombo. But note that there, as in all Sri Lanka, there is no entertainment for children, only the beaches, but these resorts are at least some civilization. I mean, supermarkets, exchange offices, a lot of cafes. Actually, I would personally chose Unawatuna, because there's a great paddling pool for kids, and in other places the waves. Well, the seasons keep in mind about them collected information here https://nashaplaneta.net/asia/srilanka/art-sezony-na-sri-lanke. ...
Re: General questions on Sri LankaAleksandr2 28 October, 2019
Prompt, please, there is a law, but without a category And, as I understand it, there is generally Russian law do not roll... How people take mopeds? Fines are paid, or what ? ...
Re: General questions on Sri Lankaadmin October 31, 2019

There is generally no other than their Lankan rights do not roll. But everything without problems and ride at your own risk. All painted details have nowhere we have here https://nashaplaneta.net/asia/srilanka/art-arenda-motocikla-shri-lanka ...
Re: General questions about Sri Lanka,Igor And 10 November, 2019
Not working your link ...
Re: General questions on Sri Lankaadmin 10 November, 2019