The old building of the first municipality of Colombo (Old town hall Old Town Hall) is slightly lost among the shopping streets of the Pettah district. To look at the magnificent architecture of the period of English rule. The building is dated 1865, and the first meeting of the Council of local government held in January 1866 it was Also and the judiciary. Their work the Old town Hall was carried out at this location until 1928, instead she built a New town Hall (Town Hall), which operates to this day in the North-Eastern part of the Park Viharamahadevi (Colombo 7, Cinnamon Gardens area).

Today the building is a modest Museum, but its exhibits are not in the best condition. On the ground floor preserved steam engines, machinery and old equipment, the second pair of rooms with exhibits of that time, tells about the work of this institution. In one of the rooms even recreated some real dummies representatives of the Municipality. Interest floor boards of mahogany, of unusual design sash Windows. Ministers of the Museum for a modest fee (around 100-200 rupees, refer to the currency of Sri Lanka) with obsessive persistence will take you through the building and tell his story. Not to say that this place has to be one of the first places in your itinerary to visit attractions in Colombo, but if you will walk in the Pettah district, coming here worth it. 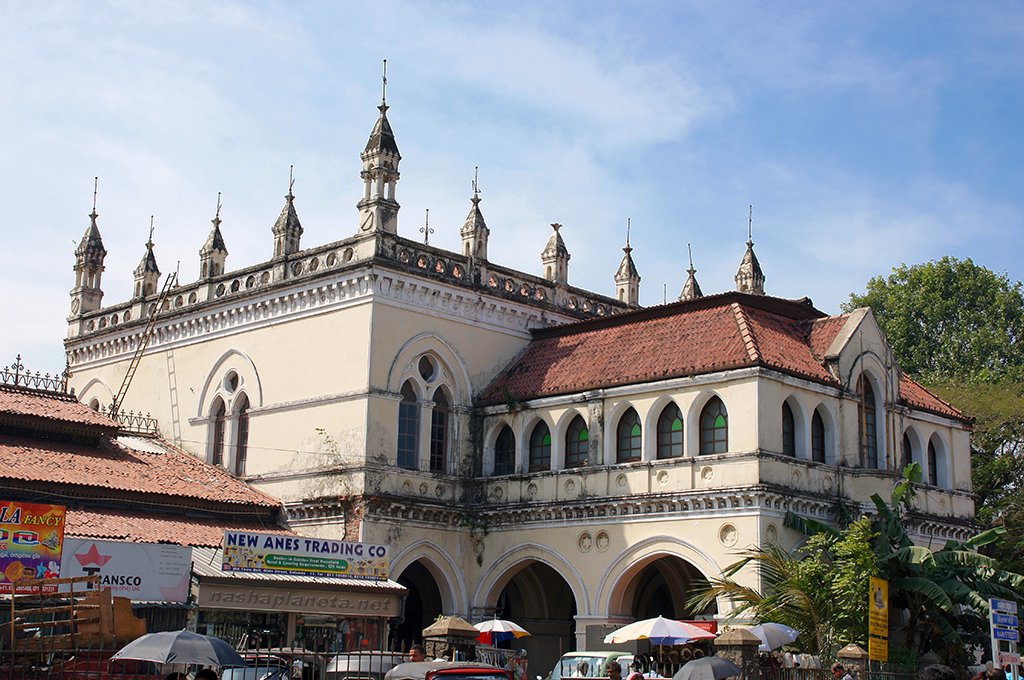 💵 Entrance fee / ticket price: free tips – 100 rupees (38.74 RUB, refer to the currency of Sri Lanka and the exchange rate). Theoretically, to inspect the town hall for free, but make it local Ministers will not allow, and will pursue you until you pay them a tip.

🚶 How to get there: Colombo 11 (Pettah district) in the Eastern part of Street Main Street (old town hall Colombo on the map).

To get acquainted with the sights of Colombo, you can choose group or individual tour with him on one of the sites from the list below or choose one of the most popular:

Panorama of the old town hall in Colombo

Hello Sheri! All information is different, because at various times he apparently was sent from different places or simply different tourists caught it on the way. Three years ago he was left at the site, ogorojennaja fence from stacks, netting, car Park. If the situation has not changed, look for it there. But for reliability it is better to ask on the spot, not on the street, the taxi drivers, they immediately say that there is nothing, and inside the airport at the employees at the front Desk and tourist information for example. Make sure you double check/ask again information from several people. ...
Re: Forum about ColomboZNAdejda January 14, 2019
Input Board obsolete. Now many churches have tickets (they cost 300-400 rupees per person) plus the cost of photo/video shooting and helpers remuneration for additional services. And donations for the development of the temple a separate issue to the discretion of the individual, and for this purpose there are special boxes. ...
Re: Forum about Colomboadmin 15 January, 2019

Hello! Thanks for the info, we at the Colombo detour last time I did about four years ago. So if you have specific information at a cost to the temples, will share it here. ...
Re: Forum about Colombomirobell 18 October, 2019
Please tell me, as at Colombo airport is the situation with queues at the inspection and registration of PI flight?
The memories of Goa covers the horror of possible traffic jams and the need to arrive 5 hours to do everything ...
Re: Forum about Colomboadmin October 18, 2019

Everything is absolutely fine with it. This year I flew immediately after the attacks, while strong security measures are stepped up, a lot of the checks was starting in the street in front of the terminal. But all passed in a matter of minutes. The bigger issue was that due to inspections are not passed to the terminal of the machine, carefully inspect them, so there were huge traffic jams. In the end, simply let go of the taxi and walked the last half kilometer on foot. so quickly turned. But I think now everything has calmed down. ...
Re: Forum about ColomboAna 27 October, 2019
Tell me, please, how much time is spent on passing inspection on arrival?
What to take plenty of time from arrival to ordering a taxi? ...
Re: Forum about Colomboadmin October 31, 2019

Hello! Sorry for the delay in response, myself on the trip, do not always have time to answer. All very quickly, I always passed for about 15-20 minutes and in this time have Luggage on the ribbon, was waiting. But I on e-visa drove always, and now you can get free visa on arrival. So add another 30 minutes for a visa if suddenly the queue will be, and to change money, buy SIM card. I would 40 minutes in the end all planned. ...
To reply or discuss the topic on the forum
POPULAR TICKETS
Colombofrom 29 251₽Bangkokfrom 26 323₽Phuketfrom 31 760₽Samuifrom 43 070₽K. Lumpurfrom 31 805₽Langkawifrom 34 630₽Singaporefrom 31 910₽Hanoifrom 31 365₽Saigonfrom 30 740₽Nha Trangfrom 23 032₽Phu Quocfrom 35 190₽Balifrom 33 960₽Goafrom 34 557₽Top 100 tickets out of your airport here
⌃
✖Календарь недорогих авиабилетов