This page is automatically created by the automated computer text translator, and originally written in Russian (Переведено сервисом «Яндекс.Переводчик»). The original version of this page in Russian is located here. We are apologize for any possible inaccurate and incorrect translation of certain phrases and expressions below.
POPULAR TICKETS
✈ GMT-Colombo ⇄ 23 904₽✈ SPb-Colombo ⇄ 30 002₽✈ Samara-Colombo ⇄ 32 890₽✈ Kazan-Colombo ⇄ from 33 875₽✈ EKB-Colombo ⇄ 36 329₽✈ NSB Colombo ⇄ 41 181₽
Attention! After a series of attacks in April 2019 security measures across Sri Lanka has seriously increased. Everywhere were police and military patrols, organized several additional lines of security control in the airport of Colombo, at the slightest suspicion curfews (usually at night). Heavily patrolled tourist areas, even beaches. Tourists and vacationers is not concerned, except, perhaps, some inconvenience of the airport and additional checks at the entrances to shopping malls and crowded places. In General the situation is calm and safe. 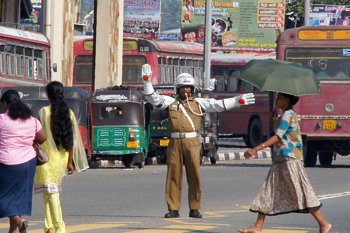 Unfortunately, a very safe country Sri Lanka until called. From 1983 here has been tamilo-Sinhala civil armed conflict, which ended only in 2009 with the victory of the government troops. The roots of the conflict lay in the long-standing confrontation between ethnic Sinhalese (mostly Buddhist) and Tamil minority (mostly Hindu).

The result of this war, there are mined areas, so the warnings about the minefield should be taken seriously. Do not be surprised that on the streets you can see armed people (mostly police officers), and traffic checkpoints. Due to heightened security measures Sri Lanka is one of the safest tourist destinations, but the tension is felt, especially after the events in April 2019. But outside of major cities, resort areas, beaches and areas of the hotels, you'll hardly feel that in this country more recently had some problems.

With crime in Sri Lanka the situation is favorable. Serious crimes are very few. High, which may suffer tourist theft and fraud. Theft of personal belongings from the room, pickpocketing, thefts from safes in hotels, the theft of items on beaches are not uncommon, so this issue should take the necessary security measures, which can be found in the article "issues of keeping money and documents while traveling". Extremely rare case of a robbery by snatching bags, phones, cameras.

Really serious problem for tourists in Sri Lanka are the different kinds of fraud and petty deceptions with the purpose to get more money from tourists. The scammers sell the tourists non-existent travel services, tickets, speculating. Cheat even in churches "linestotal or lemonade". A huge problem with the drivers weave-tuk, which lure tourists to his tuk-tuk "Terry lies". Always be careful and double check what you say, local businessmen and the spring and summer, they are ready to deceive you, even in such seemingly innocuous things as the sights, just to get their benefits.

Here is some of the most simple ways of taking money from tourists to Sri Lanka:

Health and medicine in Sri Lanka

Medicine in Sri Lanka at a high enough level. Clinic, there are free and paid. Of course, it is better to seek help in private institutions, but it is best in such cases to have an insurance policy.

Medications at local drugstores, you can find almost any, but many of them are fakes or they are very low quality. So do not be fooled by low prices at local pharmacies, and is really important to you drugs better bring.

Recommendations for security in Sri-Lanka and traditions of behavior

According to the current legislation allowed to import duty free in Sri Lanka:

Import of cigarettes is permitted only upon payment of a fee. All other things are not from the list above, equipment, jewelry, etc., by law, must be declared to allow their removal later.

All this according to the law, in fact, not every tourist is going to pay a fee for a couple packs of cigarettes and an extra bottle of wine. Tourists neither when entering nor when leaving the country almost never inspected, although, in case you are carrying expensive equipment (photo, video), not be amiss to declare, to avoid problems at checkout.

Import/export of currency in Sri Lanka

The amount of imported foreign currency in Sri Lanka is unlimited, but amounts over the equivalent of $15 000 (including travellers cheques and Bank obligations) must be declared. When importing currency, subject to Declaration by the amount equivalent to more than $5 000 if you intend to export it back.

Indian and Pakistani currency is prohibited to import/export.

Import/export of national currency of Sri Lanka is limited to a maximum of 5000 rupees.

The import of alcohol in Sri Lanka

In Sri Lanka is allowed to bring two bottles of wine and half a litre of spirits per person, but only for persons over 18 years.

Alex, I disagree about the beer and alcohol. No problem everything can be found, you just need the right look, there are restrictions of course. All about alcohol I wrote in a separate article, be sure to read all tourists before the trip on SHL - https://nashaplaneta.net/asia/srilanka/art-shri-lanka-alkogol-i-cigarety. ...
To reply or discuss the topic on the forum
CONNECT
⌃
✖Календарь недорогих авиабилетов