This page is automatically created by the automated computer text translator, and originally written in Russian (Переведено сервисом «Яндекс.Переводчик»). The original version of this page in Russian is located here. We are apologize for any possible inaccurate and incorrect translation of certain phrases and expressions below.
POPULAR TICKETS
✈ GMT-Colombo ⇄ 24 074₽✈ SPb-Colombo ⇄ 30 080₽✈ Samara-Colombo ⇄ 33 320₽✈ Kazan-Colombo ⇄ from 33 845₽✈ EKB-Colombo ⇄ 36 304₽✈ NSB Colombo ⇄ from 39 678₽ 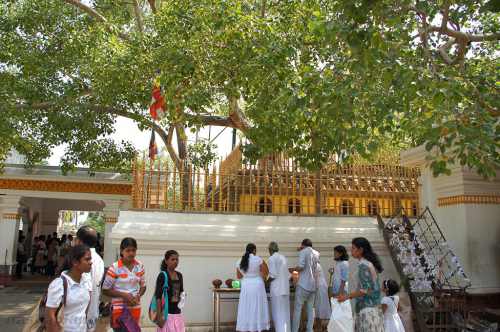 The sacred Bodhi tree or Mahabodhi (Sri Maha Bodhi) is the most revered place of pilgrimage in Anuradhapura. There is always a lot of people, and not only during religious holidays. It is considered the oldest tree planted by man, having a documented history and all planted later and growing now in Sri Lanka, the Bodhi tree (or Bo) are its branches (even his ancestor from India (the city of Bodh Gaya) died, and in its place put the process of Inury). In its essence the same, the Mahabodhi Tree is one of the varieties of ficus.

The Appendix of this wood taken from the trunk of the Bo Tree, under which he attains enlightenment, the Buddha, and brought the nun Sanghamitta (Sanghamitta, daughter of Indian Emperor Asoka (Ashoka) in the third century BC from India. Put him king Devanampiya Tissa (Devanampiya Tissa, St. 307-267 BC) in 249 BC.

The tree itself grows on the pedestal 6.5 m high and surrounded by a gilded railing, some leaning branches are supported by props. On the outer perimeter of he planted trees to protect it from animals and the elements, then another wall with railings. Unfortunately, up close to him is impossible, the entrances are closed and there is security. Near the Tree there is a small Buddhist temple.

In 1929, at the Bodhi tree was made the crazy attack, in which one barrel had been cut down, but still second. And in 1985, a terrorist organization, the liberation Tigers of Tamil Eelam (LTTE) had indiscriminately shot people, killed dozens of people. For this reason, today in front of the territory organized inspection of things (separate for men and women), here you need to leave the shoes.

In December and June, there were the days of poya (Poya) - the most important religious holidays associated with the birth of Buddhism in Sri Lanka. All the arriving pilgrims dressed, usually in white robes.

In 140 metres East of the entrance there is an organized Parking (surcharge).

🚶 How to get: the Bodhi Tree on the interactive map of Anuradhapura