Adam's peak (Adam's Peak) or Sri Pada (Sri Pada) or Zamanlarda (Samanala Kanda butterfly Mountain) is a peak height of 2243 meters on the West of the Central mountain part of Sri Lanka (see Adam's Peak on the map of Sri Lanka). Is one of the highest mountains of the island, and one of the most important tourist attractions of Sri Lanka and places of pilgrimage for the faithful of all religions. It is believed that there is a foot print left by God.

Buddhists believe that the trail itself left Gautam Buddha, Hindu God Shiva, Muslims are expelled from Paradise, Adam, and Christians of St. Thomas or the first man on earth Adam. The Sri Lankan residents in Sri rise-fall is considered mandatory at least once in your life. Every year there are thousands of pilgrims to touch the sacred imprint.

No less interesting is the Adam's Peak and tourists. Go here to see the sunrise, and of special interest to lovers of scenery causes the right pyramidal shadow of the peak at dawn. Visit Adam's Peak is free, access is open round the clock.

When to go to Adam's Peak

The pilgrimage season lasts from December to may (or rather, since the full moon in December till the full moon in April), and at the same time is the best season for tourist visits. It was at this time most likely to catch at dawn or sunset, clear weather, which is very important. In addition, in the off-season pilgrimage access to the Shrine at the top can be completely closed, however, will not prevent to enjoy the views and watch the sunrise with good weather, of course.

The weather here changes very quickly, and began the climb in clear weather it is possible to go upstairs in the fog and rain, and Vice versa.

Weather at the Peak of Adam, and forecast

Note that in the period of the pilgrimage are allocated to special days. These are the days of full moon Poya Days, and at this time, believers find it necessary to visit the Shrine. At this time, pilgrims on the rise so much that the stairs formed human traffic, and on top it is simply impossible to get to the dawn or the sunset, unless you move out the way much in advance and will take place at the top. We would recommend to avoid lifting at this time. Here is the schedule Poya Days for the next few years:

How to climb Adam's Peak

Just on the top there are five ascents from various places. The most popular and a tourist route to the mountain starts from the village of Dalhousie (Dalhousie, also Delhouse also Nallatanniya), where there are hotels and all you need for one night stay. In any hotel Dalhousie you can find a guide (but they are not required, it is easy to climb without them), or to receive instructions for the lift, and right away go on the route. To do in the village itself, Dalhousie absolutely nothing, this is only a transit base before climbing to the top. See a detailed guide to the village of Dalhousie here...

To search and book hotels near Adam's Peak is best in these search engines of hotels worldwide:

Can also choose a hotel using the search box from Him. All sites have Russian interface and Russian-speaking customer support, numerous real guests reviews. And in Agoda and Booking are bonus system:

The ascent is quite difficult, because the possible shortest route from Dalhousie will have to overcome a distance of about 5 km to a height of about 300 floors, almost 1000 meters, and at the time it may take 3-5 hours one way. If you go from Ratnapura, you will have to climb at all at 1800 meters. However, as practice shows, anything is possible, and here rise even elderly pilgrims. Want to see the dawn rise on the top you have to start at 2 a.m. (if you are physically well prepared and will not be human traffic jams on the way up, then you can go at 3 in the morning ) to 6:00 or 6:30 to be in place and not to miss the sunrise. But in the period of pilgrimage, especially at the weekend or in the days of the full moon (see calendar above), the rise is so loaded that even if you go out at midnight, there is a chance to get stuck in a traffic jam and just stand on the stairs until dawn.

The exact time of sunrise at the Peak of Adam today: 06:15

Lift completely runs on a wide well-equipped ladder, any bad sites there. Stairs and one up and down. All along the way to the top where temples and shrines, cafes, trays with food and drinks, toilets (paying 20 rupees), all have lighting. But not in the pilgrimage season (June to November) almost all the shops and cafes are closed, the light extinguished. This time be sure to take a headlamp to keep their hands free.

When you reach the top, you will need to take off their shoes, as it is a sacred place. Shoes can be left on the stairs, but if you're worried, take her bag and place in the backpack. After that on your feet is better to wear socks because the night is cold, the concrete floor is also very cold. Generally, the top is pretty cool and a warm sweater or jacket required, but the locals rise up in hats and gloves.

At the top is the Shrine with the imprint of the stupa of the Buddha, which could see anyone, but the pictures of the thumbprint is strictly prohibited. The Shrine is located on a small fenced area.

The area with the Shrine

After you view it, you need to leave the area to take place to meet the sunset, because it wait for the dawn denied. Best to determine in advance the place and take it, because people, even in the off-season of pilgrimage arrives quite a lot. The most convenient places are immediately to the left of the entrance is the Shrine to the left on the long steps.

The most convenient place to meet the dawn

After you greet the dawn, move to the other side of the court to look at the beautiful pyramidal shadow of Adam's Peak. 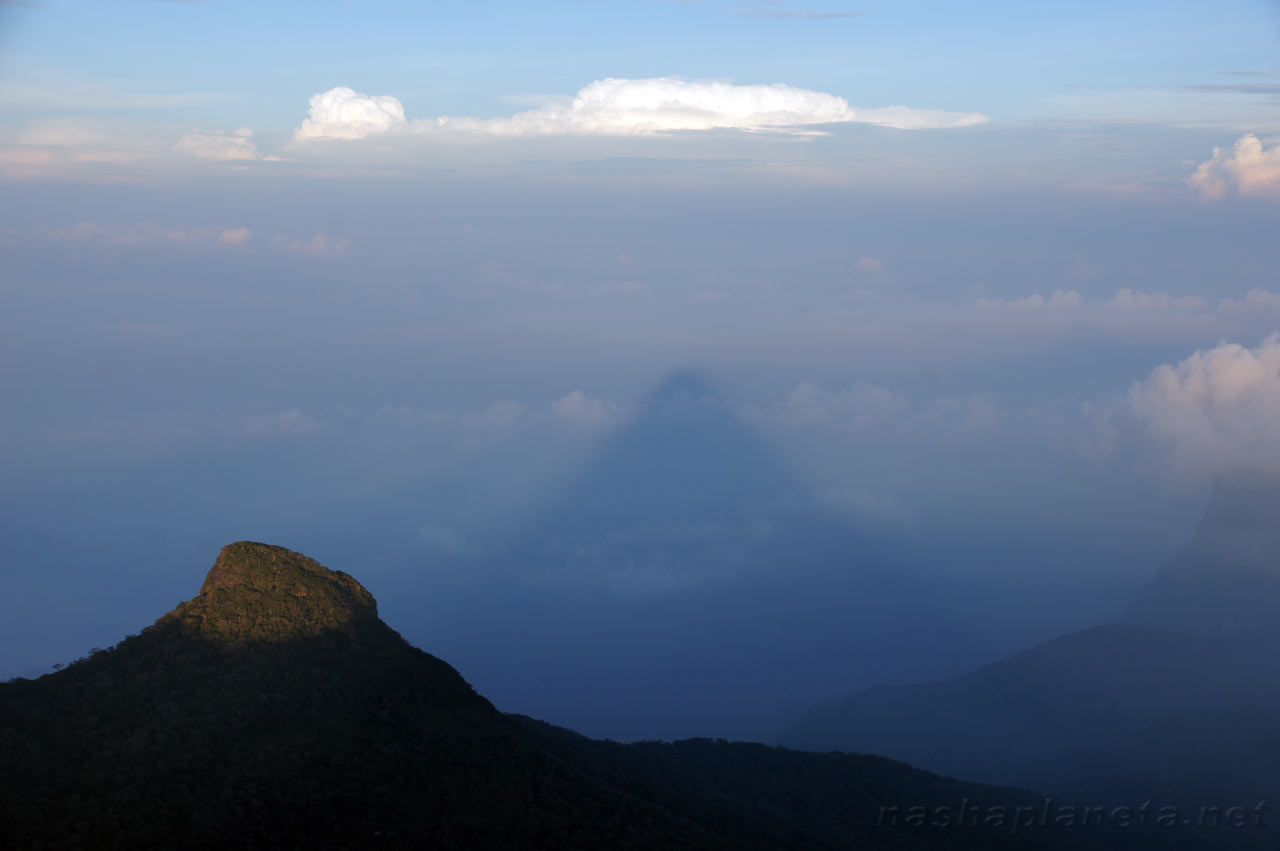 How to get to Adam's peak

To climb Adam's Peak the best from the village of Dalhousie (Dalhousie), reachable only by bus or taxi. The closest major tourist city to Dalhousie is Nuwara Eliya, but also relatively close to the city of Kandy and Ella. In the pilgrimage season (December to may) to Dalhousie can run direct buses from Colombo, Kandy and Nuwara Eliya, in another case, will have to get a transfer bus or tuk-tuk in Hatton (Hatton).

To get with the comfort and direct, you can order ready-made tourist Shuttle service (taxi) from the airport to Colombo or other places of Sri Lanka by using the search box from Kiwitaxi:

All buses in Dalhousie arrive and depart from the bus station (the station on the map). This conditional bus station, in fact just stop for local buses. In the daytime it always expect buses to Dalhousie and Maskali. From it to anywhere in the village within easy walking distance.

And now more about each of the ways to get in Dalhousie:

Another popular route of ascent is from the town of Ratnapura (Ratnapura), but it is much harder. It is believed that it can climb only the true believers, the pilgrims, after all, have to overcome 2000 metres in height and 8 and a half miles along the route. On the rise necessary to take 8-12 hours, which means that if you want to see the sunrise, you need to start lifting hours in 18 of the previous day. What is good on this route – very few people, i.e. you don't have all the time for someone to overtake or pass, both from Dalhousie.

The climb starts directly from Ratnapura, and from the village Siripuram (Siripagama). Before it, in turn, from Ratnapura can be reached by tuk tuk or local bus for 2 and a half hours.