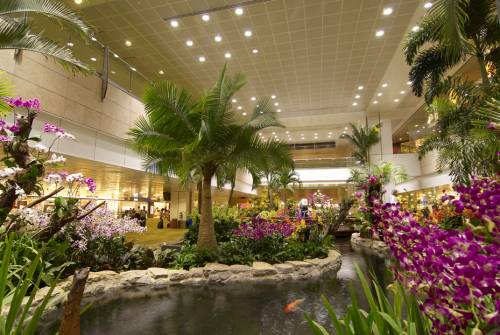 Even if you still have not had a chance to visit Changi airport (Singapore Changi Airport), you likely heard about it as the most luxurious in the world the airport. Today, Changi major air hub in Asia, is the sixth busiest airport in the world, having served over 50 million passengers in 2013 since opening in 1981, Changi airport regularly receives many awards. Now there are more than 470, which is an average of about 14 awards per year, and that is certainly a reason for pride. For the last 26 years the authoritative edition of Business Traveller UK has recognised this is the best airport in the world. Impressive, isn't it? In addition, Changi airport was also named "Best foreign airport 2014" by Conde Nast Traveller Russia and the second year in a row was awarded the "Best airport in the world 2014" by Skytrax. So what is it that makes it so unique and famous all over the world?

Check out the prices on cheap flights to and from Russia to Singapore:

The air gateway to new adventures

First of all, Changi airport is known for the fact that its route system covers more than 300 cities in 60 countries around the world. The airport is an air gate, through which the path to the regions of Southeast Asia and Australia, including popular tourist destinations - Bali, Manila, Jakarta and Sydney.

Changi airport is a unique place which offers over 350 stores with the goods and services for every taste, making the experience of shopping in a pleasant part of the Singapore adventure. Great shopping makes me hungry and it is time to visit one of the 120 restaurants where you can treat yourself to the delights of the local cuisine and various dishes brought from different corners of the world: Chinese cuisine, Indian, Indonesian, Thai, etc. With a huge selection of the only question that can arise will be: "Where do you find so much time to try everything?".

Sweet dreams and a perfect stay 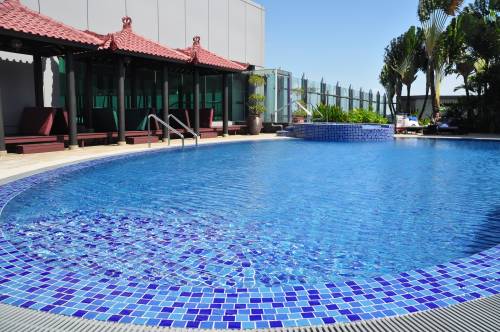 If shopping and trips to restaurants is not for you and you prefer to relax and rejuvenate in anticipation of flight, you will be hard to resist the next temptation. Changi airport invites you to a special relax area, equipped with sun loungers and cushions, where you can take a NAP and forget about everything, of course, except for the time of departure. For the past 17 years, Changi airport received the prestigious Golden Pillow Award as the most comfortable sleeping the airport. Moreover, the airport arranged a special area, such as a unique rooftop pool with views of the runway and a modern equipped fitness centre. Travelers can enjoy a pleasant massage and other treatments such as manicures, pedicures and hair care.

Hour of entertainment for every taste 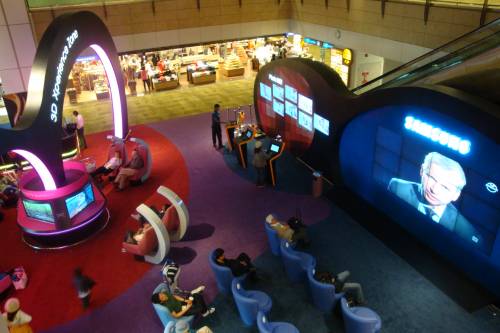 In addition, Changi airport provides plenty of opportunities for entertainment. You are a movie lover, avid gamer, or have never parted with your favorite music? Persistent cinemas, game zone, music corner and a lounge area with TV is just made for you. Or are you a fan of flora or fauna? Then you will be happy in each of the five themed gardens: the Garden of Sunflowers on the roof, the Orchid Garden, Enchanted garden, the Cactus Garden or in the world's first Garden of Butterflies.

A fascinating tour of Singapore

Changi airport offers a free tour of Singapore for those who want useful to spend time exploring the city. The two-hour journey includes visits to the main attractions such as Merion – the symbol of Singapore with the head of a lion and the body of the fish, walk along the waterfront of Marina Bay, "Chinatown" and the area "Little India".

Best airport in the world

Changi airport is able to amaze and impress, even if you are an avid traveler. In this (2014) year Changi six times awarded the title of "Best airport worldwide" according to a number of prestigious awards. Key components of the success of the airport in Singapore – the highest level of service and creating unforgettable emotions from the trip for each passenger.

Comments / recent posts on the topic on the forum
value hotel in SingaporeAndrey.And. 26 October, 2016
And in a place where travel is purchased(as I understand it at the entrance to the subway),there is a break from 16.00 to 17.00? ...
Uninteresting attractions in SingaporePaZan January 1, 2017
You can visit Universal Studios Singapore, it is interesting for both children and adults. Rides very much, and of course the queues are large, but worth it. ...
Security in SingaporekatiaLike 4 February, 2017

Also this opinion was. We clocked it on TV movies. serials and news. ...
Hostelillovova77 30 January, 2018
Good day! I've been in transit in Singapore and probably the same as You are faced with the problem of where to stay for a couple of days!
You know, there is a choice:
-KAWAN street Dunlop
-MITRAA INN RA-n St. near Little India Farrer Park MRT
-Backpacker Cozy Corner, 300 meters from Bugis St
-5 foot way.Progekt Cyinatoun inn 5 min. from the metro station Сhinatown
LINK REMOVED
The choice is yours. Personally I spent the time comfortably! I wish You a pleasant stay!!! ...
Attractionsalexxx February 9, 2018
gardens in Singapore is simply Paradise on earth! ...
visa-free transit in Singaporeadmin September 18, 2018

Of course ...
Singapore. Where to eat inexpensively and how not to get a penalty?nasamomdele 26 September, 2019
In Singapore we had only one day and one night, but it's not enough!
We watched a lot of reviews, which with one voice they all say how expensive in Singapore and you can splurge even just for the food. With confidence declare that it's all stereotype!
In Singapore, a huge number of cafes, restaurants and small street fast food with very affordable prices. Just walking down the street, we stumbled upon a Chinese street cafes with incredibly delicious as was the food. 200R. per person and we were stuffed!
In General, the food in Singapore is absolutely diverse. Indian cuisine, Chinese cuisine, European cuisine and even molecular. This is due to the fact that Singapore is a city of immigrants. As such, Singaporeans simply do not exist. The main population is Chinese, and immigrants from other countries. That's why the food in Singapore is completely different and for every budget.
As for Singapore penalties, all is not so bad. Yes, a huge number of them. But if you're a law-abiding person and not a "pig", then you are not threatened.
kY5xJtjIAUg ...
To reply or discuss the topic on the forum
CONNECT
⌃
✖Календарь недорогих авиабилетов