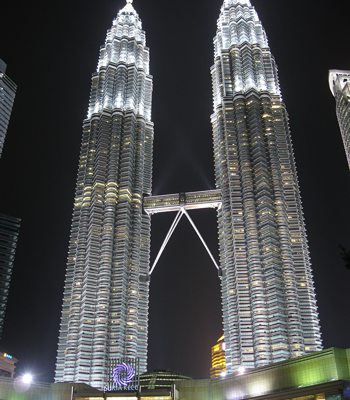 The capital of Malaysia - Kuala Lumpur (Kuala Lumpur), began to grow since 1857 on the site of a small settlement of tin miners. In 1880 it became the capital of one of the Malay States - Selangor, and in 1895 he was created by the British colonialists of the Federation of Malay States. Since 1957, Kuala Lumpur became the capital of an independent state the Federation of Malaya, and later, in 1963, Malaysia. The city's name translates from Malay as "muddy estuary", because of the waters of the rivers Klang and Gombak, which merge in the city and gain from the abundance of silt brown color. Locals call the town for short "Kay-El".

Population (including suburbs) is 6.5 million people and no suburbs with 1.8 million in 2010. The city has distinct areas with representatives of the communities (Chinese, Malay, Indian).

Kuala Lumpur is a modern developed city, while preserving the identity of ethnic communities. Modern architecture the city is famous all over the world ex the highest in the world the twin towers "Petronas", but is not exhausted by it. In the city you can discover many historical and cultural attractions, including modern malls and go shopping in its numerous shopping centers. Kuala Lumpur is also known as the city with the most expensive in the world five-star hotels. Every year it holds one of the first stages of the world championship "Formula 1" Grand Prix of Malaysia.

CL is visited by tourists mainly as a Supplement to the main holiday resorts of Malaysia, stopping here for a day or two. Another category of tourists in KL – "wizardspike" from Thailandto extend the visa-free stay.

The city has preserved its historic tradition and ultra-modern skyscrapers of glass and concrete side by side with ancient mosques, Buddhist and Hindu frames, street restaurants of local cuisine. Shopping enthusiasts can indulge their passion in a huge modern shopping centers in the area of Bukit Bintang, or street markets in Chinatown. Low cost and quality products are a pleasant surprise, especially many copies of the products of the famous brands.

Two days to discover the main attractions of the city, by and large, enough. To stay in KL longer than 2 days, probably not really worth it, unless you want to learn more about the city. Can see our ready-made itineraries for Kuala Lumpur:

On the beaches here don't count: the capital lies 35 kilometers off the West coast.

The tourist season in Malaysia and Kuala Lumpur in particular is all year round. The climate of Malaysia generally Equatorial, monsoon. Average daily and annual temperature fluctuations are small: 25C to 28C.

On the West coast and in Kuala Lumpur the rainy season occurs in April, may and October. In these months the rains are very intense, but short-term, mainly in the second half of the day or night.

Seasons in Kuala Lumpur by months*

Time difference between Moscow and Malaysia (and its capital) +5 hours.

The current time in Malaysia*The time difference with the cities:
* - if time is incorrect, refresh the page Ctrl+F5:

The city of Kuala Lumpur

Interesting attractions in Kuala Lumpur will be enough for few days stay in the city, although all the most interesting sights can be visited in two full days. You should definitely see the famous Batu Caves – one of the most famous Hindu cave temples in Southeast Asia. Also required to visit the Petronas Towers – the symbol of the city and of the achievements of the country. Some tourists even go to KL to take photos on their hike or climb to the observation deck. Another iconic landmark and attraction is the observation deck at the top of the KL tower, incidentally, is higher than the observation Petronas, besides open, and the views from it are even better, including the twin towers. Another popular place, the Independence Square and the historic buildings around it. In addition, in KL you must visit the Chinatown (Chinatown), Central market, Masjid Jamek, National Mosque, national Museum.

Fountain show near the towers

If you come here with children, then you should definitely bring them to the science Museum Perosains where in an entertaining and playful way they can learn about different physical and chemical phenomena. The Petrosains Museum is just huge, many times more than similar museums of Sciences in Russian, so even if there were such places in the house, here will not be disappointed, especially since the price to visit is very affordable. You can also visit the bird Park, aquarium, zoo and entertainment centre, Sunway Lagoon with an aquarium.

Adult fun too, but don't expect too much here until everything is "enchanted" by the locals. The city has many modern night clubs, but the Europeans there would not be very comfortable, because it's not a resort town where discos are created specially for foreigners. So in the evening in KL only have to walk around the market in Chinatown, near Central market, dine in the restaurant or one of the many outdoor food courts with exotic local food. And don't forget in the evening to take another trip to the Petronas twin towers: the towers are very beautifully lit in the evenings and in the Park at their base on lake Symfony Lake every hour is a musical fountain show.

But this is not a complete list, and in KL are still many places worth a visit. Read more about the attractions and entertainment of KL here...

How to get to Kuala Lumpur

The interior of the KLIA airport

Near the TC is the main airport of the country – the international airport of Kuala Lumpur KLIA. It is through him comes most tourists to the country, with rare exceptions. From Russia to Malaysia are not direct flights, but there are many convenient and fast connecting flights through other countries at affordable prices and short flights of 12 hours. In Malaysia, there are several budget carriers, including AirAsia is famous for competing on price with journeys by train or bus, so from other cities or Islands of the country, including the island of Borneo, to travel on airplanes affordable even to budget travelers.

If you prefer to travel by trains or buses, the choice of options is huge. On the ground to drive in KL, you can not only cities, but also from Singapore and Thailand. In some cases, from Thailand I have to change in hat Yai or at the border, but in General it will not be big difficulties. Read more about how and what to get to Kuala Lumpur here...

The architecture of the old CL

Comments / recent posts on the topic on the forum
Re: Kuala Lumpuradmin 4 March, 2019

Hello Eugene! Neither here nor there, and the airport Subang. ...
Re: Kuala LumpurEvgeny Kanev 20 July, 2019
Please tell me airline ticket offices in KLIA and KLIA 2 are easy to find there ? (the diagrams do not see where or) (if in Singapore is not empty,then the ticket is there to buy) ...
Re: Kuala Lumpuradmin July 20, 2019

Hello! Easily find, on the bottom floor down the signs Public Transport or something like that, already forgot exactly how they're signed. ...
Re: Kuala LumpurGenghis 6 January, 2020
Hello! Approximately how much will cost a taxi from KLIA airport to hotel Impiana KLCC? ...
Re: Kuala Lumpuradmin January 6, 2020

Hello! I don't know of such a terminal can talk about the Main terminal, i.e. the main terminal. ...
To reply or discuss the topic on the forum
CONNECT
⌃
✖Календарь недорогих авиабилетов