India is a unique country, where a high level is adhered to the traditions and rules of conduct. Although tourists are usually seen as the honorable guests of the country and ignorance of their traditions are treated with understanding, knowledge of the basic rules will help avoid trouble in some cases, and will make your stay in India more interesting and relaxing.

In India, as in most Asian countries, low level of violent crime. The chance of becoming a victim of such crimes as murder, burglary, robbery are very low. In many large cities and tourist places of India there is a special tourist police. Although the police is no better than the rest, first and foremost, you need to contact the tourist police if only because of the language barrier.

However, India also has the reputation of the country in which it is very easily fall victim to petty theft, fraud, sexual harassment (mostly for women). But fortunately most of the possible problems can be avoided, if not disregarded common sense, be careful and attentive, to respect local traditions and customs.

It should also be borne in mind that in India there are events related to political terrorism, inter-communal and inter-religious conflicts. To avoid them, first and foremost, I will refrain from visiting regions of the country where such events are taking place. It is, first and foremost, Kashmir, Jammu, border areas with Pakistan. You should also avoid visiting Assam, Nagaland, Tripura and Mainpuri, the South-Eastern States bordering Bangladesh. Also in 2008-2009, there were outbreaks of violence in Bangalore , Ahmedabad , new Delhi and Mumbai.

Read also the article about ways of keeping money and documents while traveling. 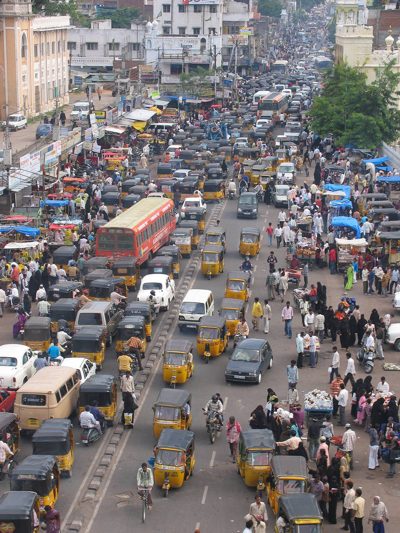 On the roads of India's chaos and mess by our standards. In 2008 on the roads of India in the accident killed more than 118000 people (the largest number in the world), despite the fact that India has one of the lowest figures on the number of cars per capita. Potential dangers lurk everywhere: from unruly drivers who run the car more out of habit than according to the rules, and before leaping into the road sacred animal cows.

To minimize the risk to get hurt in an accident, we recommend that when driving long distances use the train (in the railway system in India is very well developed) instead of the tourist or city buses. If we are without a bus can not do, try to travel on public coaches and not with private kamikaze. Try to use official taxis instead of private owners or the rickshaw.

The idea to rent a car in Indian conditions, the authors website seems to be not very good, but if you decide to would take care of the insurance, including all that is possible.

No better and safer to have and pedestrians. Always when crossing the road look in both and in all directions, even in those from where the transport to appear like and should not.

The level of development of medicine in India, especially private, is very high, and sometimes not inferior to the best world level. There is even such a thing as "medical tourism in India". Tourists from all over the world come to India to do a complicated surgery or treatment for which at home would have to pay an amount several times more. However, there's not much to rely on the cheapness of Indian medicine, and it is better to purchase insurance.

In addition, India is one of the leading places in the world for the production of drugs. In the pharmacies where you can find any medications the most popular brands. Remember, however, that the names of the majority of the Russian medicines of the Indians is unknown, and it is unlikely you will be able to explain to the pharmacist that you need activated charcoal. If you know exactly what you need, then try to say the international drug name in English. If you can't, then try to explain to the pharmacist that you have a headache (even with gestures), and you will pick up what you need. But be careful: a mistake in misunderstanding when purchasing medicines can get very costly. But in any case it is better to pack up the first aid kit at home.

To visit India do not have mandatory vaccinations, but if you are going there for a long time, you should think about how to do some of the recommended vaccinations: Typhoid, hepatitis a, Rabies, Polio, Meningitis.

🕒 May 11, 2020
Before the trip, don't forget
Recommend the best prices for flights to popular destinations:
Comments / recent posts on the topic on the forum
Shopping in IndiaFania August 31, 2019
My mother Saree was brought in, she was impressed. Here the sensibility of relatives depends, and interesting Souvenirs, where, where, as in India full. ...
What animal in India is sacred?Fanie August 31, 2019
The cow is their sacred because transport is their main God. He goes. ...
Journey to the edge of the world, India 2016.Fanie August 31, 2019
India, of course, the country is unrealistic contrast. From hostility to love. Sure there again fly. ...
How often do you ezdiete in India?Fanie August 31, 2019
For all time, only one time did fly. Can't say that much, but not saying. It is very ambiguous impression. So plan another visit. ...
Couchsurfing or a hostel in India?Fanie August 31, 2019
I tried also to stop by the local Cauca, but unfortunately no one responded. Therefore, in the hostel stopped. But to use couchsurfing, the site sign up for Cauca and add your entry with a photo and wait until someone answers. ...
Beggars in India also attraction?Fanie August 31, 2019
I simply ignored, although they met very rarely only because the taxi moved with tinted Windows. ...
Where to go in India?Swallow 11 December, 2019
Interested in this question - they say that in India it is forbidden to move from place to place, what sort of laws it is prohibited. and it seems that all tours should take place only with mestami guides that sort yourself somewhere to go, to go is also undesirable. This is =really? ...
The most popular tourist state of Goa.nausla 11 December, 2019
I have something about children.
When adults go, they are ready for different troubles. Although not all of them.
With babies the same problems can be magnified many times. ...
New Delhi MetroWardon 17 January, 2020
It's simple - the city of Moscow)
I live here, actually. Moved 4 years as from Voronezh.
Remember standing on Vykhino I needed from there to get to something - of course, now I do not remember already where. Wanted to appeal to the woman - seemingly normal self, no different from the others. I don't have time to handle it, she turned and left only “don't know”. All. Of course, I didn't need the red carpet and the bread/salt, but man I just got dumped and all.
And 2 years ago to me the friend came from Malta. Also responded not very much. Says that people, in their shells - everyone is afraid once again to have it touched) But this is my personal observation, and therefore wanted to know from others on this subject) ...
Live in India for 6 years. Want to know the real price?))Pr1ncex 24 July, 2020
We all know that in Asia can sometimes inflate the price even 100 times!) I live in India for 6 years and took the real prices of what things cost. And it is pennies)) https://www.youtube.com/watch?v=ueC5yQP6ZLg ...
To reply or discuss the topic on the forum
POPULAR TICKETS
Bangkokfrom 26 938₽Phuketfrom 31 361₽Hanoifrom 28 863₽Saigonfrom 31 099₽Nha Trangfrom 22 896₽K. Lumpurfrom 28 990₽Delhifrom 23 028₽Singaporefrom 32 473₽Balifrom 33 216₽Colombofrom 33 150₽London3 223₽Yorkfrom 22 600₽Paris8 249₽Romefrom 7 742₽Crimea6 069₽Sochi(Adler)4 198₽Top 100 tickets out of your airport here
⌃
✖Календарь недорогих авиабилетов