Search for tours from the company Level.travel: tours in Angkor/Siem reap 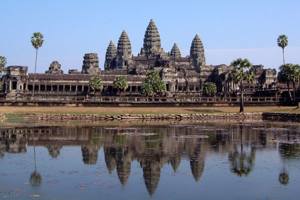 Cambodia is a country of ancient civilization, literally thirty years ago survived the horrors of genocide and violence that the most serious impact on development and greatly influenced the monuments of the past. Today, Cambodia is one of the most promising tourist regions of South-East Asia, attracting tourists from around the world. Tens of thousands of travelers choose tours to Cambodia, to get acquainted with the unique monuments of history and culture of this ancient country.

Siem reap (Siem Reap, also Siemreap, Simrep, Siem reap, etc.) is a town in the North of Cambodia, the main stopping place for tourists to access the temples of Angkor archaeological Park (often referred to simply and mistakenly Angkor Wat). The city was founded in the year of 802, and its name literally means "Siam defeated". This city derived its name in the 16th century in honor of the victory over Thailand.

From a tourist point of view to consider Siem reap as a tourist interesting place without Angkor, not worth it. It is for the inspection of temple complexes of Siem reap is annually visited by a huge number of tourists. Thanks to the Angkor city is very popular and here began to develop the tourist infrastructure. Well, until in the early 19th century, the French explorers re-opened Angkor, Siem reap was simply a village.

Today, Siem reap is a tourist town with lots of hotels, cafes and restaurants, and in addition to the temples of Angkor there are other attractions and entertainment. Close to town, built an international airport ready to receive flights from all over the world. The city's population is 171 800 people (as of 2009). A beach holiday in Siem reap not, and will be able to sunbathe, except that pool.

Find and book a tour to Angkor/Siem reap (Cambodia) online for rent, no extra charge you can using the suggested search form. Moreover, among the proposals meet very interesting and combined tours with visits to neighboring countries: Bangkok and Pattaya in Thailand, Ho Chi Minh city in Vietnam. Some tours include a stop for a day or two in Phnom Penh to discover the capital of Cambodia.

Well, for more tourist information about Sihanoukville , you can get from our site.

Comments / recent posts on the topic on the forum
from Ho Chi Minh city to Siem reap by bus and back.admin December 23, 2016
The only thing you forgot to mention the restriction on the reverse is valid only when visa-free travel, we have about this has long been written everywhere - https://nashaplaneta.net/asia/vietnam/arti-bezvizoviy-viesd-izmeneniya.php. so before you go all read on the topic. ...
Guide to the AngkorKaterina1 25 July, 2018
you on your own or with tour operator but to see the temples you want? ...
In Cambodia aloneadmin 25 July, 2018

Extreme means last ...
What to see in Siem reapadmin 26 July, 2018
minister, why did you publish copied from other sites, text in posts? And by the way, Siemreab no place else.
Questions about Phnom PenhKaterina1 8 June, 2019
useful information. long dream in Cambodia and Phnom Penh to get) ...
As from Pattaya to get to the great wall of China to Cambodia?Katerina1 8 June, 2019
I didn't know from Pattaya so it is easy to Cambodia to get) ...
What to bring to Cambodia?admin 8 June, 2019

If you mean "counterfeit", then Yes, there is a problem. Just look at the quality of the bottles, labels, etc., or buy a cheap local. And so no guarantees there. But on the other hand, theoretically it is safe, because instead of the normal foreign can fill cheap local rice moonshine, and not technical alcohol from the impurities of methyl alcohol production, as in the more developed industrial countries. ...
From Ho Chi Minh city to Siem reapadmin 8 June, 2019

The alternative is to fly. ...
The mystery of the TONLE SAP lakevalentinatseiko 7 July, 2019
Hello. Tell me how I can contact you for more information? ...
General questions about Cambodiaadmin 4 October, 2019

Yes I watch them if I'm there twice drove in and got a visa. Even if you filled out a piece of paper, then surely from a pair of strings, otherwise I would have remembered. Can we do about the usual migration card?
I say to you, hammer. All that is needed. on the spot solve, no problems with it. ...
To reply or discuss the topic on the forum
CONNECT
⌃
✖Календарь недорогих авиабилетов