Angkor Thom: terrace of the elephants 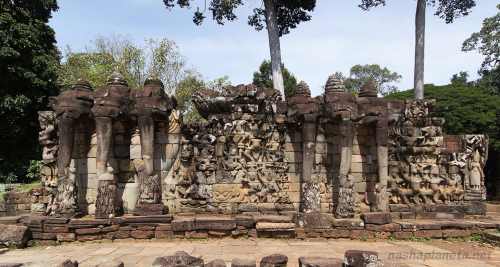 The Elephant terrace (Terrace of the Elephants) is located almost in the centre of Angkor Thom and is directly adjacent to the Royal Palace. We can say that this place was the center of the city. The main purpose of the terrace of Elephants was the fact that she acted as a tribune for the king and his court, and honored guests of Angkor Thom, hence they watched passing at the Royal Palace ceremonies, festivals and other mass events in the city. According to some reports in the add-on to the Terrace housed the Royal hall for the reception.

Dedicated to Buddhism, built in the style of Bayon.

A terrace at the end of the XII century during the reign of Jayavarman VII (Jayavarman VII who ruled from 1181 1220), and supplemented by subsequent kings. Work on the clean-up was conducted at the beginning of the XX century, restoration work of the Terrace – in the 60-70-ies of XX century

Terrace of the Elephants makes a lasting impression with its size, and exquisite images of elephants in their natural size, people, Garuda and other characters. Elephants given, of course, more attention, hence the name Terrace. Of course, this place deserves a visit. 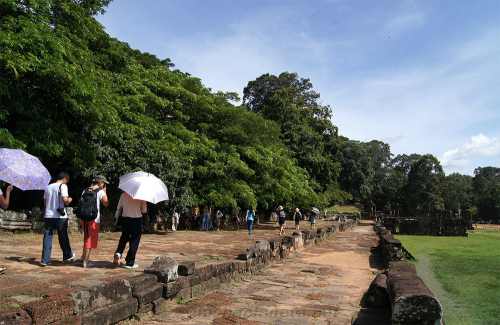 On inspection of the Terraces need not more than half an hour.

The Central entrance on the Terrace of the Elephants is located in the East. To it directly accessible via the road leading through the Gate of Victory. In other cases, to approach the Terrace of Elephants from the nearby inspect objects, given the relatively favorable (center) location of Terraces.

Terrace of the Elephants, the place is very popular, but because there is always a lot of tourists, which make the photos somewhat problematic. A large crowd of people wanting to make a "photo memory" is formed on the upper platform at the North entrance, against the wall with elephants and bas-reliefs. A very beautiful place.

The best time for pictures is early in the morning. 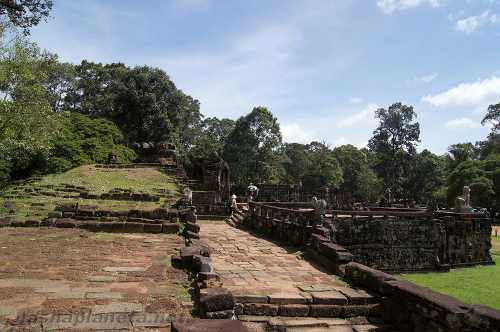 The facade of the terrace of Elephants facing East. Climb to the platform of the Terrace at one of the five ladders (inputs), three of which are larger in size and are the main. On the walls along the entire length of the Terrace of Elephants with reliefs, separated entrance stairs to: on the extreme sections – elephants, on the Central – Garuda. The walls themselves at the base of the stairs framed by the sculptures of three-headed elephants with trunks in the form of columns, gathering bouquets of Lotus, from the top on both sides there are sculptures of lions (preserved not everywhere). Around the perimeter of the upper tier was installed statues of Nagas (snakes), which is a kind of parapet (railing).

The Central entrance is exactly in the middle and has two levels. If you climb these stairs, you walk a little further and deeper then you will find yourself in front of the main entrance of the Royal Palace. The second level of this input is an area where, probably, stands the Royal throne. The walls at the base of this level is ornamented with images of the sacred goose. 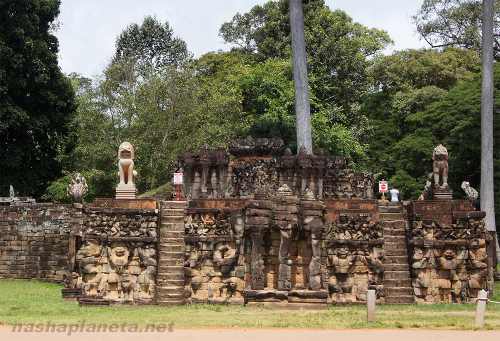 Special attention deserves the Northern part of the Terrace of Elephants. Directly the entrance is accessed via a staircase from the terrace of the Leper King. According to the researchers, in a wooden superstructure there was the reception hall of the king. On the front side this part has in the center the composition of a three-headed elephant, two rows are divided horizontally reliefs with people (above) and figures with the faces of lions (below), two extra staircases, but unfortunately, they are closed for lifting. On the upper platform there is another wall with two three-headed elephant sculptures and bas-reliefs of warriors. Apparently, this wall served as the Royal tribune, which monitored the ceremonies. Behind the podium at stone hill is located a stone statue resembling a bloomed Lotus flower.

On the North wall from the stairs there are images of horses with riders in chariots, dancers, riders on elephants. Some images are divided horizontally into several independent films, some full – height walls.