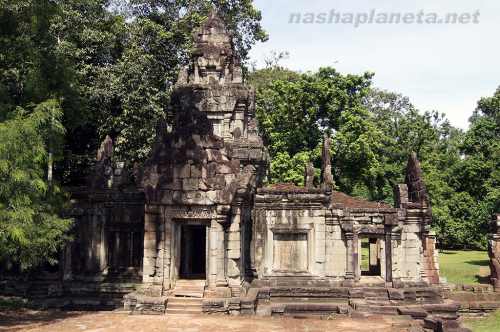 The Royal Palace was certainly a Central figure of the Angkor Thom. It occupied a large area in the North-Western part of Angkor Thom, where was situated the Palace and all the Royal family needed infrastructure.

In the form which is offered to our attention a restored diagram-plans of the Royal Palace, the area was built by king Jayavarman VII (Jayavarman VII, 1181-1220 rules gg.). However, before him there were other kings, in particular, the temple, the Phimeanakas was built during the reign of Suryavarman I (X – XI centuries).

Unfortunately, from the Royal Palace nothing remains as all residential buildings, it was built of wood. Inspect can only be preserved artificial pools, the entrance gopura and located in the center of the temple, the Phimeanakas. I should add: according to scientists in the area of the Royal Palace, was divided into 5 zones. One belonged to the king, this included the Palace, the temple, the Phimeanakas, the pool SRAS SREI; the second, the Queen third, with parks and gardens – of his numerous wives and concubines, the fourth – the personal guard of the king, the fifth for the Royal family (kitchen, warehouses and other households. construction).

Structure (plan) of the area 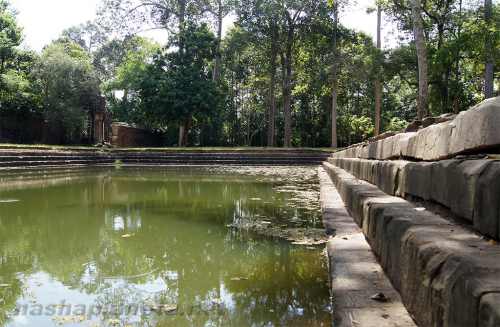 A large area of the Royal Palace has the form of a rectangle with sides 600 m by 250 m. in Addition, close to the Palace grounds adjacent to Terraces of Elephants and Leper King, which also are its integral parts. Around the perimeter of the Palace is surrounded by a double stone wall height of about 5 m, the distance from one wall to the other approximately 25 m. the Royal Palace of Angkor on the map)

The main entrance to the Palace is located at the main entrance of Terrace of the Elephants. This input is suitable road leading through the Eastern gate – the gate of Victory. In addition to the main entrance to the Palace can be accessed through the front gopura at the two from the North and South. Input (Central) gopuram has three towers and two pavilions on either side. The interest here are the inscriptions on the jambs, which means the text of the oath of allegiance to the king (according to some reports - Suryavarman I). The rest of the entrance gopura is a cruciform, with two pavilions, raised from the ground more than one meter.

During the construction of the Royal Palace was used ephemeral materials such as Sandstone, laterite, brick and wood. In particular, Royal quarters and other residential areas were built of wood, and because to date nothing has been preserved. War and other disasters have also had an effect. On land belonging to the king's residence was in addition to the Palace several buildings, terraces, artificial pools and Royal temple of the Phimeanakas.

The best preserved entrance gopuras is considered to be North-West, through which it is recommended to enter the territory of the Royal Palace, followed by visit other attractions. Next, we list the places which are worth a look, in the order they appear from the entrance. However, if you choose another route, you will be able to correct themselves, knowing where and what to see.

So, from the North-West gopura need to go along the wall to the West, where is an artificial basin with an area of 50 m by 25 m. Around this part of the Palace was a female, and because the pool is intended solely for the wives and concubines of the king. If you walk a little further along the same wall (to the West), you can find outdoor cruciform pavilion, it is interesting arranged on its walls with bas-reliefs.

Lurching in the opposite direction (to the East), road leads into the Central part of the Royal Palace to the temple, the Phimeanakas, which is located near the North wall two artificial basins. One of them, and the largest (125 m by 45 m) – SRAS SREI (Srei Sras) to a depth of approximately 5 m. the edges lined with sand blocks and lined with interesting and in some places well-preserved bas-reliefs. This pool was the pool of the king, there was a variety of water views. Near (East of) the second pool is smaller (40 m by 20 m, depth 4.5 m) – it was intended for the Queen.

Near the opposite wall (South-East) are less significant and dilapidated objects, and therefore not of special interest. This cross-shaped Sandstone terrace just to the right of it the ruins of four pavilions, each of which had only one entrance, oriented to the West. Again to the right, and two pavilions, also not in the best condition. Larger in size and resembles the architecture of the library building with two entrances (West and East).

Start with our - https://nashaplaneta.net/asia/cambo/angkor ...
Re: Guide to AngkorKaterina1 25 July, 2018
you on your own or with tour operator but to see the temples you want? ...
To reply or discuss the topic on the forum
CONNECT
⌃
✖Календарь недорогих авиабилетов