Review: Now my favorite Vietnam. part 4 of the Marble mountains

One interesting place we visited during our seven-day stay in Hoi an – Marble mountain.

Mountains are not located in Hoi an, about 30 kilometers away and just a few kilometers from da Nang. First, we looked to buy a tour there at one of the local travel agents, but then decided that it makes no sense to overpay and decided to organize the trip independently. Plus didn't want to adjust to the schedule organized by a travel Agency of trips and manage their time as we want.

How to get to Marble mountains:

We left the hotel about 9 hours. Buses to da Nang leave from the North station of Hoi an, which is a 15-minute walk from our hotel. If someone will repeat our way, then tell me that to determine the place where you want to go very easy the Marble mountains are very visible, just look in the window of the bus and not go wrong.

Views of the Marble mountains from the bus stop 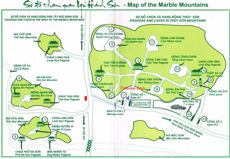 A plan map of Marble mountain

The mountains consist of five hills, each of which you can climb. But the most interesting feature of the hill – the one the biggest. To it we went. Here, on the way to the mountain and at its foot, there are an incredible number of stores and shops for the manufacture and sale of stone products. Everything is here: from small stone chess pieces to large statues that you can buy and can order delivery anywhere in the world. The skill of the stone carvers and the number of their works are simply amazing.

The road to the mountain along the benches

The entrance of the mountains we found easily. At the entrance we paid 15,000 Dong, but also bought a set of postcards for the same 15 000. I recommend to buy cards for memory, you will not regret. With it also given a map of the Marble mountains, which was very useful.

On the mountain, everything was perfectly organized: paths and routes are fenced, there are signs everywhere, there is a toilet, selling water and drinks, places to stay. And drinks are sold without the speculative margins (if only small).

The ascent is very steep, but everywhere you can sit down to relax.

One of the lifts on the mountain

On the mountain, many temples, pagodas, caves, and these monks:

Inside the caves, too many interesting things:

You can climb to the top of the mountain

The view from the top of Marble mountain

View of the neighboring hills

Summary: visit Marble mountain, so if you are in Danang or Hoi an. How to get there and how much it's worth, I wrote, so I hope you will have no problems. Though everywhere on the mountains and made a convenient ladder and climbs, I recommend to wear comfortable secure shoes as beach Slippers to climb quite uncomfortable. To more or less inspect, plan at least 3 hours. Be sure to buy postcards and a map at the entrance for 15,000 Dong. Do not go to the benches at the foot of the mountains, if you are going to buy something, otherwise it will be very difficult to fend off the persistent vendors. If there is a flashlight or cell phone with light, be sure to grab it on the mountain, will come in handy in the caves. Can use the services of "local guides", kids with flashlights (they catch tourists at the entrance), but it seems to me to explore the attraction without them as a safer and freer.

The story about our seven-day stay in Hoi an I finish. Our next point was Saigon (Ho Chi Minh). Went there also on the plane for pre-purchased tickets. Airport in Danang decided to take a taxi in order not to risk a delay on the flight. Taxis ordered on the street the day before departure, just coming up to standing on the street to taxi driver. Conspired to 200,000 VND. The next morning, precisely at the specified time the hotel we drove the car, but not a taxi. Apparently just someone from the relatives or friends of the taxi driver picked us up along the way.

We said goodbye to Hoi an and went in a way...

Other attractions of Hoi an, see here

Comments / recent posts on the topic on the forum
Re: Now is my favorite Vietnamadmin 31 January, 2015

Glad you liked Saigon, I really like it too. But I would be careful with recommendations about "least a week". Still, not everyone will like spending time in a noisy bustling city instead of the beach. Two full days for most of them will be enough, and those who love other people, large cities can linger a little longer. ...
Re: Now is my favorite VietnamFoxa 31 January, 2015
About a week - I wrote that we would like there is so much to be. :) And of course, to each his own! But there are so many museums and the city itself is so interesting that walk-not to deregulate. Next we go to Vietnam no less than 3 weeks. You have a good photo, immediately reminded of our journey.
Jane_M, we too were at the factory where they make fish sauce. Yes, the smell of it is still the same! But it is possible to buy in addition to sauce a lot of good and very tasty sun-dried local fish. It's in Fukuoka. And, by the way, Fukuoka is prohibited to take out this sauce. ...
Re: Now is my favorite Vietnamadmin 31 January, 2015

He googled and found that the earlier airlines in Fukuoka was used ATR72 aircraft, where the Luggage area combined with a passenger. And when the bottles crashed, the cabin was transported "mouthwatering aroma" best Fukuoka fish sauce :SUPER . And then it was forbidden to export. Actually, I always pour the sauce in plastic bottles, when being taken home. So safer and easier without glasses. ...
Re: Now is my favorite VietnamFoxa 31 January, 2015
I didn't know about the true reasons for the ban! :) Now I know!
And we are from Vietnam brought a local ground coffee and bought them special cups with lids and filters for brewing.
Here, too, by the way, advice to those who are going to Vietnam and thinks that you can bring out there simply amazing coffee! I'm not a fan and not a coffee-drinker, but the Vietnamese coffee will never give up. :) ...
Re: Now is my favorite Vietnamadmin 1 February, 2015

Yes, Vietnamese coffee is one of the best in the world, IMHO. ...
Re: Now is my favorite VietnamSaulina March 25, 2016
Uhh posomtrel photo, already longing attacked! ...
Re: Now is my favorite VietnamCenika 20 September, 2017
I have a holiday to Vietnam is only the most positive memories and emotions. Oh, the beautiful beach of Nha Trang, we were here in June, rested perfectly. For travelers chose the hotel Den Long Do Hotel, the conditions are excellent, the service is good. Of the trip brought a bunch of Souvenirs and delicacies, in particular, found the shop "Alco House", where he bought the local bottling alcohol in bottles that you can carry in the airport. Loved the nature and the hospitality of the locals, sightseeing and culture. ...
Re: Now is my favorite VietnamKaterina1 April 30, 2018
the class is also very want to Vietnam, but confuses that far) ...
Re: Now is my favorite VietnamSvetik2244 8 July, 2018
I in that year it was unreal cool! ...
To reply or discuss the topic on the forum
POPULAR TICKETS
Hanoifrom 26 884₽Saigonfrom 27 626₽Nha Trang21 428₽Danangfrom 31 722₽Phu Quocfrom 26 540₽huefrom 36 690₽Dalatfrom 38 578₽Bangkokfrom 20 584₽Phuketfrom 25 242₽Samuifrom 36 490₽K. Lumpurfrom 24 788₽Langkawifrom 32 570₽Singaporefrom 29 121₽Balifrom 32 099 for you!Goafrom 19 343₽Colombofrom 26 054₽Top 100 tickets out of your airport here
⌃
✖Календарь недорогих авиабилетов