A review of the trip to Malaysia "exploration". The Island Of Penang

In Penang we got a AirAsia flight in about 30 minutes.

Penang airport was repaired. Our entire procession from the flight even initially overshoot the desired floor of the arrivals hall up the stairs and almost out the roof of the airport.

From the airport to Georgetown, reached by city bus No. 102 for 4 ringgit. There are other buses from the airport, this is written in detail in the article "How to get to Penang?".

The Hotel Mingood chosen specifically in George town (the island's capital and the state) to be in the middle of it. However, little was wrong with the location and had quite far to walk to the nearest bus stop. Next time we will choose a hotel closer to the Komtar.

Here it is, the tallest building of the island, and here the state government is the main shopping center and transport hub of the city and Islands. Transport hub in the sense that the base of the tower there is a bus station through which almost all bus routes of the island.

The view from the window:

Penang was the place we were supposed to be. That is, let the goats in the garden. Liked it very much because it was very interesting.

From idea to rent a bike we immediately refused as soon as I saw the traffic on the roads. Driving from the airport to Georgetown on the bus almost through the whole island, I immediately became clear that with this move I won't cope. Of course, in remote areas of the island movement is much calmer, but we were meant to be in the thick of things... and what's with your transport, if the bus can get anywhere, the taxi is waiting at every step, and the city can be explored on foot.

Ride with the locals on the bus I liked: feel at home there. And, oddly enough, none of the locals staring and did not pay any attention to the tourists standing in line at the door of the bus. Bus drivers have always helped, announcing to us the correct stop.

In General, the public transport system in Penang is just great in my opinion. Everything is very convenient and quite understandable if you know anything about maps. Maps of bus routes, by the way, you can get free in several places. More information about public transport in Penang I have written here is all there is and if you read carefully, the questions you'll never.

Inside the bus. During peak hours they are "Packed":

Yet many times we used the free tourist bus MPPP, but to be honest, he's not much help to us: in peak hours (evening, approximately 16 to 19) they travel very slowly and are chock-full of local, so might even have to hang on to the handrail. In most cases it was faster to get out and walk to the right place. Although, all the same, a few times they were useful to us.

Of course, at the time of our stay on Penang, we not only wandered around the city and looking for landmarks. One day made a sortie on the beach of Batu Ferrighi. Rather it is not just a beach, but a typical resort town. Parallel enough the long beach is a road and a lot of hotels, cafes, restaurants, shops. In General, all that you need for a beach vacation on the ocean. But no sights.

The beach did not disappoint, even after the beaches of Langkawi. It is a decent, uncrowded, clean and very long.

Although, well, how to say clean... Clean, but that's what I found... a Huge dead fish in the water, and smells from her about 20 metres.

Still don't understand why it is said that in Penang there is no beach holiday. There he is! I bet.

Stop at every attraction we visited and saw, just no strength and desire. So many things I saw and visited. So here just some pictures. Details about sightseeing Penang can be found here, and here are a few photos of Penang.

Want a little more detail on our trip to Penang Botanic gardens (Park). Arrived from Komtar bus 10. The ride is quite long, and the buses run often. So if possible, better to take a taxi. Walking there from the city center is not accessible, though it is believed that this city Park. The Park is great, and if time permits, be sure to go there.

Yet there we were attacked by monkeys when we tried to get closer to them to photograph. But fortunately, not bitten (see how to behave with monkeys, precautions).

But arrived at the Park we are not only to admire the greenery. The Park is situated at the foot of Penang hill, the highest point of the island. From the Park there are several points to rise to the top via trails and a paved road on which the top can be reached by jeeps. The cost of lifting the jeep cost like 50 ringgit. Rail road to climb to the top at that time was under repair or reconstruction, and the beginning of it is not in the Botanical Park.

In General, we came to the Park in order to walk to the top, and to do so not on the road, and on footpaths. And it so happened that we picked the right entry point and climbed another hill. The fact that we made a mistake with the road, I realized only when risen nearly to the top (about 2 hours) when I saw near his mountain even higher.

In General so confused. So if you want to climb to the top of Penang hill it, be sure to check with Park officials, where the beginning of the climb. Although our hoist is very nice also.

On the way back from the Park dropped by the Thai and Burmese temples. They are located opposite each other across the road. Very beautiful and interesting temples. 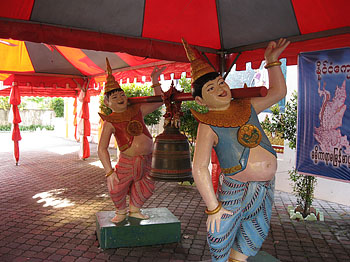 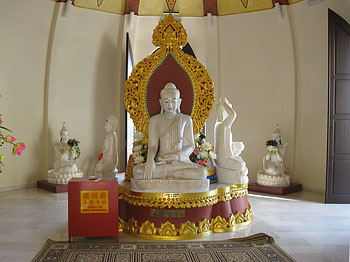 The Burmese temple was more interesting Thai. It even has an Elevator.

But donations from visitors are inventive ways. That's rotating on the podium bowls with inscriptions of wishes it is necessary to throw coins. Quit until fall. Everything in the bowl did not get, apparently the monks and then collected from the bottom of the pool, well, and from hour rake, of course. 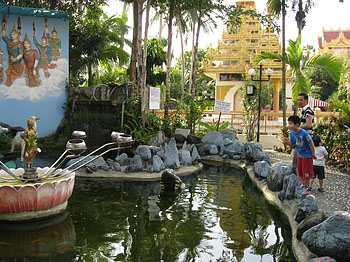 And there saw the monk-European:

And I was somehow "hooked" the old European cemetery. It is almost never marked on maps and guidebooks, and we found it by accident the next time you walking. The Malays it carefully cleaned and restored. Why would they do that? They did a great job!

And there saw the monk-European:

In General, about how we spent in Penang four interesting and intense days.

The next stop on our journey was to be Kuala Lumpur, where we got on the train. But trains are really not Penang, and they are sent from the station to the nearby town of Bachellors where we sailed on the ferry. But that's another story, which I wrote in detail in the article "Trains of Malaysia".

Ahead of us waited the capital of Malaysia - Kuala Lumpur.

Comments / recent posts on the topic on the forum
Common questions about Langkawiadmin 30 January, 2019

Hello! I don't know of such a terminal can talk about the Main terminal, i.e. the main terminal. ...
To reply or discuss the topic on the forum
CONNECT
⌃
✖Календарь недорогих авиабилетов