One of the most convenient and quick ways to move around Kuala Lumpur is the metro. Many tourists are afraid to use it, believing it too difficult, and easier to take a taxi. Maybe do a taxi easier, especially if you plan to stay in town for the day. But, if you want to stay in the city longer and not go broke, best subway to find nothing. In addition, while the taxi will be stuck in traffic jams, in the subway, you quickly fly over the congestion. That is why the hotel in Kuala Lumpur we recommend you to select close to the metro station, and it is best to metro station LRT.

In metro Kuala Lumpur everything is organized simply and logically, and use it even without knowledge of English. We have prepared detailed information for the lucky ones that happen to be in Kuala Lumpur. Below, read about what types of rail transport in Kuala Lmpur how and where to buy tickets and use them where you can get everything else on the subway.

Kinds of metro in Kuala Lumpur

Below about each kind of subway you will be able to read more.

A very handy interactive diagram of all types of metro is on the site http://www.myrapid.com.mybut, unfortunately, it is not printed or downloaded. Download and print a metro map here (click on the image to enlarge in a new window)

Our interactive map of Kuala Lumpur we have placed in our view the most important stations from a tourist point of view, and here is their description.

Inside of the metro (stations) schemes are everywhere.

While working underground in Kuala Lumpur

Prohibitions and safety in the subway

And the penalty for violations as stated in the caption below - 500 ringgit, which is about 5000 rubles! Everything is controlled by cameras, and the security service are not uncommon. 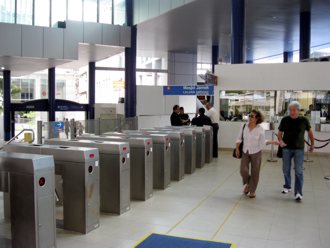 Access to platforms of all types of underground organized with the help of tickets, in the form of plastic cards. They are sold at each station at the ticket office or vending machines (the vending machines accept coins).

There are one-time, cumulative travel tickets, and for each metro your own. On each of the tickets section for more about each metro.

In General, the cost of travel for all types of metro depends on the length of the trip (for one-time and cumulative tickets) and changes from station to station. When buying you have to call at the ticket office or machine to specify the start and end station of the trip, and pay the amount. If you are travelling from the station where you buy tickets, enough to call the cashier the name of the destination station. If you don't speak English, can you show the cashier the name of the station on the map or a piece of paper, well, the price too will get on the paper, because the numbers are the same everywhere.

Control of tickets at the entrance to the platforms and exit. If you get off at the wrong station, the turnstiles will not let you, and will have to go to the desired station. To cheat will fail. 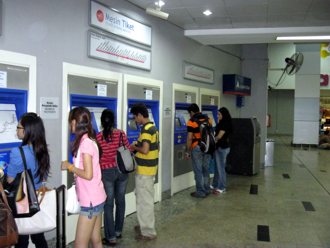 Tourists it is cheaper to use single tickets and not bother. If you expect a lot of scrolling, reasonably could be funded or a single pass. Cumulative tickets are bought for each metro separately, but a single pass Rapidpass Integrasi valid for LRT, Monorail and bus routes. The cost of a single pass: for a month – 150 ringgit (RM), 15 days – RM, 7 days – RM50, 3 days – RM25, - for 1 day - RM10.

A single pass you will not be able to use for the passage of two persons! Need to buy everyone their own travel. 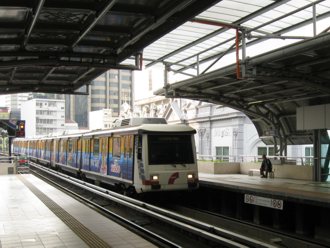 This is the most popular and most practical type of station in KL, and it is likely that they you will have to use in the first place. By and large, if you decide to stay in KL for a few days to get acquainted with its sights, this type of transport, supplemented by a single trip to Batu caves on KTM commuter trains Komuter, you should be enough.

LRT consists of two lines Ampang Line and Kelana Jaya Line. Ampang Line at Chan Sow Lin station is divided into two lines, so many sources indicated that there are three lines, not two. Although officially they are still only two, just one forks. A large part of the metro is laid above the ground, only 4 of the 49 stations are below ground. Metro trains operate without drivers, under automatic control, so you can safely go in the first or last carriage and make great shots while moving.

Both lines intersect at Masjid Jamek station and start/end at the same station – Putra Heights. Through the main transport hub of the city - KL Sentral station - is only the Kelana Jaya Line. 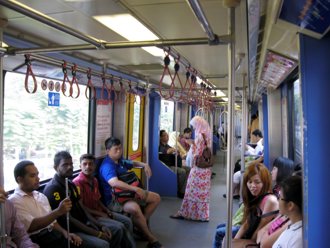 The LRT without limitation acts of a single travel Rapidpass Integrasi. Travel only LRT line is: for 30 days – RM100, 15 days – RM60 for 7 days – RM35. Tickets are cumulative for each line separately, and the total on both lines. Single tickets cost a maximum of RM2,5 when traveling in one line, and a maximum of RM5,1 while traveling through both lines (the new MyRapid Card for RM10). But not zamorachivayas travel and storage, if you are here for a few days, buy single tickets. 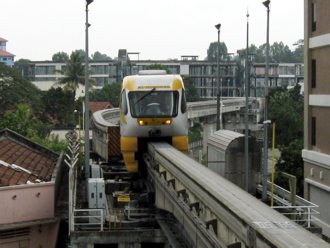 The monorail in KL consists of only one line passing through the Central areas of the city (Brickfields, Bukit Bintang and Chow Kit). The line includes 11 stations, originating at station KL Sentral.

Very convenient on arrival in KL from the airport or train station KL Sentral to get to the monorail station Imbi, Bukit Bintang or Raja Chulan, located near the Bukit Bintang district, which is the majority of cheap hotels Kuala Lumpur. If you choose to stay in Chinatown, then you need to drive from KL Sentral, two stops to the station Maharajalela and you will go nearby (400 metres) from Chinatown.

Using the monorail is no different from conventional metro: they are the tickets, turnstiles and platforms. Trains run on two rails (each in its own one), towards each other.

For transport you can buy single tickets, savings tickets or a single ticket RapidPass Integrasi. When you buy a cumulative ticket for travel along the monorail (there cost RM20 or RM50) you get the full last ride regardless of the balance on the ticket (at least RM0,1). The cost of travel when using one-time or cumulative of tickets from RM1.2 to RM2.5 depending on distance. 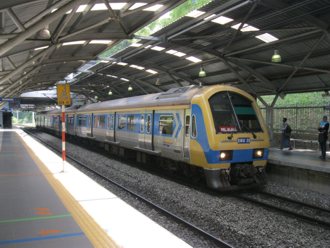 This form of transport – almost the same as our commuter trains. To get them to the suburbs of KL and to some neighboring cities of the state. You can also move within the city, but there are trains infrequent (every 30 minutes), so use them to move around the city, we do not recommend.

Commuter trains consist of two lines passing through the center of the city (station KL-Sentral) and extend far beyond it. For the purposes of tourism of particular interest is the line Batu Caves-Port Kelang (formerly Sentul-Port Kelang). First, you can get in/out of port Kelang, and secondly, you can get to the famous Batu caves (Batu Caves), if you go to the final station, Batu Caves KTM Komuter station to Batu Cave direction (the station is literally a few dozen meters from the cave entrance). The fare KL-Sentral – Batu Cave – RM2. The other tourist use of local trains we have found. Scheme, schedule, value can be found on the website http://www.ktmkomuter.com.my/. Our General scheme for printing routes and commuter trains, are also shown.

Access to the platforms is exactly the same as on the subway, through the turnstiles for electronic tickets. Tickets are sold at all stations. 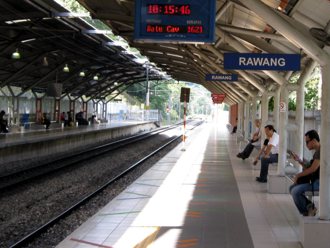 Keep in mind that the same station can make the train stop on different routes. Different trains stop at different places along the length of the platform. Not to miss the desired train, expect it in the appropriate part of the platform, marked with a sign (see photo).

In the train there are "pink carriages" (marked with pink labels), designed for women only. Men travel in them is forbidden.

Trains to the airport (KLIA Express or KLIA Transit)

These trains are designed in the first place, in order to quickly and conveniently reached from the airport in Kuala Lumpur to the city and back. This is the fastest way to get to the airport. In the city you aren't going anywhere.

There are two types of trains: KLIA Express and KLIA Transit. Both trains provide connection between the main terminal of the airport and KL City Air Terminal (KL CAT) at KL Sentral:

You can pre-buy an electronic ticket on a train here https://www.kliaekspres.com/. Payment by Visa or Mastercard.


Information on other types of transport and ways to travel around Kuala Lumpur see here.

Good luck with traveling and not getting lost in the intricacies of transport Kuala Lumpur!