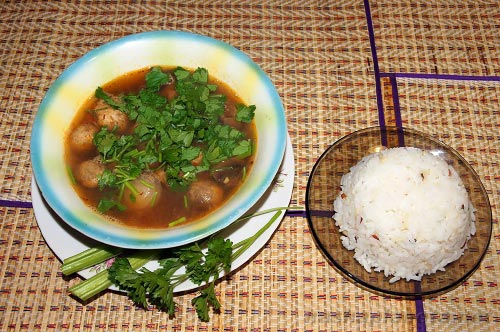 Who was in Thailand, he must have tried the famous Thai soup Tom Yam. If you've been to Thailand and have not tried Tom Yam – it means you have not been there, and you have to go there again to taste the Tom Yam. This is the most spicy soup in the world! As some sources on the Internet, despite the sharpness, it is very useful and even has the ability to prevent cancer, and it is because of him Thais so rarely suffer from this disease. Like it or not, we don't know, but this soup is so popular in the world that it even has its own fan clubs.

Tom Yam soup is offered in every restaurant and cafe Thailand, as well as many cafes and restaurants in the other countries of South-East Asia. Each chef prepares it individually, adding one, then the other included ingredients, in greater or smaller numbers, adding coconut milk or without it. There are several varieties of this soup depending on the ingredients:

Despite all the exotic Tom Yam is quite easy to prepare and Russian cuisine, and as will be discussed below. However, it is necessary to say that if you have never tried Tom Yam in his homeland, i.e. the real Tom Yam how to cook it in Thailand, it will be very difficult to cook it yourself. Just try it at home you can successfully prepare yourself for what you will need in the cooking process to try different ingredients and their proportions to get its true taste.

The basis of the soup 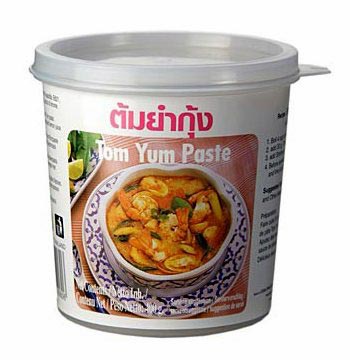 Tom yum paste in a jar

Most importantly, as in all Thai food – quality ingredients. The basis of soup is a spicy chili paste for Tom Yam soup, which you can do yourself as described below, or you can buy ready. In Russia a paste to get can also be bought via the Internet. Sometimes bags of pasta fall in the major supermarkets in the departments of spices and Oriental cuisine. In the countries of South-East Asia, the pasta is sold in almost every supermarket in bags or large pots. Banks usually clean the dishes, and packs something of a semi-finished product, which has already added additional aromatic ingredients – galangal, lemongrass, kafir. To store bought or your home-made pasta in the fridge for a very long time, up to several years, although at long storage loses its taste.

On packages, from the reverse side is written the method of preparation (sometimes with English translation), but it is different from the soup with the usual pasta. If on the package there is no translation, and all written in an incomprehensible Asian language, then just prepare the soup following the recipe, and is cooked pasta, add pasta from a package. Just be careful with the addition of soy or fish sauce, because the packages are already quite a lot of concentrated fish sauce, and you can just oversalt the soup.

The hardest part of the preparation of Tom Yam soup in the Russian cuisine to find all the ingredients, because most of them exotic. But today most of them can be bought in large supermarkets, to order something over the Internet. Some products can be replaced by a more familiar and common in our stores. So, here's what you need to prepare:

As you can see, the ingredients are quite specific, but they can be replaced. Of course, the replacement will be in favor of improving taste of food, but it is the place to be. The original ingredients you can bring out of Thailand or neighboring countries in Southeast Asia, where they are sold in local markets or in supermarkets. Prices are there just a cheap (1 kg of lemongrass on the market, for example, costs $ 1-2).

If you did not buy the original paste, you can make a paste yourself. For our taste, it is absolutely not inferior to the purchased in Asia, is that only sharpness.

Important! Take precautions when working with pepper and ready-made pasta: do not RUB your eyes and delicate skin, thoroughly wash the dishes.

For the pasta you need:

Pour into the pan 3-4 tablespoons of vegetable oil (as cooking pasta, you can add more oil if you feel that the paste is too thick). When the oil heats up, throw 4-5 cloves thinly sliced garlic. Garlic needs to obzharitsya until Golden brown. If the oil is hot enough, then it will take literally a few seconds. Fish out the garlic from the oil and place it separately.

Then in the same oil toss 1 medium head onion, chopped shallot (or onion). It is also necessary to sustain until Golden brown, then catch and put together with garlic.

Again in the same oil add 4-5 pieces as small as you can chopped chili peppers (it is recommended to clean the peppers from seed, but for pasta Tom Yam pepper seeds are not cleaned and are present in the paste), a bit dry it in the oil (about 1 minute), and then add to the pan previously fried garlic and onion. You can also add grated ginger, but again, the ginger is not mandatory and will be added in the preparation of soup. Hold a little more mixture in the pan stirring constantly (don't forget to add a little oil if the mixture is too thick), the Deputy remove from heat, and grind everything finely in a blender or other way (keep in mind that the Cup of a blender will have to wash, then many times). The pasta is ready.

The paste should be thick, not to spread and not run off the spoon.

Cooked pasta does not deteriorate and has a long shelf life in the refrigerator.

Start cooking the soup (two servings). When cooking you should constantly try dish as cooking and add ingredients as needed. Just so happens to achieve the perfect taste.

Do not worry if you do not succeed the first time the same soup, what have you tried in Thailand, but try, experementiruite, change the ingredients, and then you will succeed.

And finally a little secret: cooked pasta can be used not only for soup but also for other spicy dishes, or even just to add in ready meals, for example in noodles, to give them a sharpness.

Now, if you learned, you can watch the video about how to cook Tom Yam from the original ingredients, and then go to the kitchen:

🕒 May 11, 2020
Before the trip, don't forget
Recommend the best prices for flights to popular destinations:
Comments / recent posts on the topic on the forum
Re: Recipe for Thai Tom Yam soup (Tom Yam)I March 30, 2014

Also saw these sets on sale, now they are often in supermarkets to see. But not bought, because I prefer to do my recipe of the original products brought from the "homeland". Nevertheless, in my opinion, the main thing is-Yam - hot and sour soup, and the composition added to the dish products are not so important. Therefore, if these sets have pasta cake mix or bouillon cube Tom yum, they have to conform. ...
Re: Recipe for Thai Tom Yam soup (Tom Yam)Tussy August 7, 2018