Kuala Lumpur is a great city. It's all that useful I wanted to tell you about Kuala Lumpur, and now more about useless.

If you think Kuala Lumpur is an expensive city, then at least wrong in one thing – it's expensive, but not everywhere and not all.

Perhaps the most inexpensive Chinatown. I bought a wonderful t-shirt for... 50 rubles. And this is a normal price.

The area is very interesting and original, it is a very picturesque entrance.

Now tourists in Kuala Lumpur hand over the good seats at the rate of ringgit against us dollar and Thai baht I found the following exchange, perhaps there are better, but beating near and not the nearby banks, I was convinced that to change the money necessary here. This place is right of the gate, which on the previous photo. The exchanger in the middle :

This is the everyday life of Chinatown in Kuala Lumpur

But Chinatown is not always what it may seem occasional tourist.

The last three pictures shot from the same point at different times of the day.

But there is one place close to Chinatown, where Souvenirs are even cheaper and their selection is huge. If you want to buy Souvenirs, of course. Central Market. The sellers hang signs No Cameras – as if guarding a secret government facility.

Still there can be a good civilized way to eat. The prices do not bite – to me they seemed quite a bit higher than in Thailand.

Next to the street, reminding Pushkinskaya in Rostov or the Arbat in Moscow. Well, just a very poor version of their

If you need cheap equipment in Kuala Lumpur, it is you in Low Yat Plaza. But in fact there is not really that bad and cheap. Went traded for less iPad 22000 rubles did not work for 16 GB model. Was hoping for a great similarity with the American prices. Camera down for about the same price as in Bangkok, but given that Malaysia is no 7 cent tax. More expensive models significantly cheaper, but checked only on one model.

Rain here – it's time to try the monorail. A ticket for the monorail costs the same as subway, but had to buy a cashier, as a machine at the station is not found.

But it was the reference machine from which I found that value on the next station 1.2 ringgit (12 rubles), and on any of the following 1,6 ringgit (16), which is a strange way of pricing.

But the place – almost like in Moscow metro, unless all the civilized and there are special people that monitor the occupancy of the train. By the way, unlike metro – monorail have a driver.

And here is the information for drivers about where the tubes (inaccurate, can anyone clarify)

But it was the living machine, and like you the graveyard of cars and motorcycles!? "That's tough!" – I blurted out the words were true in the literal and figurative sense

Generally it would be necessary to say that Malaysia is like obsessed with football – before the start of South Africa world Cup and they were covered with football fever, but as the national team of Malaysia is not particularly shines on the world stage, then Malaysians are the paraphernalia of other teams. Every self-respecting shop has a area here: 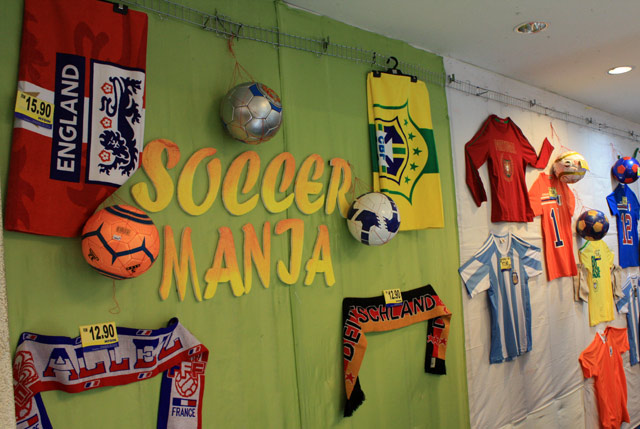 In connection with football fever in the evening, it was decided to look at the stadium Merdeka, where disgracefully playing for the national team of Malaysia, but there was a repair, apparently in connection with the world Championship decided to patch up the arena:

Not particularly upset, not at the Nou camp did not hit.

In the next photo my super modern talking GPS Navigator:

Information kindly provided by the authors of 4 in Tae

🕒 January 11, 2020
Before the trip, don't forget
Recommend the best prices on flights to Malaysia:
Comments / recent posts on the topic on the forum
Common questions about Langkawiadmin 30 January, 2019

Hello! I don't know of such a terminal can talk about the Main terminal, i.e. the main terminal. ...
To reply or discuss the topic on the forum
⌃
✖Календарь недорогих авиабилетов