This page is automatically created by the automated computer text translator, and originally written in Russian (Переведено сервисом «Яндекс.Переводчик»). The original version of this page in Russian is located here. We are apologize for any possible inaccurate and incorrect translation of certain phrases and expressions below.
POPULAR TICKETS
✈ GMT-Kuala Lumpur ⇄ 30 795₽✈ GMT-Langkawi ⇄ from 39 037₽✈ GMT-Penang ⇄ from 39 910₽✈ GMT-Kota Kinabalu ⇄ from 44 650₽✈ GMT-Singapore ⇄ from 33 875₽✈ SPb-Singapore ⇄ 41 180₽

About the end of our journey already write from home as to spend time on Tioman island – it was simply blasphemous!

And so, our hotel on Tioman island turned out great!

A view of the hotel from the ocean (or, more correctly, sea...)

Probably because we have long wandered Malaysia, someone at the top we decided to make a gift, as the room we got 1 out of 4 available, located on the beach!!! Lying on the bed and through the window you see the beach and ocean!!! And in the evening sitting on the balcony with a glass of wine watching the sunset!

The view from the room

Airport and baggage was surprising.

At the exit of the airport were paid RM5 per person for a visit to the island reserve, we were met by 2 of the bus "without Windows without doors", which loaded in my opinion, everyone flew and drove to the hotel.

Transfer to the hotel

We arrived at the reception where immediately we got the room keys. Next, we loaded into another firstly, and drove to our room, even though going there was 3 steps...

As the time was already dining, we went to eat in the hotel restaurant. Ordered a soup, mashed potatoes and something else I can't remember (32 RM), then flopped in the pool at the bar and ordered 2 tequila shots (my husband) and "Black Russian" (for me) – 69 RM for everything.

By the evening decided to go to explore, where to eat. Went to the Dytiki bought wine (1.5 liters California delicious wine – RM 42), ordered in the cafe, right outside of the hotel, fish in the reach (RM 7 per 100g) and salad, and went to our balcony room, to celebrate the arrival and to watch the sunset.

The next morning went to this cafe to buy some Breakfast as Breakfast was not included, and if paid separately, that is "fun" in the hotel cost RM 45 per person per day!!! As it is clearly too much!!! In the cafe I bought 2 scrambled eggs with onions, each 2 eggs + 4 awesome delicious local cakes (called Chanai), paid for all of about 20 RM, and the room that we all happily ate, along with tea and coffee left daily in the room.

For lunch I went again into the restaurant, ordered 1 salad and 1 national soup (RM 41 for all – making a difference with the prices of cafe).

- Took a walk along the beach to the dive centre, ordered diving the next day (for 2 dives – 240 RM on the price, which include in the total hotel bill at check-out) but when calculated, why it was cheaper – 212, RM.

- Then floated with a mask to the island, opposite the dive centre. To the island you can take off on their own, it is 700 metres to go and from dive centre on boat round trip + fins-mask RM 40 per person. We rushed on their own, a couple of times explode around the island.

Neighbouring island (700 meters from the shore)

Beautiful fishes, even sharks met. The only "minus" of this trip – burnt our back and legs from behind, despite the fact that before the swim we anoint the cream.

On the way back, booked in the hotel "tour Around the island by boat" for RM 120 per person (same price outside the hotel, so we can stop looking for cheaper, you will not find). Can this trip be booked individually, going by boat only my posse, - RM 550 per boat to no more than 6 people.

Diving Taimane disappointed us in full! Not only that, those dive sites that we dragged, was not particularly attractive (especially the second – cemetery of dead corals :-( ), and dive guide we came across – a complete moron! First, he led us over to a place where there was nothing special, and the completion of the dive, decided to take us in a beautiful place with a lot of passes among the rocks, against the current, when the air force and we were already on the wane. As a result, the most interesting thing we failed to consider fully. On the second dive our guide really took out :-( If under water could speak, he would have heard from me about yourself even what he did not know!!! He was again high at first to float us downstream, and in the end to make the puff against the tide... While he managed at the beginning of the dive to hang out behind a rock, forcing us all to abut against the tide that would hang in place. I was so mad, where are we going, why, what course – is unclear! I spat, and invited the husband to forget about the guide and go together, the benefit of a small island, and wherever we came from the water, from the boat we will not lose, which we did, but then the guide decided to go with us.....In General, diving is worse than this time, we have not had even once :-( It was 2 dives on the island of Labasa......

The next day was a boat tour around the island (from 10 to 15). Who will go, don't forget to take a protective cream, towel, money and water, as it's NOT included in the tour, as well as the food in the cafe when you stop on the island. During the journey is 5 stops:

2nd- somewhere in the lagoon, to snorkel with

The hotel on the other side of the island...

5-I – just from the little island opposite our hotel.

In General, the rest of the island was Paradise! But to rest on it for more than 7 days, I think it will be boring, so like to go and watch there nothing more. On the island, one road, 8 km long, and leads it across the island to Juara Village on the other side of the island. As I wrote earlier, we are very lucky not only with the hotel room, but with the phase of the moon, as the time tides had on the night and the tides there – be-here!!! 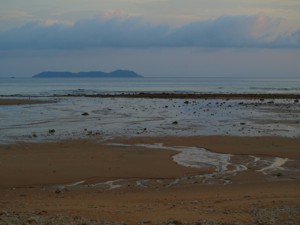 By the time we left, the tides began to move in the morning, so you need to be prepared for the fact that you can get to a time when swimming in the pool or swim to the island. Go home not wanted. As always, not enough for another 2 days :-) However, the vacation came to an end, and tickets ordered.

We departed from Tioman to KL at 15.00 and the home of KL was flying the next day, at 10-10, so needed a place to crash for 1 night. The hotel booked closer to the international airport.

Got to the airport, Sultan Abdul,

We ate at a cafe at the airport (local cuisine) for 25 RM. On the car for 80 RM (first asked 120 RM) arrived at the hotel in Kuala Lumpur SEPANG BUDGET HOTEL (kopeck piece). Though nothing, clean, tihenko. It's very convenient to the airport, no traffic jams, and by the time 15-20 minutes only. But before it we traveled for over an hour! Such promise circle, and the distance is not close at all! From the hotel to the airport is 65.4 RM on the counter. I think that if you go without a meter, will be 2 times cheaper, but we ordered the car at the reception, as we arrived late evening and left early in the morning. The road back from Uzbekistan Airways was held in the airplane is a little more, but people this was a plane! In the transit area was opened the restaurant "a La eatery of the USSR", where I bought 4 bottles of the "Golden Bukhara" (8 $ for a bottle), which was served on the plane. Flight is not detained, and docking was only 3 hours, as expected. Flights Tashkent - Saint-PETERSBURG also went in a completely filled plane.

The last straw was the passage of a customs in St. PETERSBURG on arrival :-( In all countries, there are customs offices for residents and non-residents in our country until then, it seems, is still not Mature enough, or maybe just respect for their citizens in our country are completely missing :-(We had to hang around in the queue-the flea market, together with our Uzbek friends, which is about right don't know nothing at all, about 30 minutes...... Then I had to go through the x-ray machine at the exit of the airport to the city.....

🕒 May 16, 2020
Before the trip, don't forget
Recommend the best prices on flights to Malaysia:
Comments / recent posts on the topic on the forum
Common questions about Langkawiadmin 30 January, 2019

Hello! I don't know of such a terminal can talk about the Main terminal, i.e. the main terminal. ...
To reply or discuss the topic on the forum
⌃
✖Календарь недорогих авиабилетов