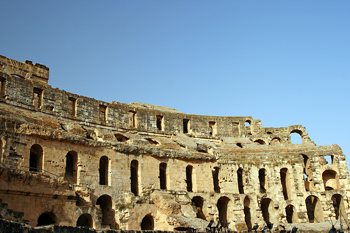 The amphitheatre (Colosseum) in El-Dzhem. The mere mention of this Tunisian architectural masterpiece evokes in many a desire to see it with my own eyes, to touch the history and wander through centuries-old ruins, which preserved the spirit of antiquity. This grandiose building of the reign of the Roman Empire in Tunisia every year attracts hundreds of tourists, both independently and in organized groups. In 1979 the Amphitheatre of El Jam was rightly included in the world heritage list of UNESCO.

It is often compared with the Colosseum in Rome, probably, hence its second name – the Colosseum, but this is not quite true, since the true Colosseum belongs only to Rome.

The amphitheatre Tunisia is located in the heart of the city of El JEM (El Jem). Due to the proximity of some resorts (Sousse, Monastir, Mahdia, Sfax), getting here will not be difficult. And it is a must do.

During the reign of the Roman Empire, the city of El JEM was called Tisk (Thysdrus) and was second in importance only to Carthage. Then, because of the favorable climate of the city was just full of olive groves. Olive oil in those days was very much appreciated (and now) and was equivalent almost to gold. Growing and selling olive oil, the Romans amassed no small fortune. However, in addition to the work needed to know and in entertainment. Therefore, the Roman proconsul Gordian I and decided to build the amphitheatre, where the rich could brighten up your leisure time. And the entertainment of the Romans were still those! The podium of the Colosseum could accommodate up to 35 thousand spectators who enthusiastically watched Gladiator fights, a battle between predators and like hungry lions tearing apart abandoned them at the mercy of prisoners and slaves. To recall the movie "Gladiator", several scenes of which were filmed here.

The amphitheatre consists of three floors (according to some sources there were four of them), with many arches. The height of the walls exceeds 30 meters, and the length of the oval scene has a size of 60 to 37 meters. Under the arena of the Amphitheater was designed with multiple rooms for the gladiators and slaves, cages for wild animals, etc.

Scientists are still arguing when the same was built by a Tunisian Amphitheatre. Presumably this date 230 years, but not later than 238 years. 238 G. was raised a rebellion whose aim was the election of the new Emperor (Gordian I), instead of all the hated Maximinus. The rebellion was defeated, and elected Gordian I managed to edit a total of 36 days. The city was destroyed and after was unable to recover and to regain its former importance. As for the Amphitheater, then up to the VII century, it was in one piece. Then the stones from it were used in the construction of a new city near the Amphitheatre now El JEM, as well as in the construction of the Mosque in Kairouan. He later played as a fortress. In the XVII century, was attacked by cannonballs, traces of which can be seen today in its walls.

However, now the Amphitheatre is impressive. Tourists today can walk on the stage and travel back a few centuries ago. Around and the spirit of the Roman Empire. And even though marble and mosaic has long been showered from the walls of the theater, many still say that the Tunisian Amphitheater looks much impressive than the Roman's "brother". In addition, even in our modern times here annually (July to August) passes the international festival of Symphony, because its acoustics are simply amazing.

The best time to visit the Amphitheatre – the second half of the day, in this time, you can take some good pictures.

Near the Amphitheatre is the Archaeological Museum, where also are the collection of Roman mosaics.

🚶 How to get there: the town of El JEM (El Jem) is situated about 80 kilometers from Monastir and from Sousse a little closer (the Colosseum on the map of Tunisia). You can get here by taxi (the luazh) from the corresponding station in every town (Mahdia, Sousse, Monastir, Hammamet), or taxi. From Sousse you can get on the budget train.

💵 Entrance fee / ticket price: 8 dinars (refer to the currency of Tunisia), photo – 1 Dinar (including a visit to the archaeological Museum).

Comments / recent posts on the topic on the forum
Re: Holiday in TunisiaNatalia D. 26 August, 2018
And I went to Tunisia this year for the second time. Last year was on the island of Djerba, this year in Hammamet. Both times very much! If last year enjoyed the beauty of the island, the service and hospitality of the hotel, this time came to Hammamet, budget three. Yes, the hotel is different from the 4 and 5 key but we deliberately chose this hotel. What a wonderful tour, beautiful sea, clean beach. The attitude towards us, Russian is very friendly. All the Tunisians we smile and say how like Russian. I'm surprised reading previous reviews. Do not know can be due to the fact that we were friendly disposed, and therefore to us as the same...the Animators of the hotel was very upset when we left, helped us with our Luggage, took photos for memory, some left their contacts. No one touched, not abused, was not theft. The guests loved it!!! ...
Re: Holiday in TunisiaZlata August 30, 2018
All kind time of day!
Went this year in August.
Liked it very much. Yes, there are disadvantages. But tell me, where doesn't?! If you look for only the negatives, they can gather a whole bunch in any country.
What of the downsides? Garbage. Yes, he's everywhere. But it doesn't smell bad, as some write, it is scattered with plastic bottles, bags, paper. Here, however, and all the disadvantages.
As for the local population. So blame yourself. How You feel about them, and they to You. The backlash has not been canceled. So want to have You warmly and friendly greeted, be nice to them. Tunisians are hospitable, welcoming and friendly. There was not a single case of even evil and look in our direction. So, as the saying goes: "If face is crooked...." Read Krylov. Moreover, quite interesting to talk to. I will say a few greetings in their language, and they simply melt away, ready to help You with everything.
Everywhere you can meet the police, so security don't worry.
What to see in the country? There are a couple of good excursions:
1. Day trips to Carthage, Sidi Bou said, Tunis (the capital);
2. Two days into the Sahara, the Colosseum, Kairouan, an oasis of Chebika, salt marshes.
I recommend very beautiful pictures are obtained, and the information informative.
So, friends, do not look for the negative, that is enough in our hard life in Russia. Rest with pleasure and bring only positive emotions.
Good luck! ...
Re: Holiday in TunisiaEdDDgAR August 30, 2018
Stay in principle bad can not be, and to learn something new is also very круто0 ...
Re: Holiday in TunisiaАлександр20082018 16 September, 2018
Vacationing in Tunisia in August, cockroaches in the room caught 2 times and 2 times on on the doors in the room about ants and aseret I vopsche silent. Lived in a Bungalow Aqua Park Spa 4ka . The Russians really don't like pesnite yourself that you are second grade. Will suit the Germans, the Europeans and automatically you are already standing behind them, and they serve out of turn. Went to Monastir and really quite messy, no wonder so many flies, who eat together from the same plate. In monastire us ran tunisis learn that we are Russian began to tell me how and where to go and where prices are cheaper, adding that Russian tourists 60% and if not they Tunisia would come kirdyk. This is the only Tunisian who was interested in Russian) . Yes, the tour is divided into foreigners and Russians together with the Baltic States. Impressions of the country are not unambiguous. But there is more than just not going. In Russian they understand when you want to. ...
Re: Holiday in TunisiaNadezhda Nikolaevna Sep 18, 2018
Hi all! Vacationing in Tunisia in Hammamet in September this year,the 4 star hotel Mirage.Think the rest will get what he wants.Settled immediately upon arrival without regard to the country,the staff is very friendly,all smiles,tried to talk,I ask how are you,like here or not.Was on 2 day trips in the Sahara.That's impressive.Drove almost throughout Tunisia,was a great guide,learned a lot.About the dirt guide also made explanations-the country is beginning to live again.By the way,yesterday went on the train to Paveletsky station.So on the way we saw so many abandoned debris that Tunisia never dreamed of.Take a look around,we, too, not all smooth and clean.And Tunisia the beautiful sea,the Sahara,with clean hotels and ordinary people,who also earn money in any way they can:sell,clean ,cook in hotels.By the way,the food was tasty and varied.A lot of fruit. ...
Re: Holiday in Tunisiagreekorn 19 September, 2018
Dear fellow citizens, always you will be treated the way you deserve))) Arrived in Tunisia alone, I went to the Gare de Tunis (railway station), and when I realized that at 8 PM in Sousse I can't go back (though I do not understand why), went on Stasen de luazh (on the bus) where just over 10 dinars very quickly left, got in 2 hours)) Roam on any streets, at any time and many people come to chat, say like Russia, constantly shouting "Russia" "Moscow" Saint-Petersburg" and the like))) Local cops in the amount of 4pcs, standing near his car in the square at night when nobody is around and there is no longer, waving, beckoning, well-chatted with them, laughed and I went to sleep with the road) And when you ambition and eternally disgruntled face something to ask or even appear anywhere and behave with people prinebrezhitelno and like a servant, it certainly would be awful for you, and everywhere))) And I want to say - sit at home or out in the countryside drove on vacation)) ...
Re: Holiday in TunisiaValena 17 October, 2018

Here I agree completely! Golden words! ...
Re: Holiday in TunisiaAnnarelli 8 August, 2019
Good afternoon.
Tunisia is an interesting country, and strange for our culture. As always there is a lot of positive , there are negative. But for the rest it is not mikroshemka of mold in the room to do, and try to relax, someone like seal on the beach, someone backpack behind and places of interest. There were kids last year in hotel Thapsus mahdija of the hotel is stated as a 3*, I liked everything and the sea and the hotel and catering and excursions planned, I do not like organized tours. This year we're going to the Sahara beach and I hope too it will be perfect. Did not notice the neglect of Russian, if you behave properly, then you will have the same attitude. ...
Re: Holiday in TunisiaSwallow 7 December, 2019

There is something in Tunisia children to watch? Type zoos, aquariums, and other prikolyuh? Or purely cultural heritage are for adults? Children are small and tours are obviously not for them. ...
Re: Holiday in Tunisiaadmin 7 December, 2019