The crime rate in Egypt is much lower than in most Western countries. Serious crimes are very rare. In cities and tourist areas is to be feared only petty thieves and pickpockets. Tourists rarely are victims of crime is that criminals are afraid of tourists and would rather steal something from his countrymen. You can without any worries walking around cities and tourist areas day and night, and rather to fear inadequate compatriots or foreign tourists than local residents.

Unfortunately, despite the security measures in 1997, 2004, 2005 and 2006 in Egypt was marked by terrorist attacks against foreigners, resulting in many casualties. After these events, the government has made numerous significant efforts to improve security.

Events January-February 2011 in Egypt may significantly change the image of the country, including tourists. Most likely the changes will affect security, and relations to tourists. To rectify the situation with the outflow of tourists, in tourist areas, the residents hold a peaceful demonstration to Express his good attitude towards tourists. Efforts for the return of tourists and makes the government. We hope that the situation will remain calm and recession events will happen, and Egypt will once again become a tourist Mecca for Russians. However, before you go on a trip to Egypt, explore the latest news about the situation in Egypt.

The Egyptians are very hospitable people. Don't be surprised if they will assist you, offer to drink tea, eat, or give you a lift free of charge – it is a common tradition.

However, in resort areas around the attractions, all very different. Unfortunately, for a business of there dealers tourists – bag of money, and therefore the attitude towards tourists on their part is appropriate. Very often you will be stuck with many molested who will sell trinkets at fantastic prices, offer guide services, camel rides, etc. In these matters they are very inventive. If you still seduced by "divorce" and understand it, don't be rude, don't swear or insult anyone. Just apologize, tell them you have no money, you do not need or you do not understand in a foreign language. If they cross the border, start looking for a policeman. It affects them very sobering.

It used to be that in order to get rid molested, it was enough to say: "I Russian", because everyone knew that the Russian had no money. This method of getting rid molested encouraged European tourists to impersonate a Russian. Now this method does not work because our compatriots manifested itself in the issue of spending not much more sensible the more affluent foreign tourists. But still, if you're not dressed provocatively rich and full of jewelry, you sparkle a stuffed wallet and an expensive camera, chance to be molested and subsequently cheated you have less.

But don't think that all Egyptians are often scammers and crooks. The majority of the population is still very friendly and always willing to help for free. 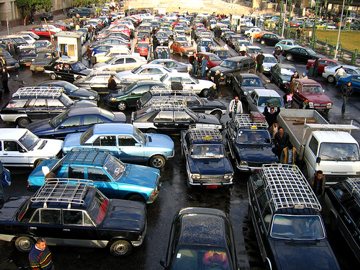 The behaviour of local drivers on the roads can be called a mess and chaos. It is no exaggeration to say that traffic rules here just don't exist, and if exist, then no one is going to follow. The drivers here are completely ignoring the road markings, don't use my Blinker, high beam in the evening and at night it is believed they act obscene and causes a rapid response in drivers of oncoming cars. The Egyptians almost never use the rear mirrors and side-on view, so your car can at any time to cut or "bortanut". To adjust to the sport of Egypt is almost impossible. To move as a pedestrian on busy streets, too difficult and should be careful.

If you, despite all the chaos on the roads, decide to rent a car, keep in mind the following information:

Rent a car you can average $50 a day. If you take a few days, you can save. In addition, you should before signing the contract to clarify the terms of the contract, often because the cost of rental includes a limit of a certain number of kilometers, and on top of all that, you'll have to pay extra. You can rent a car with a driver, it won't be much more expensive.

Another problem can arise with insurance: specific insurance is that any damage to the vehicle you will have to pay a penalty worth several hundred dollars, regardless of severity of injury and how it happened. You should not believe the words of the agents that you will have to pay only in the event of a serious accident is not true. In addition to a fine you will likely lose your Deposit.

You will have full freedom of movement in the car as everywhere on the roads (especially after the events of January-February 2011) are checkpoints, and the rules foreigners can not move independently around the country without guards. Most likely you will not be allowed out of the area (city) where you took the car.

There is also a big problem with paying the fines. In case you are stopped for breaking the rules, you would remove the log on the car. To get him back, you will have to pay the fine, and the procedure is the same long and dreary, as in Russia: you will need to pay the fine at a Bank and personally submit it to the police station on the territory of which you were fined. If you don't do this and return the registration certificate to the owners, then, thanks to their efforts, you will be allowed to leave the country.

In order to rent a car you must:

Medicine and pharmacy in Egypt are very well developed. Pharmacies in Egypt are everywhere, drugs are inexpensive and meet international standards. Usually in drugstores and the seller, and the doctor (pharmacist). In pharmacies you can find all the necessary and common drugs, hygiene products, care products for hair and skin.

Medical services in Egypt are very expensive, so it is better to have insurance. Call the doctor without insurance is approximately $ 30.

For entry into Egypt are no mandatory vaccinations, however, the who recommends that before you travel to get the following vaccinations: tetanus, diphtheria, rubella and polio, hepatitis b, measles, mumps.

Comments / recent posts on the topic on the forum
Planning a trip to EgyptsunMYLOVE Jan 12, 2016
In Egypt not so expensive, it is possible for the sea to relax, and to travel. You can eat in the hotel, the Swiss table, the choice is too big. ...
Transport of EgyptsunMYLOVE March 21, 2016
If you have several people can you rent a car, convenient. ...
Tell me the hotel for a relaxing holiday in Hurghadaolgaolgina16 18 October, 2016
There is also a large hotel where you can relax without animation. ...
Hurghada or Sharm El SheikhMiLoVa 12 May, 2018
By the way, if to drive off from Hurghada a little bit, you will find yourself in Makadi Bay, where the local population does not live - it is purely a tourist place, there are concentrated only hotels. We liked it. ...
Is it safe now to travel to Egypt?rainbow 18 July, 2018
dangerous even to the bakery for bread to go .if you afraid of everything .you have to stay at home. ...
You would have stayed in Egypt?Anafiel 9 July, 2019
No, the sandstorms, the city without greenery, the hot the cold, the huge mosquitoes... brrr. And debris. Mountains of debris. And people are quite different. ...
Excursion to the "Coloured canyon", Egyptnausla August 31, 2019
In vain. I was not, for example.
I was only interested in the sea. ...
What to bring from Egypt?Burenina Nataliya 29 September, 2019
Useless Souvenirs and magnets have long trips don't drive. Prefer that you can drink or eat, in one word something practical. I brought tea, coffee (not great, but it's OK), I cite every time the teas from different roots and herbs, they are delicious and fresh there. Brought spices. Bought myself a cotton dress and cotton summer blouses. All good quality and our money is very cheap. A friend brought the wine Omar Khayyam, there are white and pink. She already knew this wine, I tried - I did not like. But I do not drink alcohol, he told me the whole don't like. It is still possible to buy natural soap, oil and perfume. My friend's husband is Egyptian, he lives in Egypt and she's here in Moscow. She enjoys and loves balms like our stars, hair oil, natural soap. ...
Have you ever been in Egypt?nausla 29 September, 2019
The main direction of course of the Red sea, there will not argue.
And this is understandable, such a diversity of underwater life anywhere close will not see.
In fact, those who understand, go not into Egypt namely the sea. :D
And go for a short time.
But there is also a "Radialka" in Cairo, desert, Abu Simbel, etc.:) ...
The pros and cons of EgyptRobert December 5, 2019
Hi! In Egypt, I was 2 times: with friends, with my wife (then fiancee). Teammates took the hotel Logaina Sharm Resorts. What do You say? The guy who greeted us at reception, in English, of course, speaking with great difficulty. With him and sign language you can learn. The apartment was dirty – probably the tenants had just moved and all have not yet. We all understand, of course, but what do we do? On the floor was kind of sticky puddle that was removed for some reason in the last turn. Immediately not advise staying in it! Took 2 bedroom apartment and of course expect the best, like all normal people.
Wife and I took a room at the Old Vic Resort Sharm. Here was completely different. Took a standard double room with one bed. It is small, but for two people very spacious. Unlike Logaina Sharm Resorts – clean. Just say that the wife in open spaces – the sea, the oceans are afraid to swim, she has this phobia since childhood. So she attacked storm the pool. And again it's "different"! Unlike pool Logaina Sharm Resorts, it is clear that it is clean. Because the passing hair and leftovers – not the most pleasant thing I can tell you. Staff is friendly and language barriers they have.
Egypt, of course, incredible. There are pyramids, temples, pharaohs. This antiquity leaves no one indifferent and invites you to plunge into the depth of centuries. Due to the fact that there are always hot – you can arrive at any time. If I'm not mistaken, even in winter the water temperature is 20+. A lot of attractions. The temple of Luxor, the Palace and Park of Montazah, St. Catherine's Monastery, coloured canyon, the great Sphinx, the pyramid of Cheops...and so on. Internet in POM ...
To reply or discuss the topic on the forum
CONNECT
⌃
✖Календарь недорогих авиабилетов